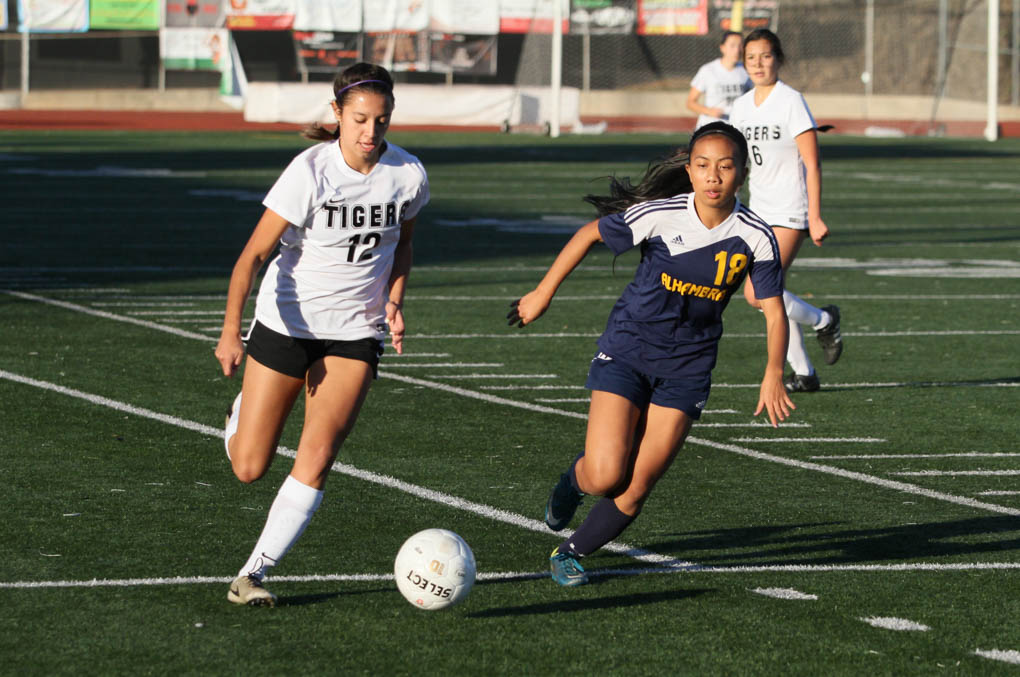 At its first away preseason game, the varsity girls’ soccer team clinched its second win against the Marshall Fundamental Eagles on Tuesday, December 6 by a score of 3-0. Between multiple precise shots and an unwavering defense, the Tigers demonstrated authority over Marshall’s team and set their overall season record at 2-0-1.

As the game begun, the Tigers quickly sliced through opposition, keeping the ball in Eagle territory. Early on, freshman Corey Segal made a promising shot that fell directly into the goalie’s hands. Although unsuccessful, the first attempt reflected the Tigers’ fighting spirit. Each time the ball fell into Tiger terrain, South Pas defense, including standout senior Sara Jaime, ricocheted the ball back towards the other side. Junior Emily Dunn launched a corner kick cleanly into Tiger possession midway through the first half, allowing sophomore Jade Myer to score the first goal of the game off of a header.

The match continued with steady ball movement back and forth between the two teams, including a close Marshall Fundamental shot saved by a timely header on Jaime’s behalf. After some time, South Pas offense once again dribbled and passed the ball back into the Eagles’ goal box. Senior Jayda Weeks took advantage of an opening yet was unfortunately blocked by the goalie. The ball was punted by the Eagle goalie, but it was promptly kicked back up to the Tiger striking zone. Weeks capitalized on Marshall’s vulnerability and made a redeeming shot which secured the girls’ second goal– with mere seconds left in the first half.

In comparison to its earlier performance, the subsequent half went less smoothly for South Pas. The Eagles were able to dig deep into Tiger territory, keeping possession for most of the third quarter. Marshall’s girls even fired a few accurate shots, albeit junior goalkeeper Sophie Reynolds was able to effortlessly defend her box. In the fourth quarter, the game took a turn in favor of the Tigers. Dunn took an assertive goal shot that bounced in and out of the goalie’s grip, in which junior Harper Fox followed through with the third and final goal.

“We did well especially considering the condition of the field. We were able to make those shots because our team was completely in sync as well as aggressive.” Weeks said. “In the future, I think we can work on connecting passes with each other, and also work on finishing– it’s our biggest weakness.”

The Tigers look forward to maintaining their undefeated season record at their next away game against Mark Keppel High School on Thursday, December 8.