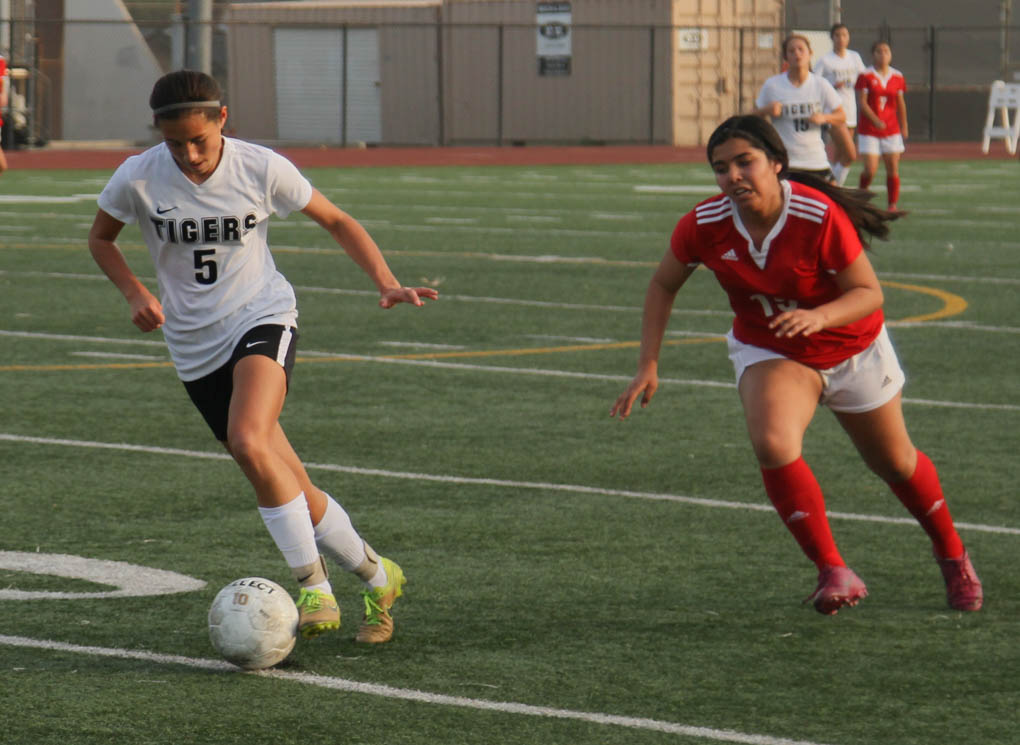 At its fifth preseason game at home, the varsity girls’ soccer team prevailed over the Sierra Vista Dons by a score of 2-1 on Tuesday, December 13. The Tigers showcased dynamic effort on the strikers’ and defenders’ part, setting their overall season record at 3-1-1.

As the match began, the Dons hastily agitated the Tiger backline. Juggling and passing their way through the South Pas defense, the Dons attempted three separate shots, each coming alarmingly close to the net. Although blocked by junior goalkeeper Sophie Reynolds, the early scare established the atmosphere of the match. South Pas and Sierra Vista battled with high intensity; one could sense the urgency that the girls played with, even as early as the first few minutes. Possession switched constantly, as both teams wished to assert dominance. Eventually, key South Pas players helped to move the ball far into Don territory, positioning superb shots for the Tiger strikers. Sophomore standout Rainey Tilley along with freshman Corey Segal efficiently and persistently pierced through Dons guard, weaving in and out of opposition.

Midway through the half, the Tigers found themselves in a perfect circumstance to score. With an assist from Segal, sophomore Uma Hornish shot a robust ball that flew past the keeper, capturing the Tigers’ first goal. Longing to strike back, the Dons competed diligently for the ball, managing to bring it back into Tiger territory. But South Pas used their building momentum to launch the ball back into the Dons’ goal box, eager to score again. Senior Amelia De Young attempted a shot, which was blocked by the keeper. Unfazed, the Tiger offense continued to hammer away at Sierra Vista’s defense. Their perseverance bore fruit, as Segal was able to take an awry ball from a tackled Tilley and punt a direct shot into the goal. For the remainder of the half, South Pas kept the pressure high on Sierra Vista.

“Today I was happy that we connected a lot of passes,” commented Tilley. “I think it was great that we were able to quickly move the ball from one side to the other, giving us the opportunity to go forward and score.”

In a similar manner to the first, the Dons opened the second half with aggressive fervor. Sierra Vista offense instantly brought the ball to the Tigers’ goal box and took a determined shot. Diving to the far end of the net, sophomore goalkeeper Noemi Howland blocked in an impressive save. Again, this abrupt Sierra Vista initiative perpetuated the dire mood of the match. Tigers and Dons alike fought fiercely for control– so much that many calls were made by referees on both teams. Despite the fact that Tiger defense remained virtually impenetrable, it would be a Dons penalty kick that would allow them to acquire their first and only goal. South Pas, too, had their fair share of attempts, as junior defender Riley Segal capitalized on multiple free kicks granted to the Tigers. Ultimately, South Pas stayed offensively supreme, but was not able to procure any more goals.

“Getting up during the first half 2-0 was definitely a highlight. Both of the goals we made were as close to textbook as possible. They weren’t deflections or flukes; both of them were powerful shots that finished on goal. It was something we needed; so far, I don’t think we’ve had the ability to come out strong like that.” said head coach Victoria Lathrop. “But, we gave up that one [Sierra Vista] goal because of our issue with communication. I’ll give them credit, when the girls had possession and strung two or three passes together, they looked like a really good team. But, we will continue to work on maintaining composure and not letting other teams get back in the game like [Sierra Vista] did today.”

With the drive to establish a winning streak, the Tigers will face Schurr High School at home on Thursday, December 15.