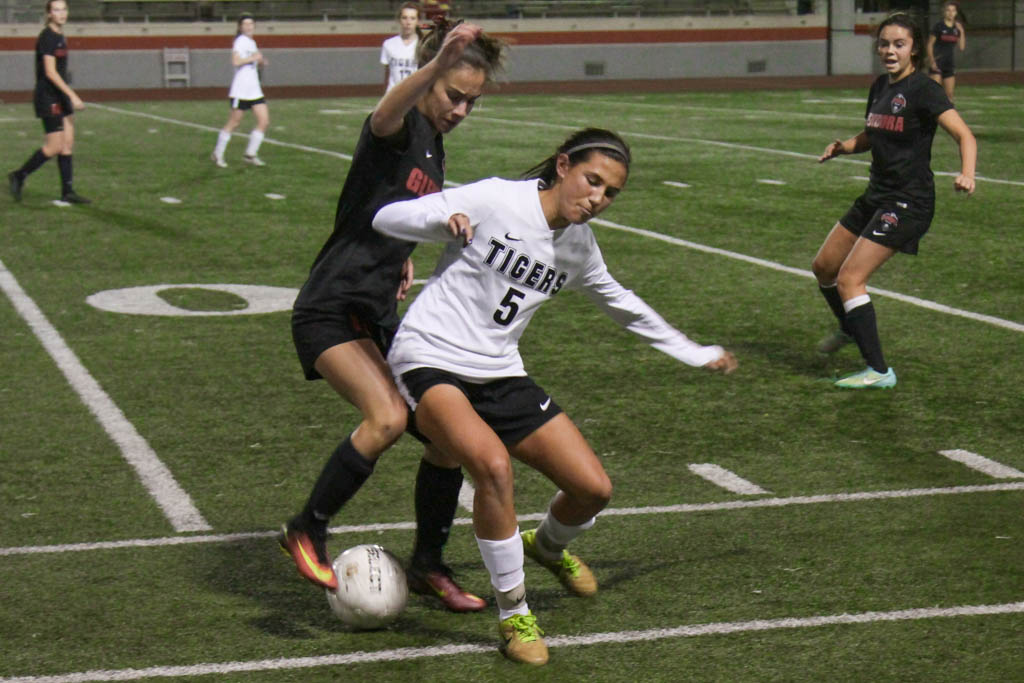 The varsity girls’ soccer team dominated the Bassett Olympians during its final preseason game by a score of 11-0 on Wednesday, December 21. The Tigers showcased an impressive offensive presentation which sets their season record at 4-2-2.

Immediately following kickoff, it was clear that South Pas held authority over Bassett. The Tiger offense took no time to move the ball into Olympian territory, building an unstoppable momentum that would carry them throughout the course of the match. South Pas’ initial goal was scored by sophomore midfielder Rainey Tilley, who capitalized on a cross from sophomore striker Jenna Noueihed. The Tigers’ ability to connect passes was the determining factor that would ensure their imposing victory. Sophomore midfielder Uma Hornish secured the second goal by outmaneuvering Bassett’s defense, while junior forward Cate Latting seized the third with an assist from senior forward Jayda Weeks. Frustrated from their early failure, the Olympians began to play recklessly, fouling the Tigers on multiple accounts. Junior defender Riley Segal then took advantage of a free kick to directly shoot the ball into the net, clinching the fourth goal. Eager to assert Tiger sovereignty, powerhouse Latting pulled off a hat-trick, bypassing Olympian defense and scoring the fifth and sixth goals.

“I think we really did deserve to just crush a team,” Latting joked. “But seriously, I was so glad to see our efforts pay off because we have been working so hard for the past couple games. We tried out a new diamond formation for our midfield and were able to pass circles around Bassett.”

Because of the team’s early success, head coach Victoria Lathrop was able to sub in less experienced players and experiment with positions in the second half. This is where Tiger capability across the board was able to shine. Despite the unaccustomed approach, South Pas still acquired another five goals. In the first few minutes, junior striker Harper Fox quickly set a precedence of superiority as she aggressively drilled through Olympian guard and shot the ball into the net. Soon after, Fox scored her second goal with help from freshman Corey Segal. Pressuring Bassett, sophomore midfielder Jade Myer headed in the ninth goal of the match, following up an attempt from junior midfielder Emily Dunn. Dunn soon fired a shot from outside the eighteen-yard box, and it hit the back of the net. Closing out the match with minutes to spare, C. Segal dribbled the ball up and scored the eleventh and final goal.

Obviously, the Tigers found such triumph due to the dazzling performance from many strikers. But, it was the Tiger mid and back line that would prevent the Olympians from scoring any goals. Sophomore defender Alyssa Bonk played a key role in keeping the ball deep in Olympian territory, while senior defender Sara Jaime sent all Olympian endeavors flying back.

“We tried a new system of play today, and it was a great test to put some new people in different positions and focus on maintaining possession of the ball,” head coach Lathrop said. “The fact that we could make those changes, but the level of play didn’t drop shows the skill of all our players. I’m excited to see what the new year has in store for us.”

The Tigers will face off Monrovia at their first league match at home on Wednesday, January 11. As they dive into league games, the girls hope that their outstanding performance at Bassett will foreshadow the trajectory of their 2017 season.