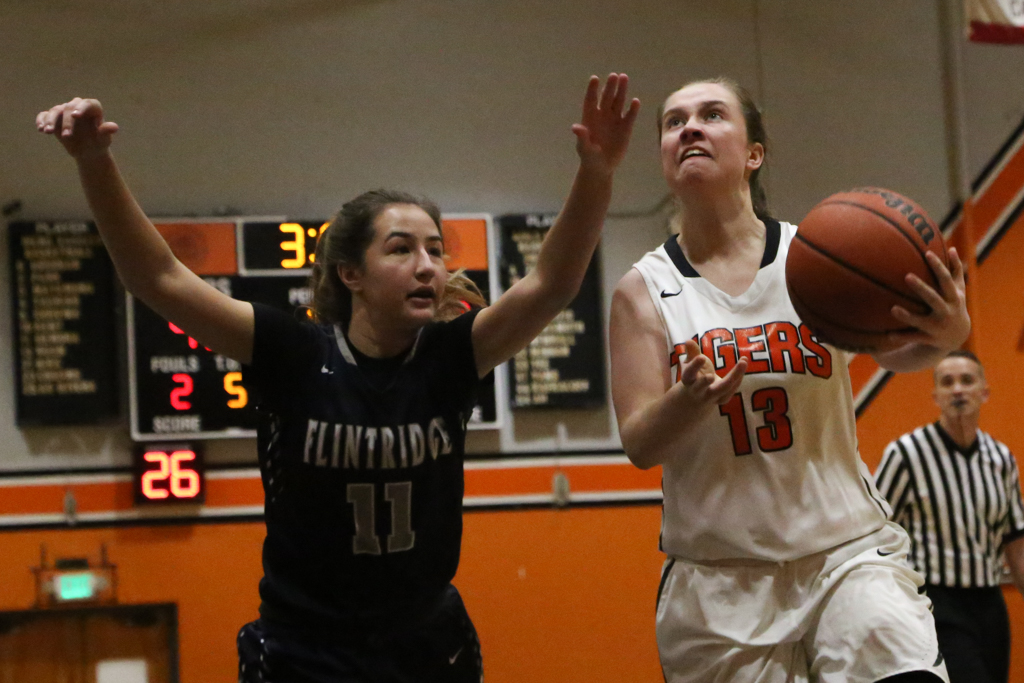 Junior Flannery Clark drives to the rim during South Pasadena's narrow victory over Flintridge prep. Despite seeming dominant early, the team appeared to falter, subsequently allowing its adversary to reenter the game.

Girls’ basketball defeated Flintridge Prep, 60-57, on December 15, at South Pasadena High School. The Tigers’ stamina kept them in the lead for the entirety of the game.

Sophomore Charlize Kruzic opened the game with the first of her many three pointers. Flintridge Prep was unable to sustain possessions, as score against South Pasadena’s coverage. As the game wore on, the Rebels became more aggressive and started fouling more frequently, often leaving South Pas players scrambling on the ground. The change in tone became more violent and tense as the game progressed. However, South Pasadena maintained constant passing and worked to end the first quarter 19-14, Tigers.

Again, the Tigers scored the first point of the quarter with a layup from junior Lauren Kafkaloff. Prep lacked ball security and let South Pas hold possession often. Eventually, the Tigers began to stop talking, accustomed to a scoring routine, and Prep’s score began to climb. Throughout this, senior Tiffany Holmes remained confident. She kept possession for her team and led them in charges to the net. As the game intensified, so did the coaches. The Rebels’ coach received a warning for disrupting the game and criticizing the ref. Second period ended just the way it had started: with the Tigers putting ball in net.

Kafkaloff led her teammates into the second half with another dead-on free throw from a foul. Prep, somewhat in a daze, gradually lost the little ground they had gained in the previous quarter. They began to get desperate and more pushy, resorting to body force over skill. South Pasadena, the smaller team, remained undeterred and the lead was solidified by sophomore Megan Yee’s shot from deep, completely uncontested. More South Pasadena players fell as elbows were thrown while Prep boxed them out and prevented movement. But when junior Flannery Clark re-entered the court, her carefully planned fakes fooled Prep players left and right, allowing the Tigers to gain ground. When Clark was on the court for this period, longer than her usual playing time, the team made more plays and slowed down the pace of the play to their control. Prep remained stubborn, however, and scored in succession several times towards the end of the quarter. South Pas remained in the lead – barely.

Prep opened the final quarter with first basket. This three pointer cut the Tiger’s lead to three points. South Pasadena, flustered, lost its aggression and collection on the court, leading to a few wild balls. When Prep scored on its next free throw, this led to a series of back and forth all-or-nothings with the game fervor rising. A Rebel player went down after a sudden calf cramp. The whistle was blown and the player was given just enough time to recover. With the score at 54-53, South Pas, the room waited, holding bated breath, to see how the game would end. With just one minute on the clock, a controlled focus possessed South Pas as they ran down the clock to keep them in the lead for a 60-57 win. Although the rebels had two more possessions and three last shot attempts, the Tigers kept them at bay. The game ended just as Prep shot and missed the basket.

“I’m really proud of how the game went today. I think that this was one of our better games, even though it was super close,” Clark said. “You get stronger when you’re challenged so next game I want us to come out with even more intenseness and ferocity.”

The Tigers will have their next game on Tuesday, December 19, against Poly at the SPHS gym.

The players names are misspelled and the score is wrong. This was a very exciting and well played game on both sides. It is unfortunate that the writer does not understand basketball and must be asking around for information. The story is lost in translation. Photo is also very unflattering. There should be mention that Sophomore Charlize Kruzic (not Charliss) made 5 three point shots and led the team in scoring. The game did not end “as the final South Pas shot went through the basket.” With 30 seconds remaining and a one point lead, South Pas tried to run the clock down, Megan Yee (not Megyn) made a clutch floater. In the last 20 seconds, there were two more Rebel possessions, and the Rebels had three last shot attempts.