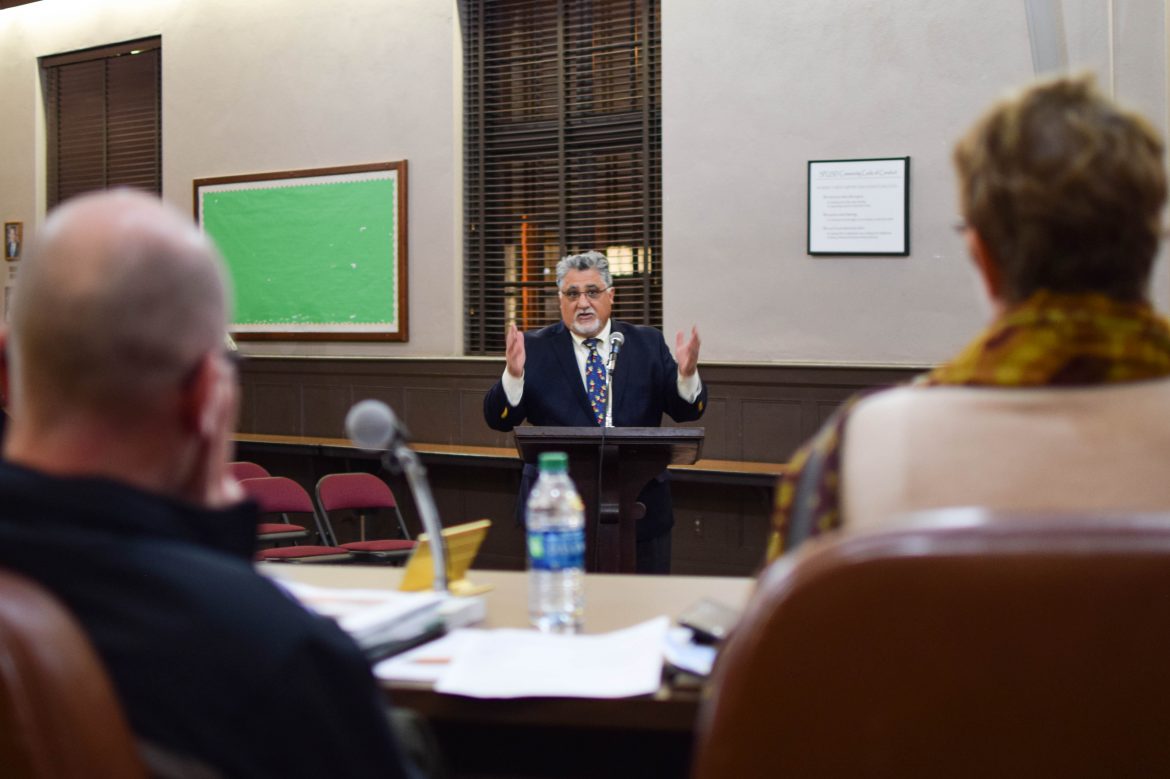 Senator Anthony Portantino advocates for his bill to push back school start times during a school board meeting. Senator Portantino argued strongly for his bill's rationale: to alleviate the 'epidemic' regarding student sleep deprivation.

Senator Anthony Portantino called for support of later school start times, a national health issue, in his annual educational and fiscal updates to the South Pasadena School Board. While other districts across the nation have introduced late starts, South Pasadena and many other school districts in California have not. Portantino has reintroduced his bill, SB 328, for the second year in its two year legislative process due to hesitation by school boards throughout California and the large amount of research that backs his bill.

If approved by the California Assembly, SB 328 would force all California school districts to introduce a start time of 8:30 within three years, a time strongly recommended by researchers.

Portantino criticized school districts for delaying later starts, calling on  sleep deprivation as an epidemic, and that the issue should not be disregarded by education officials on a local level. The Senator based his argument heavily on the science behind start times and used La Cañada’s recent transition to later start times as an example of an effective late start system.

While a community as educated as La Cañada has noticed the benefit of a schedule with a later start time, the California School Board Association (CSBA), an important association in California’s education system, has become “the biggest thorn” in Portantino’s side. According to Portantino, the CSBA’s actions and tactics are deplorable in an issue which affects the wellbeing of every student in what has become a public health issue, not a local control issue. In Portantino’s first attempt to pass the bill, the CSBA opposed the bill on the grounds that the issue should be under the control of local school boards and should not be mandated by the state Legislature.

“The CSBA has been horrible, Portantino said, “they have been fighting this tooth and nail and I don’t understand why. They should be putting the best interests of kids first and they’re not.”

“We have no timeframe right now,” School Board president Jon Priumth said, “we don’t want to impose these changes on administrators.”

Primuth has said that there is nothing stopping the implementation of a schedule with later starts, but expressed some opposition to the idea of disrupting other school activities. He expressed concern for testing schedules, readjusting curriculum, and disrupting teaching schedules, yet many teachers support later school start times due to the effect on student’s performance. According to Primuth, districts have struggled to introduce later starts smoothly, and that a rough implementation would disrupt curriculum, yet a shift in the day by an hour would have the potential to leave curriculum as it is currently.

SPUSD shared the same concerns for athletic activities and other after school activities in April 2017 when Portantino discussed the need for later start times in a Town Hall discussion at PCC.

Primuth echoed the idea from Dr. Michele Kipke, a fellow board member, that the board needs to take more time and look at the issue more in depth.

Many opposers of the bill, including the CSBA who misrepresented a study on sleep from England as a study from Harvard researchers, claim that zero periods and after school sports practices and activities would be disrupted. However, the bill does not affect zero periods and has been proven to increase attendance and boost participation and performance in sports practices, according to Portantino. The senator also mentioned coaches who often oppose a push back in start times, but later notice that practices become more productive due to students being more alert.

La Cañada, a primary example of locally implemented late starts, began to apply late starts incrementally, beginning with one day a week in the 2016-2017 school year, to a full five days per week in the 2017-2018 school year. Now, the La Cañada school district will survey parents, students, and teachers to investigate the benefits of later start times, including the effect on a student’s mental health.

Late starts have been proven to benefit the overall health and behavior of a teenage student. The Center for Disease Control and the National Parent-Teacher Association both support the research that Portantino built bill SB 328 on.

Each study supporting Portantino’s bill shares two similar ideas, failure to adjust education schedules to a teenagers sleep habits will result in sleep deprivation, and that this sleep loss has major effects on a teen’s physical and mental health.

“Failure to adjust education timetables to this biological change leads to systematic, chronic and unrecoverable sleep loss,” a study in the Learning, Media, and Technology Journal says, “This level of sleep loss causes impairment to physiological, metabolic and psychological health in adolescents while they are undergoing other major physical and neurological changes.”

This study highlights the significance of how sleep deprivation leads to problems with teenagers circadian timing system, or a teenager’s internal 24-hour timekeeper and by extension a student’s health and academic performance.

Studies critical to bill SB 328 can be found here.

“As a mother of a 17 year old, I have my own evidence that these kids really need to sleep in a little bit later,” Dr. Kipke said, who mentioned the effect an early wake up time has on her own daughter.