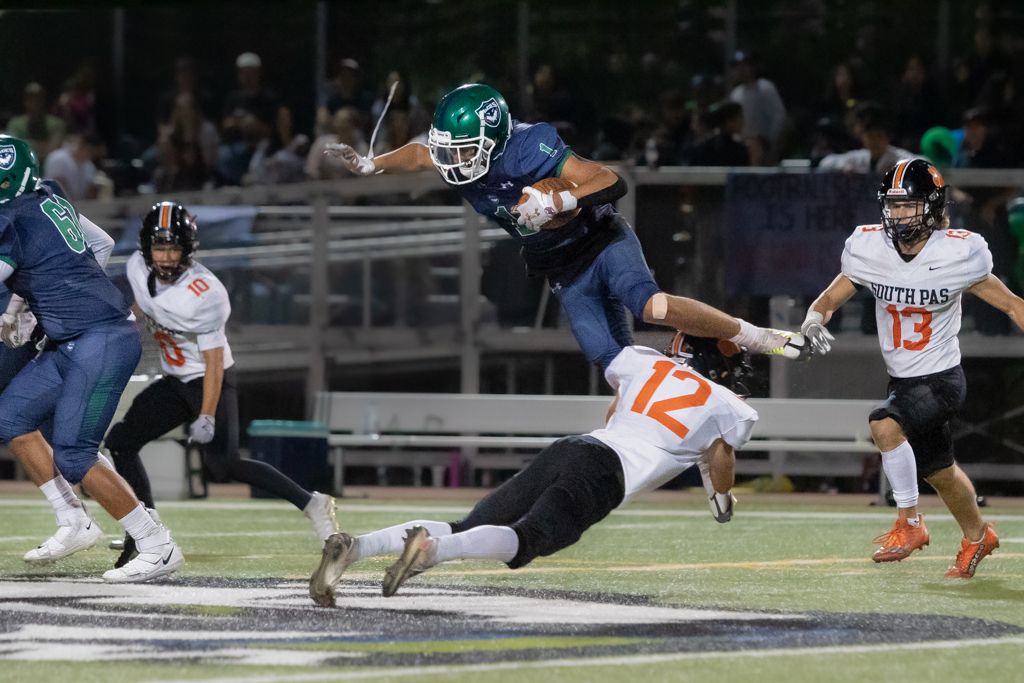 South Pas began with a blazing start in the first quarter as Hong sprinted along the sideline and gained 30 yards to jump-start the offense. After a pair of incompletions and a short run, it appeared the drive had stalled. Hong, however, had other plans. He leapt into the air and extended the ball across the goaline for a touchdown. Two minutes into the game, South Pas had claimed a 7-0 lead.

Senior linebacker Quinn Sterling made key tackles to force Maywood to turn the ball over on downs on their first drive. South Pas would take advantage of favorable field position, starting with senior quarterback Jackson Freking’s well-timed pass to Sterling. Near the end zone, Hong barreled past defenders for his second score of the game. Senior kicker Aidan Kinney converted an extra point, and South Pas led 14-0 midway through the first quarter.

Maywood continued to trust their running game, but it was to no avail. Junior cornerback Harrison Farley and Riffle converged on tackles, and the quarterback fumbled the football. Junior linebacker Carlo Williams recovered the ball for South Pas.

Hong exploded through a seam in the defense and ran 50 yards to the end zone during the next play. This electric effort would be negated by a holding penalty. In the midst of a dominant individual performance, Hong would have to wait another drive to score his third touchdown.

Kinney, Dowd, and Eshom relentlessly pressured and overwhelmed Maywood’s offense. On the third down play, Eshom’s defense collapsed the pocket and forced the quarterback into the end zone, where he was brought down for a safety. South Pas extended its lead to 16-0 midway through the second quarter.

South Pas’s offense was clicking on the next drive, beginning with senior running back Matthew Takasugi gaining yards on the ground. Next, Freking rolled out to his left and delivered a pass to Conti, who had once again evaded his defender and found open space. Hong then punched it in for his third touchdown of the game, and South Pas extended their lead to an insurmountable 23-0.

“[Because of the] blocking, we were able to pin them inside and run outside,” Hong said. “It was great blocking by the O-line and great calls by the offensive coordinator.”

Eshom continued to wreak havoc on Maywood’s offense. Athletic plays from Kinney and Dowd were too much for Maywood, forcing them to turn the ball over on downs. During the very next play, Freking hit a wide-open Conti in stride. Conti picked apart Maywood’s secondary, running undefendable routes and catching a pair of touchdowns on the night.

Riffle and senior safety Jason Yipp made strong plays in coverage, and Hong made a defensive impact with a physical tackle and interception in the final drive of the first half, already leading by 30 points.

The game was already out of reach for Maywood entering the third quarter and South Pas wrapped up as the clock ran out. Senior defensive tackles Ivan Becerra and Isaiah Cooper made tackles, and a Maywood fumble was recovered by Dowd. Maywood fumbled the ball six times in total.

Junior running back Zeke Gavlak took over the rushing duties in the third quarter, and burst through the defense, showing off his speed on a touchdown run. Maywood went on to score their first and only points of the night in the fourth quarter, preventing a shutout. South Pas ran out the clock to complete a wire-to-wire victory.

The defensive line has been impenetrable through the first two games of the season, and Freking has led the offense to an average of 32 points per game. The team is firing on all cylinders early in the year, and it is difficult to imagine a better start to the season for South Pasadena football.

“Everyday at practice we [have to] keep going, keep practicing hard and [on] Friday nights we will deliver like this,” Hong said.

South Pas will look to carry this momentum into a home game against John Marshall High School on Thursday, Sep. 1.