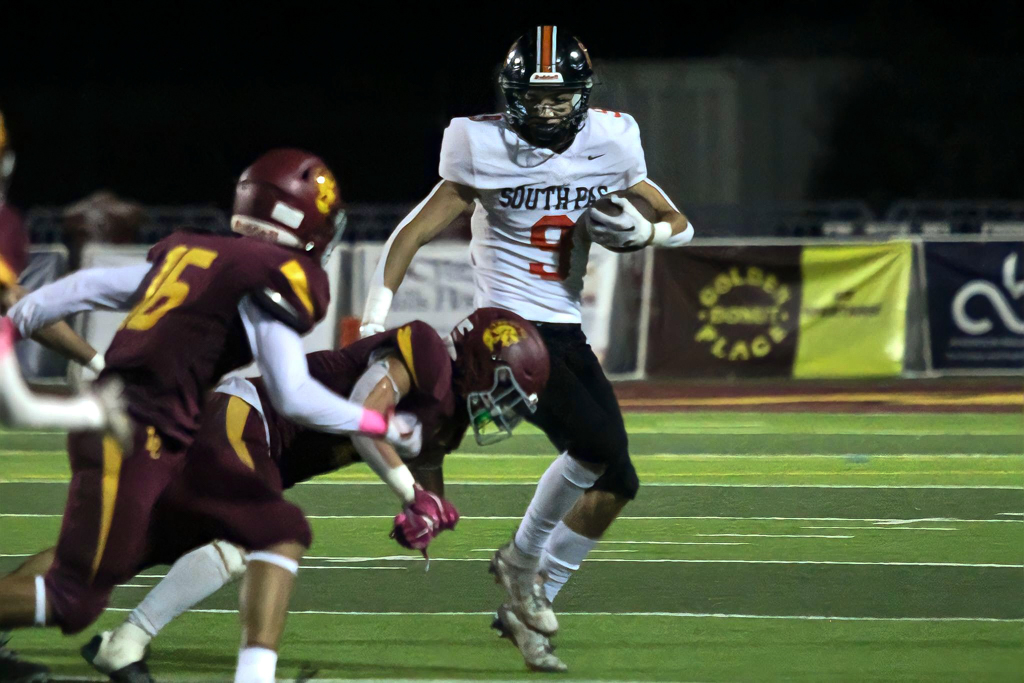 Behind an unstoppable offense and 41 points, the Tigers got the best of the Spartans on Friday's back-and-forth contest.

Football ousted the La Cañada Spartans on Friday, October 14th, winning the shootout by a final score of 41-35. Playing on La Cañada’s turf, South Pasadena showed off its big play offense en route to a critical league victory. The Tigers improved to 2-1 in league play with the win.

The two teams didn’t waste any time jump-starting the offense. La Cañada’s quarterback set the tone with a first down run. After sophomore defensive end James Dowd flew in to tackle the Spartan’s running back, it appeared the drive had stalled and La Cañada was destined for a punt. Instead, the Spartans converted a fourth down pass that took them all the way to the end zone for an opening touchdown.

When South Pas got its first chance, they answered by marching down the field. Senior wide receiver Nick Eshom gained yards on a jet-sweep and junior running back Jason Hong moved the chains with a strong run. Then, senior quarterback Jackson Freking rolled to his left and fired the ball 40 yards downfield to senior wide receiver Richard Conti. Conti caught the ball in stride and blazed down the sideline for his first touchdown of the game. The extra point was blocked so South Pas still trailed 7-6.

La Cañada’s response was a grueling, 15-play drive that took the rest of the first quarter. Junior cornerback Luke Riffle made a strong tackle in space as La Cañada’s running back maneuvered through the defense. The Spartans found themselves in a fourth-and-one situation and picked up the first down on a short run. After senior defensive end Isaiah Cooper lit up La Cañada’s running back, the Spartans faced another fourth down. And once again, La Cañada pulled the trigger on a fourth down attempt and converted it. As the Spartans approached the end zone, senior defensive tackle Dylan Feak sacked the quarterback and pressure from senior linebacker Matthew Takasugi forced an incompletition. The Spartans continued their spree of aggression, attempting a fourth-and-19. This time, the pass fell incomplete and South Pas took over.

The Tigers next drive was commanded by Hong and fellow running back: junior Giovanni Cruz. The duo slipped tackles on first down runs, setting up South Pas deep in La Cañada territory. Freking floated a pass to the back of the end zone, looking for senior wide receiver Quinn Sterling, but the pass was broken up. On the next play, Hong cut outside and outran Spartan defenders into the end zone. Hong also scored the two-point conversion, giving South Pas a 14-7 advantage.

Senior cornerback Jason Yipp showcased his athleticism by breaking up a deep ball intended for a Spartans wide receiver. Just as La Cañada’s offense was gaining rhythm with a potent running game, Takasugi and Dowd combined for a sack to shut down the drive. Once again refusing to punt, the Spartans attempted the fourth down, but a physical tackle by Feak got the ball back to South Pas.

Riffle got a carry as running back to start the Tigers next drive. Then, South Pas’ big play offense was on full display and Freking once again fired the ball downfield to Conti who tiptoed down the sideline and into the end zone to extend the Tigers lead. The Freking to Conti connection proved to be unstoppable against the Spartans.

La Cañada had an answer however, responding with a deep ball of their own. Coverage broke down and the Spartans quarterback hit his wide receiver in stride for a touchdown. The deficit was cut to 21-14 late in the second quarter.

The Spartans continued their momentum on the kickoff. The ball caromed off of a South Pas player and was recovered by La Cañada. The Spartans quarterback commanded the drive with both his arm and legs, scrambling out of the pocket to make plays. La Cañada scored a rushing touchdown and tied the game at 21-21. In a contest that once looked like South Pas would dominate La Cañada, the game was tied going into halftime.

Second half action began with a Cruz run and another Conti catch. However, in Spartan territory, Freking was sacked and the ball popped loose. La Cañada recovered the football to gain possession. After Sterling and junior defensive end Sawyer Fox came up with tackles, the quarterback forced the ball into tight coverage where Riffle was waiting to pick off the pass.

South Pas adopted a more methodical approach on the next drive, wearing down the defense with runs by Cruz and a first down catch by Dowd. Next, Hong dodged past defenders and spun his way into the end zone for a touchdown. South Pas had regained the lead, 28-21.

La Cañada only needed two plays to come back and tie the game once again. The Spartan quarterback scrambled for yards, and La Cañada’s running back knifed through the secondary and marched all the way to the end zone for a touchdown.

The fourth quarter began but the offensive fireworks were far from over. After a penalty to start the Tigers next drive, a pair of short runs and an incompletion had South Pas with their backs against the wall. In critical sports, such as the fourth down situation that awaited the offense, Freking and Conti find a way to shred defenses. This play was no different, and Freking hucked the ball downfield with Conti waiting on the receiving end. Conti hauled in the pass, slipped a tackle, and sprinted all the way to the end zone to complete his hat-trick of touchdowns.

La Cañada, however, refused to cave in. Riding an unstoppable running game, the Spartans marched down the field and tied the game at 35-35 with a rushing touchdown. South Pas took over possession and Eshom gained ground. After Freking threw the ball away and Conti caught a short pass, the Tigers were in another disadvantageous fourth down situation. Once again, Freking was looking for Conti. The Tigers quarterback rolled out to his right, leapt in the air as he threw the pass, and threw the ball to Conti. Conti reached deep into his bag of tricks to sneak past defenders, and somehow managed to walk untouched into the end zone. This electric play had the South Pas bleachers erupting.

Conti’s fourth touchdown of the night gave the Tigers a 41-35 lead, but the extra point was blocked. With a minute left in the game, South Pas needed one stop to secure the victory.

La Cañada’s running back refused to be brought down, and carried Tigers defenders with him all the way to the South Pas ten yard line. It looked as though the Spartans were destined to score a touchdown when Dowd came up with a timely sack to force La Cañada into a passing situation. On a third down, a desperate heave to the end zone was broken up by Yipp. On fourth down, the Spartans quarterback once again threw a prayer to the end zone. Riffle picked off the pass, his second interception of the night, and South Pas won 41-35. The Tigers sidelined exploded in celebration.

Conti had 275 receiving yards and four touchdowns to propel South Pas to victory. The wild, back-and-forth shootout favored the Tigers, who now hold a 2-1 league record.

South Pas will travel to the historic L.A. Coliseum to take on the Poly Panthers next Thursday, Oct. 20, at 7:30 P.M.