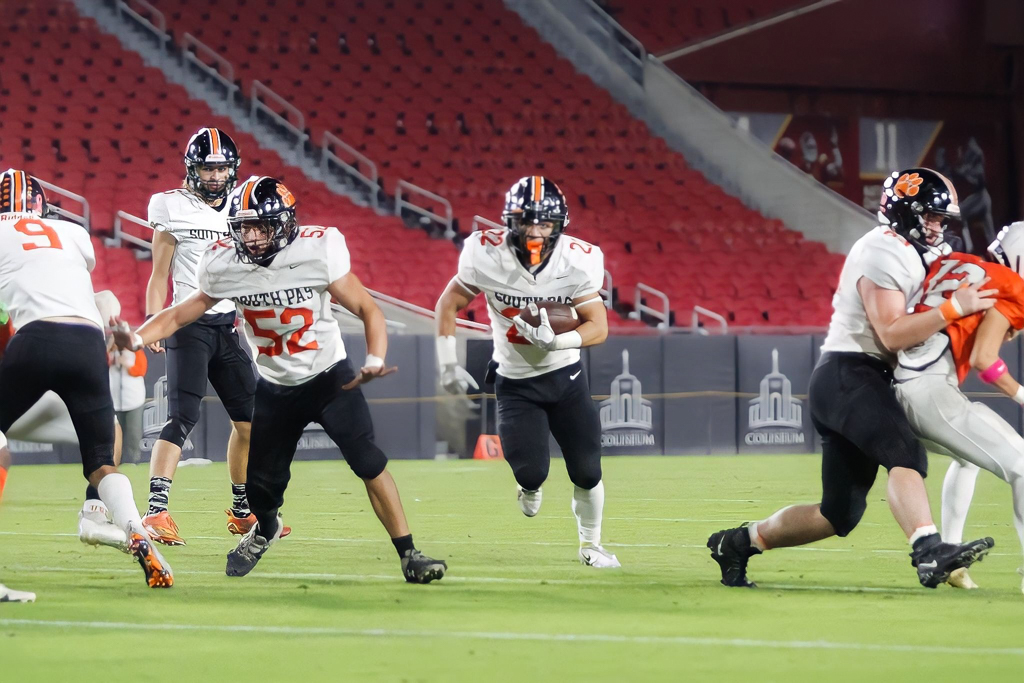 Junior running back Jason Hong (22) found the Coliseum end zone three times to lead the Tigers to a wire-to-wire victory over the Panthers.

Football defeated the Pasadena Poly Panthers 27-7 at the Los Angeles Coliseum on Thursday, Oct. 20. South Pas played as visitors at the historic venue, competing on the same grass and in the same 100,000-seat stadium that the USC Trojans will play in on Saturday, Oct. 22. The Tigers leaned on junior running back Jason Hong to power the offense at the Coliseum while securing a CIF victory. The Tigers currently stand at 8-1, having won three of four league games. The only blemish on the season was a loss against Monrovia.

South Pas ran out of the Coliseum tunnel and began the game in possession. Hong got the first carry. On the next play, senior quarterback Jackson Freking was intercepted on an underthrown pass. Poly took over and immediately showed South Pas their offensive identity. The Panthers quarterback was the main factor in Poly’s rushes game, escaping the pocket and scrambling to extend plays. After a pair of first down runs, senior safety Aidan Kinney lit up the quarterback. Poly’s drive was stunted by a penalty and the offense punted a play later.

Hong picked up a first down to begin the Tiger drive, and junior running back Giovanni Cruz added yards on the ground. On third down, Freking looked to his top target, senior wide receiver Richard Conti, down the sideline. Conti caught four touchdowns in last week’s victory over La Cañada, but this pass was broken up and fell incomplete. South Pas punted.

Poly was overwhelmed by the South Pas defense on the next drive. After an incomplete pass, junior cornerback Luke Riffle and sophomore defensive end James Dowd combined for a sack. On a desperate third down attempt, Poly’s quarterback tried to run for a first down. Senior linebacker Quinn Sterling tackled the quarterback and shut down the drive.

The scoreless first quarter chugged along as South Pas regained possession. Riffle, playing running back, bounced off tackles for a solid gain. Sterling hauled in a high pass and ran for a first down. Next, Hong found a lane to run and cut inside to pick up yards. After a catch by Conti over the middle moved the chains once more, three consecutive passes were incomplete and the Tigers turned the ball over on downs.

The second quarter began with another punt. Both teams struggled to find any sense of an offensive rhythm and Kinney’s tackle spearheaded another suffocating defensive effort. South Pas was determined to score when they got the ball back. Hong slipped a tackle and blazed down the sideline, and followed up that run with by plowing past defenders into the red zone. Riding the running game, Cruz pushed ahead and Hong capped off the drive with a touchdown run. The Tigers led 7-0 after Kinney nailed the extra point.

Poly returned Kinney’s line-drive punt to the 30 yard line. The Panther quarterback heaved a pass to a wide receiver and it looked as though the Panthers had a first down catch. Riffle had other ideas, sprinting to the spot and overwhelming the wide receiver with a vicious tackle. The ball sprung loose and the pass was ruled incomplete leading to a punt by Poly.

Still soaking in the scene at the Coliseum, South Pas looked to add to their lead. Conti weaved through defenders to return the ball to midfield, and Sterling leapt to receive Freking’s pass. After Cruz moved the chains with a first down run, Hong dodged tackles and found room to run down the sideline. Hong dove to the pylon for his second touchdown of the game, extending the Tigers’ lead to 14-0 late in the second quarter.

Poly’s desperate plea to get on the board failed with minutes remaining in the first half. The Panthers couldn’t connect on a deep ball, and senior safety Jason Yipp intercepted a pass. Riffle’s run wound out the first half, with South Pas leading the Coliseum game 14-0.

After halftime, Poly started the second half with the ball and began a mammoth, eight minute drive. Senior linebacker Matthew Takasugi batted down a pass. Poly’s quarterback was able to find a hole in the Tiger’s defense and picked up a first down on the ground, and was shoved out of bounds by a South Pas player. This led to a brief scuffle on the Poly sideline. When action resumed, the Panther quarterback continued to make plays with his legs, refusing to be brought down on a 20-yard run. Poly tried their hand at a trick play, but the South Pas defense wasn’t fooled. A Poly catch-and-run then took the offense all the way into the end zone for a touchdown, but flags flew and the points were taken off the board. On the fourth down from the ten yard line, senior defensive tackle Isaiah Cooper tackled the quarterback and forced a Poly turnover.

The Panthers offense squandered a scoring opportunity, and the Tigers defense bent but refused to break and kept Poly off the scoreboard. Conti made a spectacular diving catch on the Tigers next drive, coming back to the ball near the South Pas sideline. After a pass was juggled and dropped, the Tigers punted.

Poly punted the ball right back. Looking to put the game out of reach, the Tiger’s return man, Conti, got to work. Conti received the spiraling kick and sprinted past defenders. Picking up a block on the outside, Conti was gone, walking into the end zone untouched for an electrifying touchdown. The South Pas faithful that were in attendance for the Coliseum game celebrated the score.

Poly was prepared with a response, lessening the deficit with a touchdown of their own. It only took one play for the Panthers to score a touchdown, with a quick strike to a wide receiver who slipped behind the secondary and ran all the way to the end zone. The score was 21-7 late in the third quarter.

A pass deflected off Dowd’s fingertips and fell incomplete on the Tigers next drive. South Pas punted. Back on offense, Poly turned entirely to their quarterback to run for yards. This strategy led to a pair of first downs, but Sterling’s strong tackle put the Panthers in a fourth down and goal situation. Junior defensive end Thomas Carter stepped up to seal the victory, sacking the quarterback to force a turnover.

South Pas primarily ran the ball on their next drive to keep the clock rolling, and Freking engineered the effort with a 20-yard run down the sideline. With minutes left in the game, Hong completed his hat-trick of touchdowns by getting into the end zone. The Tigers took a 27-7 lead, a score that would hold with zeroes on the clock.

South Pas emerged victorious over Poly to win the Coliseum game. The team has one game left on the regular season schedule, taking on rival San Marino on the road next Friday, Oct. 28.