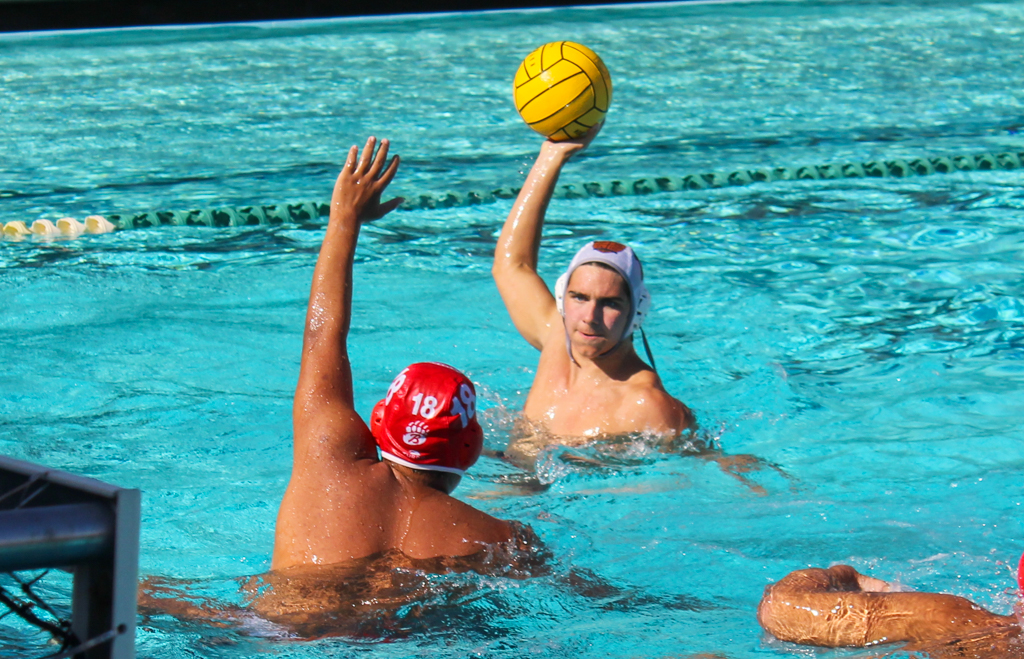 Despite junior Rowan Smith (pictured) scoring a goal, South Pas was on the wrong end of a 14-3 game at home.

Boys’ water polo stumbled in a 14-3 loss against John Burroughs High School on Thursday, Sept. 15. The Tigers kept their defense up but failed to steal a victory from the Bears.

The team started with several attempted shots from junior Rowan Smith and sophomore Jackson Wingard, none of which could penetrate the Bears’ defense. Smith made an illegal effort to block an attempted shot from the Bears, which resulted in a five-meter call and  scored Burroughs their first goal of the game. As the Bears fumbled with the ball, senior captain Zack Quezada swooped in and threw it back to the goalie, sophomore Caleb Dephouse. A final goal from Burroughs closed out the first quarter with South Pas trailing at 3-0.

Burroughs began the second quarter with their fourth goal of the game, maneuvering around Dephouse’s blocks. After a brief time-out called by South Pas, the Tigers rose up with an explosive goal with a tactful attack by Smith gaining them their first goal. The Tigers entered halftime trailing with a score of 4-1.

Even as they tried to step up their offense in the third quarter, South Pas only managed to score one goal. With a game of cat and mouse, the Bears dropped the ball which led to a series of solid passes from the Tigers, and freshman Diego Pizarro scored a goal. Burroughs retaliated with a vigorous offense and scored seven more points, finishing out the period with a nine-point lead over South Pas.

In the fourth period, sophomore Kenta Fernandes scored South Pas’s final goal of the game after a failed block by the Burroughs goalie. The Bears scored two additional points in the final quarter and ended the game with a 14-3 win.

“I think the team played defense really well in the beginning…[at the start] we had some really good [plays], especially defensively.” Quezada said. “It was generally okay and by the end of the season, we should have a handle on unique [skills] but we just got to work on scoring goals right now.”

The Tigers will face the Golden Knights of St. Francis at home next week on Tuesday, Sept. 20.

Letters of recommendation: The Hunger Games of college admissions