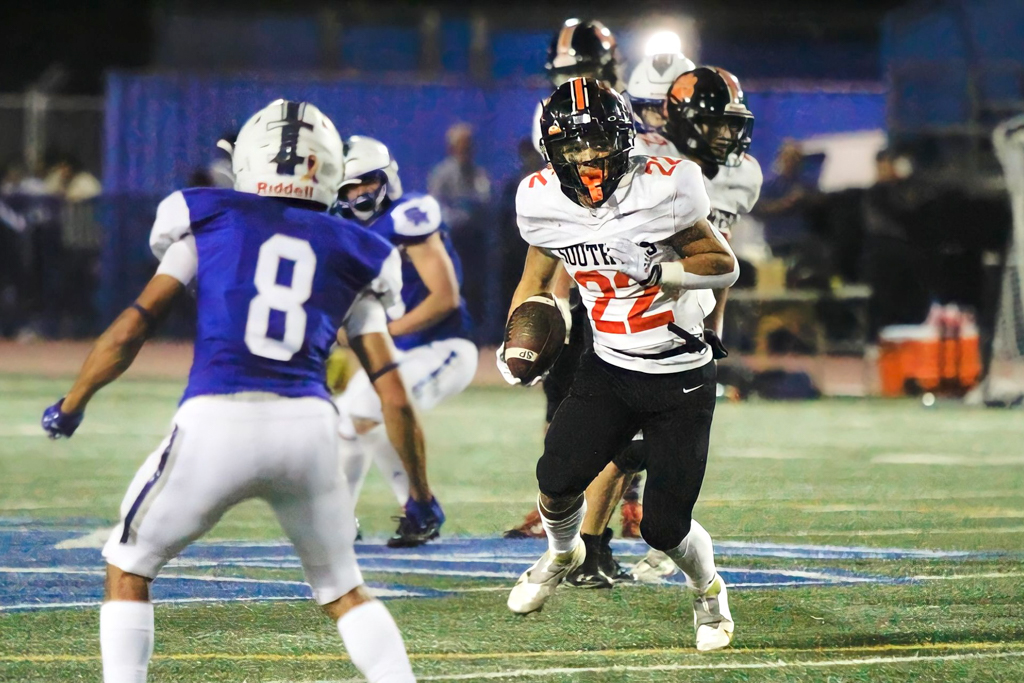 Junior running back Jason Hong (22) ran for over 100 yards, but it wasn't enough to overcome the San Marino Titans.

Football fell short against the San Marino Titans 23-21 in the final game of the regular season on Friday, Oct. 28. The Titans scored a game-winning field goal as time expired to knock off the Tigers in the annual rivalry game. This year, the stakes were even higher, as CIF berths were at stake. Despite the loss, South Pasadena has secured third place in the Rio Hondo League and will advance to CIF.

Senior quarterback Jackson Freking completed 8 of 16 passes for 143 and a touchdown, while rushing for two more. Heading the offense, junior running back Jason Hong had 20 touches to accumulate 120 yards on the ground.

Senior linebacker Matthew Takasugi led the defense with ten tackles. Sterling contributed 13 tackles of his own, while juniors Giovanni Cruz and Harrison Farley each recorded five.

The Tigers rounded out their year with a dispiriting loss to the Titans, but still notched a successful season under head coach Jeff Chi. South Pas finished the season with an overall record of 8-2, going 3-2 in the league play. The Tigers’ suffocating defense pitched three shutouts this season, and the offense averaged over 31 points per game, including two 50-point performances. South Pas looks to carry its aggressive brand of football into CIF.

CIF schedules will be announced on Sunday, Oct. 30.