Fake news: an issue on both sides 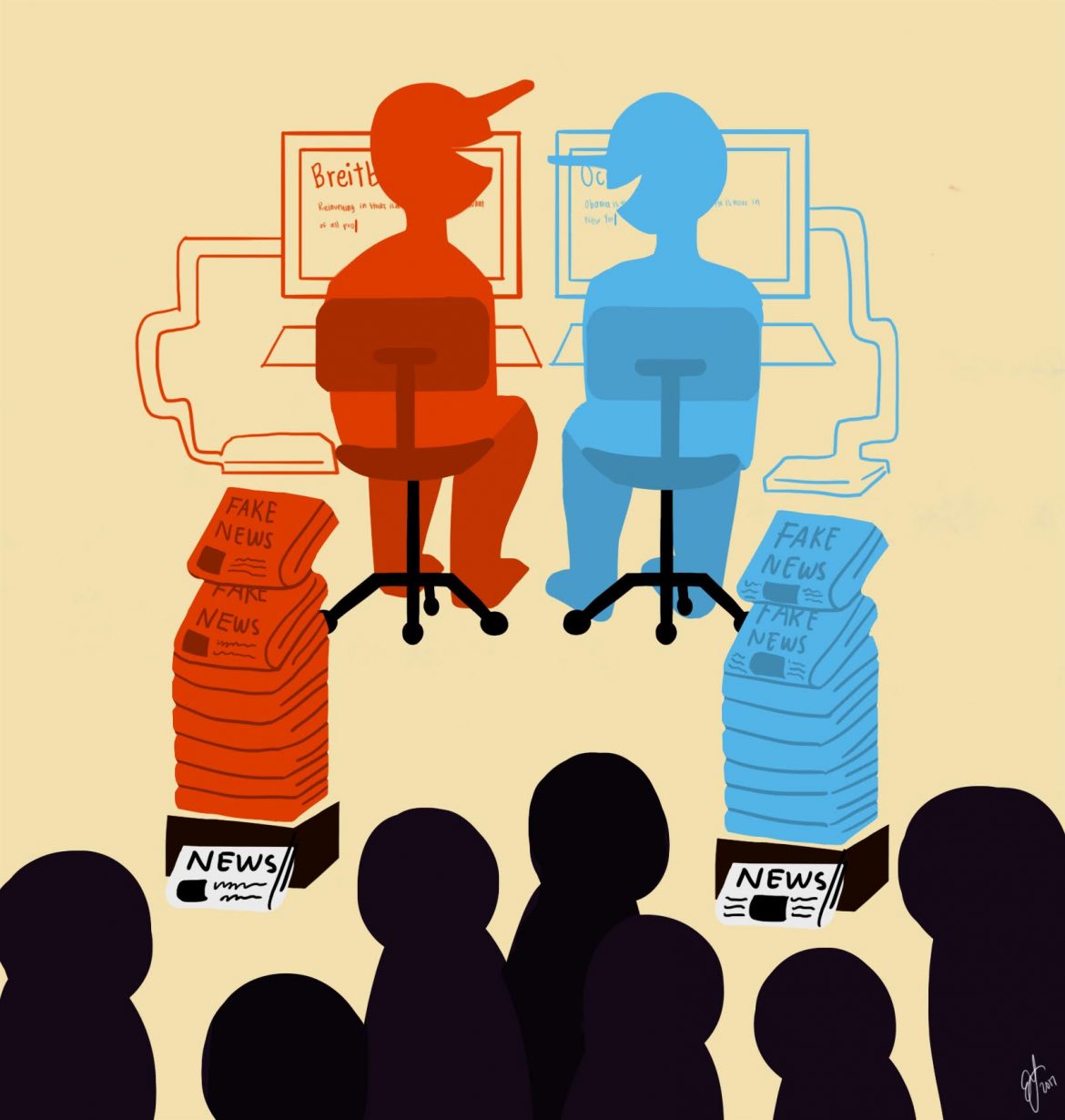 It is crucial that readers gauge the extent of bias in the news they read, and shape their views with accurate information.

The heated political climate of today has lead to widespread distrust of media, including the now-familiar accusation of “fake news”. While fake news is generally associated with fully fabricated stories that are intended to deceive, readers may encounter partially fabricated stories, altered facts, omission of reporting, and misleading language more frequently. The degree of bias can be measured using the frequency and severity of deceptive methods. Some articles are more biased than others, and the lines between accurate reporting, slanted coverage and “fake news” is thin. It is up to readers to look deeper into their news sources to spot evidence of heavy bias, in addition to getting their news from fair and unbiased sources. The public’s responsibility is to not fall to the allure of clickbait and content exploiting confirmation bias, and instead seek out journalism that is truthful, deep, and thought-provoking.

Publications that display extreme bias thrive due to confirmation bias, which is the tendency to interpret information as a confirmation of existing beliefs. If the narrative presented by a publication fits with the reader’s own views, it is more likely to be perceived as truthful, regardless of whether the article is true. Since readers are naturally inclined choose news sources whose commentary matches their own views, they may not realize that their favorite Facebook page or website is regurgitating manufactured articles that serve as propaganda.

Occupy Democrats is a prime example of a news page with extreme liberal bias. According to Media Bias/Fact Check, Occupy Democrats is considered a “questionable source”, and is also on Politifact’s “Fake News List”. Its stories are cherry picked to fit its extreme-left agenda, and can often be considered overt propaganda or even fake news.

A recent article by Occupy Democrats stated that Mitch McConnell, who opposes Medicare, was saved from polio as a child by a government-funded treatment center in Alabama. However, Snopes has discredited this claim by showing that McConnell’s treatment was funded by a private non-profit, not a federal or state agency; thus deeming the article as fake news. Since Occupy Democrats has been shown to publish fake news, it has violated journalistic integrity and cannot be relied on to provide accurate reporting.

The propaganda aspect of Occupy Democrats can be seen in its use of memes. One meme features the caption, “Share if you’re outraged that four Floridians were just infected with the Zika virus after the Republicans [sic] Congress voted down a bill to provide funding for Zika prevention.” The meme encourages the viewer to actively promote and spread the organization’s opinion, which is propaganda by definition. Instead of using an article, the publication utilizes simple images that are meant to be processed quickly and without much thought, whose success depends solely on confirmation bias. The viewer is more likely to research the facts behind the memes if it does not fit with their existing views, while they have a tendency to ignore lack of evidence if the meme fits with their views.

The same phenomena can be observed on the opposite end of the political spectrum, by far-right website Breitbart. Its Media Bias/Fact Check profile shows a history of conspiracy, racism, and fake news. Like Occupy Democrats’ attacks on President Trump, Breitbart has disparaged President Obama, such as asking “How did this fatherless black guy pay for Harvard?”. This type of derogatory rhetoric is used by both the left and right to de-legitimize the opposite side, and provides no meaningful addition to a discussion.

These two news outlets display the existence of extremely biased reporting across the political spectrum. Inherent confirmation bias as well as deliberate attempts to manipulate readers have affected the public’s ability to properly judge an organization’s reliability. Nevertheless, readers still have ample access to online resources that profile news outlets. Credible and unbiased fact-checking websites include Media Bias Fact Check, Snopes, Politifact, and FactCheck.org. Using Media Bias/Fact Check, readers can view the degree of bias of many news sources. Relatively unbiased include Reuters and the Associated Press, although center-left and center-right sources are generally credible.

Changes also must be made to how news organizations approach political news. Instead of resorting to low brow personal attacks and polarizing language, more emphasis should be put on unbiased reporting of facts. Commentary should be limited or nonexistent in reporting, with the majority of commentary being contained within the Op/Ed section. Ultimately, it is up to the public to denounce and reject manipulative journalism, in addition to getting news from sources that consistently display integrity and deep thinking.

Mosaic Church tests the waters, hosting an interest night at the Rialto