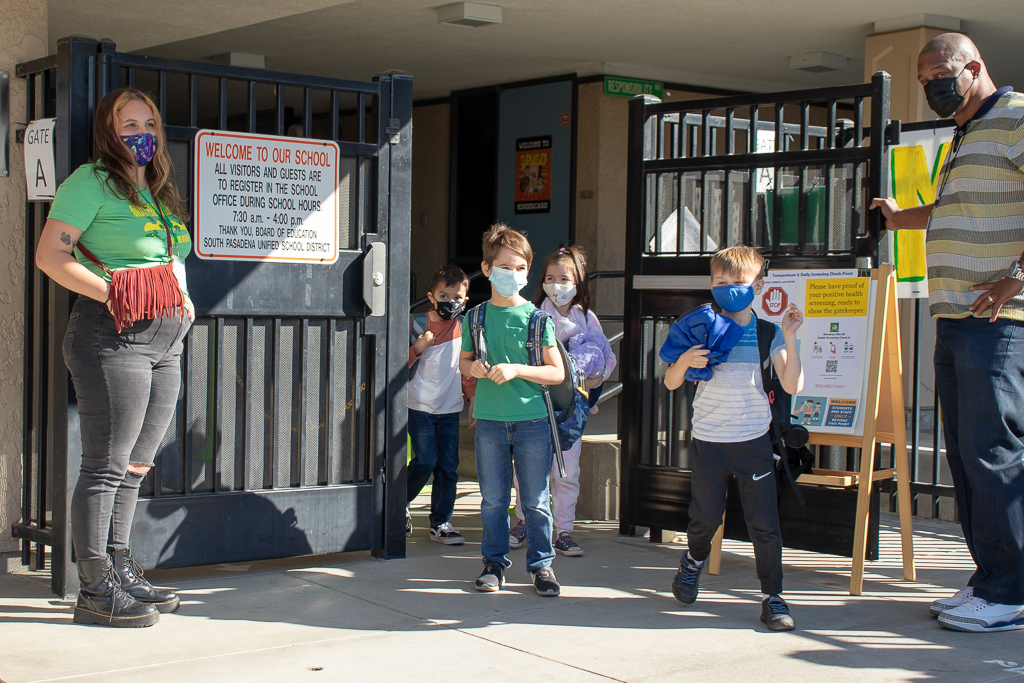 About 240 TK to 2 students returned to elementary school in two groups on Feb. 18, with 12 students in each classroom at a time.

SPUSD TK to 2 students eagerly stepped through their elementary schools’ gates for the first time in nearly a year on Thursday, Feb. 18, and parents, teachers, and administrators rendered the reopening day a success. As per SPUSD’s reopening plan, students arrived in separate AM and PM time slots and followed distancing and mask requirements in their respective 12-person cohorts.

According to Monterey Hills elementary school (MHS) Principal Dr. Laurie Narro, approximately 240 students attended MHS’ reopening in total, and the school was well equipped to handle all of them.

“Our teachers were such problem solvers in the moment… There were about 120 kids coming in at a time and it went beautifully,” Narro said.

Arroyo Vista elementary school first-grade teacher Mary-Ann Arreola expressed her satisfaction with the safety of the reopening process, as her classroom housed hand sanitizer pumps and her students were equipped with spare masks. Moreover, Arreola felt a rush of excitement throughout the first day back, both in seeing her students’ faces in-person and in returning to some sense of normalcy.

“It feels wonderful to be able to teach in-person again because I get to see the students’ reactions face-to-face. Now that we are in the classroom, I will be able to facilitate more hands-on learning activities,” Arreola said. “I received a ton of positive feedback from parents after they had the opportunity to talk with their child about the first day. One father even told me his daughter said it was the best day [ever]!”

The district originally set TK to 2 students to return in January, however new state guidelines forced a postponement. The School Board later approved reopening for Feb. 18 at its meeting on Tuesday, Feb. 9, after L.A. County’s adjusted case rate dropped below 25 per 100,000.

The district had informed families about the specific pick-up and drop-off process via email, which partly reassured MHS first grade parent John Proulx. Still, Proulx worries if the district has made the right decision to reopen.

“My son was excited to recognize his classmates and teacher, and gave me the ‘thumbs up’ when I dropped him off at the gate,” Proulx said. “On the other hand, I still have concerns that [SPUSD] hasn’t made vaccinating teachers and staff the first priority. I understand that the science and CDC recommendations have said that kids in his age group are less likely to catch and spread the virus, but there is still the chance that he could bring the virus home.”

The School Board has approved phases two and three of its reopening plan, which aims for third and fourth grade students to return on Mar. 11 and Mar. 15, respectively.