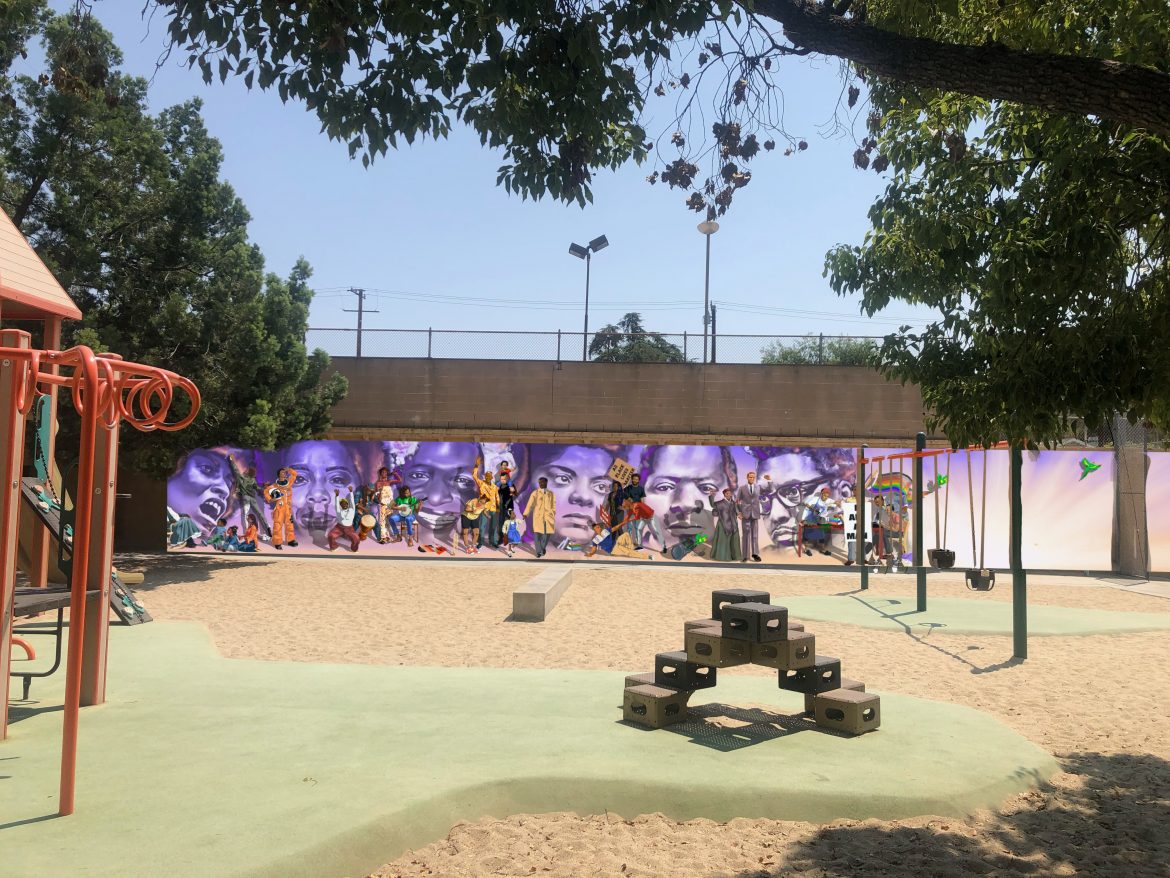 Supporters of the BLM mural point to its anti-racist content and depiction solely of Black people as the likely reason for the City’s introduction of the need for a public art policy on this particular project and not previous ones.

The City Council unanimously voted to delay a decision on the Anti-Bias Club’s Black Lives Matter (BLM) mural until a public art policy is created, at its meeting on Wednesday, March 2. The postponement of the anti-racist artwork, which already received approval from the Public Art and Parks and Recreation Commissions, came after over 40 community members made public comments, written and spoken, urging the Council to greenlight the painting of the BLM mural at Orange Grove Park at the same time it develops new public art policy.

The Anti-Bias Club first presented the concept of a BLM mural to the Public Art Commission in July 2020, at which time an ad hoc committee was formed to guide students. The City Council then gave conditional approval for the project to be painted on the west wall of City Hall in October 2020, pending approval from the Public Arts Commission for the design.

Students selected local artist Zach Brown to paint the mural and they collaborated to create a design, which was presented to the Public Art Commission in March 2021 and again in June 2021, each time receiving support, but not approval, from the commission. Liability issues with the City Hall location brought up by City Attorney Andrew Jared forced the club to pivot to the Orange Grove Park site.

As a result, Brown updated the design to fit new dimensions and the group received approval from the Parks and Recreation and Public Art Commissions in September 2021 for the wall and design, respectively. After being agendized and then postponed for three consecutive City Council meetings in December 2021 and January 2022, the BLM mural was added to the March 2 council meeting as a discussion item.

A week prior to the meeting, creators of the mural met with city staff, when they were notified for the first time that a public art policy needed to be developed before the City could move forward with the BLM mural. The City Council directed city staff to draft a public art policy due to the high volume and complexity of submissions for art installations using the City’s Civic Center Art Gallery funds at its Wednesday, Feb. 16 meeting.

However, residents took issue with the application of the development of the new policy to postpone a decision on the BLM mural, after the project had received all preliminary approvals. Additionally, public commenters pointed out that past public art projects, such as the South Pasadena Arts Council’s (SPARC) painted utility boxes, did not trigger the need for a new city-wide public art policy and were contracted only through artist agreements.

“I have never heard of a city that has stopped production of art or any city operation on the basis of developing organizing policy,” Public Art Commision Chair Phung Huynh said. “All of the public art that has been created in South Pasadena such as the utility boxes, artwork for the K-rails on Mission, and the mural on Orange Grove Park that would neighbor the future BLM mural did not require the passage of a public art policy. The only thing necessary was a contract with the common goal to produce meaningful public art. [Many other cities’ policies] function more like a vision or mission statement, but do not hinder or stop the production of public art.”

Supporters of the BLM mural point to its anti-racist content and depiction solely of Black people as the likely reason for the city’s introduction of the need for a public art policy on this particular project and not previous ones. The design features prominent historical Black figures like Marsha P. Johnson, Ida B. Wells, and Angela Davis, in addition to local BLM protestors London Lang and Fahren James. Sunrays in the mural also cast light on South Pasadena’s history as a sundown town — prohibiting BIPOC from being in the city after dark. The blank space on the right of the design is intended to invite community members to stand in the artwork, signifying that everyone has a role and a responsibility in the anti-racism movement.

James made a public comment in the meeting, in which she critiqued the City’s attitude toward the BLM mural.

“There is a much bigger issue here at play, and it has to do with the city and the disposition of how they feel about Black lives, and the Black Lives Matter movement in general,” James said.

She then followed up with a clip from the Nov. 4, 2020 City Council meeting, in which a City Council member reported on hearing SPPD opposition to the BLM mural.

“On October 26, Mayor Pro Tem Mahmud and I attended a meeting with some of the police officers,” former City Council member Richard Schneider said during Council member communications. “They had some complaints. Their main complaint was that the City Council had allowed the Anti-Bias Club of the high school to have a Black Lives Matter mural on City property, on the City Hall wall. They were very concerned that this was a Black Lives Matter type of mural, and they consider the Black Lives Matter [movement] an anti-police organization. They made several comments about how they heard many comments from the Black Lives Matter demonstrators that were rude and insulting to police. So we listened to their complaints and discussed it later. They have asked us to reconsider the placement of that mural on City Hall.”

Brown, the mural’s artist, reiterated James’s concerns about the underlying motivations of the City’s actions.

“Every road block that has been put in the way of this mural is a part of this mural’s history,” Brown said. “And when it’s done, that history will be told. If you have kids, and you have grandkids, what will you say to them when they look at that mural? When they ask you what part you had in having this mural be created, what will you say? I’m so grateful to Fahren [James] for also playing that recording from the beginning of this process. In all of the bureaucracy and red tape that has surrounded this project, it has felt very much as though there is potentially some opposition to this mural.”

The City Council did not directly respond to any of the issues raised in public comment, following protocol, and instead focused on the legal issues that could result with the painting of the mural. Jared, the City Attorney, expressed concerns regarding the City’s standards for public art, explaining that a mural on public property could be considered government endorsement of private speech.

“Because we don’t have a policy, it puts the city at greater risk of having to open up more space,” Jared said. “This particular mural has gone to several committees because it’s the logical thing to do. Opening this door could mean some unintended consequences.”

Members of the Anti-Bias Club criticized the Council’s decision, expressing frustration that the development of a new public art policy would unnecessarily delay the mural’s approval.

“We were informed for the first time at this meeting [on Tuesday, Feb. 22] that a new city-wide public art policy [must] be implemented,” Anti-Bias Club President and senior Lulu Talesnick Lopez said. “There should be no reason this project, which we have been working on for over [one and a half] years, is stalled any longer. It is a piece of art that will serve our community for generations to come.”

Other commenters focused on the City Council’s lack of follow-through after it passed a Sundown Town Resolution committing to anti-racist action at its Wednesday, Feb. 2 meeting.

“For many years, the City has used a consistent, fair, and equitable process for reviewing proposed public arts projects, involving the Public Art Commission and City Council,” community member Rich Elbaum said. “In this particular case, there was extensive public review and conditional approval, but for some reason, the City Council has chosen this mural, a tribute to the strength of the Black community, as the one that calls into question the City’s long-standing process for public art[….] Just last month, the Council approved a resolution acknowledging the City’s racist past, and committing to do better on diversity, equity, and inclusion. If [the City Council] truly stand[s] for equity, why would [it] treat this mural differently than all of the previous ones?”

Community members also characterized the way public commenters were handled at the meeting as unfair. The City Council restricted public comments to two minutes for the BLM mural agenda item, and community members wishing to comment had to raise their hand at the beginning of the item to be included in the queue.

“While it is legal to cut down comments from three minutes to two minutes, I do not think it is fair because people should have the right to express their feelings,” Talesnick Lopez said. “People should have the right to express their opinions: that is the point of public comment. As well as [the fact that the] City Council [is] in part there to listen to the people, especially the people [it] represent[s]. [When] we got more support and public comments, that is when public comment got cut down, so it is in a way like they are trying to silence our voices.”

City staff did not let the students working on the BLM mural present their own project, which inhibited them from answering Council members’ questions during the meeting, until emails from students to Council members earned them a short window of time to provide clarity.

“Mayor Cacciotti’s attitude towards the public commenters has been hostile and not welcoming at all,” Anti-Bias Club Vice President and junior Alexa Morales said. “All the council members claim to appreciate our enthusiasm, but their actions don’t reflect their words and I think that’s common throughout their different claims — especially their anti-racism claims. They obviously don’t really care because their actions don’t reflect their words. I feel very frustrated [towards] and unheard [by] these people in power [….] It was brutal hearing them ask questions and say things we had an answer for [when] they just weren’t letting us speak.”

The Anti-Bias Club is exploring walls on private property in South Pasadena for the BLM mural to be painted on while the City develops a public art policy. Club members have requested that anyone with leads on locations contact them via email. The City Council meets next on Wednesday, March 16.