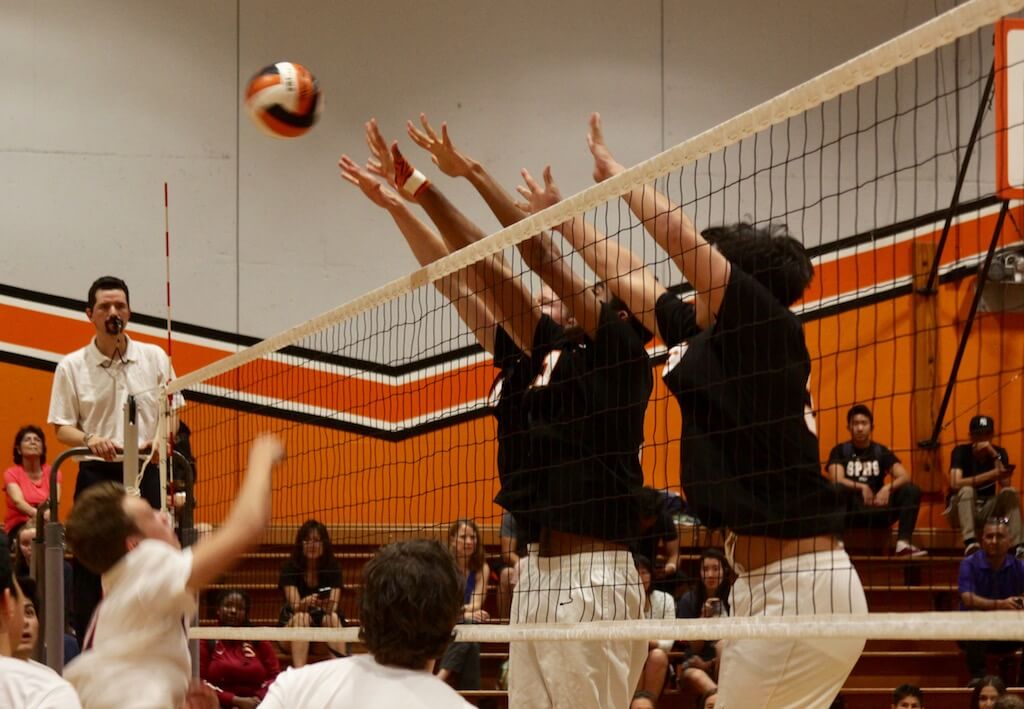 The boys’ varsity volleyball team continued its blooming undefeated season with a decisive victory over Gabrielino High at home on Wednesday, March 28. The Tigers easily won 3-1 but struggled with careless errors, especially in the third set.

Seniors Lucas Fox and Gunther Vaden showed the team’s defensive strength in the first set. In the middle of the set, a crucial block from Fox and Vaden led the team to solidify its 8-6 lead. Junior Kyle Woo soon contributed to the Tigers’ lead with an impressive kill. The Eagles then proceeded to fault with a net touch. Senior Matt Scholtz led the set in kills, while junior Cole Schroeder helped assist both Vaden and Scholtz. Gabrielino continued to make blunders with two net touches and a side-out.  The Tigers decisively won 25-17.

Vaden continued SPHS’ domination into the second set with an ace. However, Gabrielino was able to get a point from a free ball. Junior Kanak Belgaum soon responded with a kill. An unforced error soon tied the set 3-3 and Scholtz widened the lead with a kill. The Eagle’s unlucky match continued with a setting error. Scholtz continued to showcase South Pas’ dominance with a kill. The defense trio, Sholtz. Fox, and Schroeder, successfully blocked a Gabrielino which increased the Tigers’ lead to 16-11. After Gabrielo called a timeout, Woo had two kills. The set, final score 25-17, made the Tigers overconfident in the third set.

The third set was marked persistent defensive errors. Despite the Tigers’ chronic mistakes, the team persevered to earn 21 points with Scholtz, Woo, and Vaden leading the team in kills. Gabrielino managed to sneak past the Tigers with a victory of 25-21.

“We lost the third set because we were too relaxed. Because our team was significantly better than them [Gabrielino], we were overly confident,” Belgaum said.

SPHS, shaken up from the third set loss, quickly recovered. Vaden started the set with a kill, and  Scholtz contributed another that widened the lead even more. Fox and Vaden defended the Tigers’ domination with a block. Belgaum’s fourth kill of the game made victory for the team inevitable. The final score of the fourth set was 25-14.

The Tigers’ next match is home against San Marino on Tuesday, April 11.