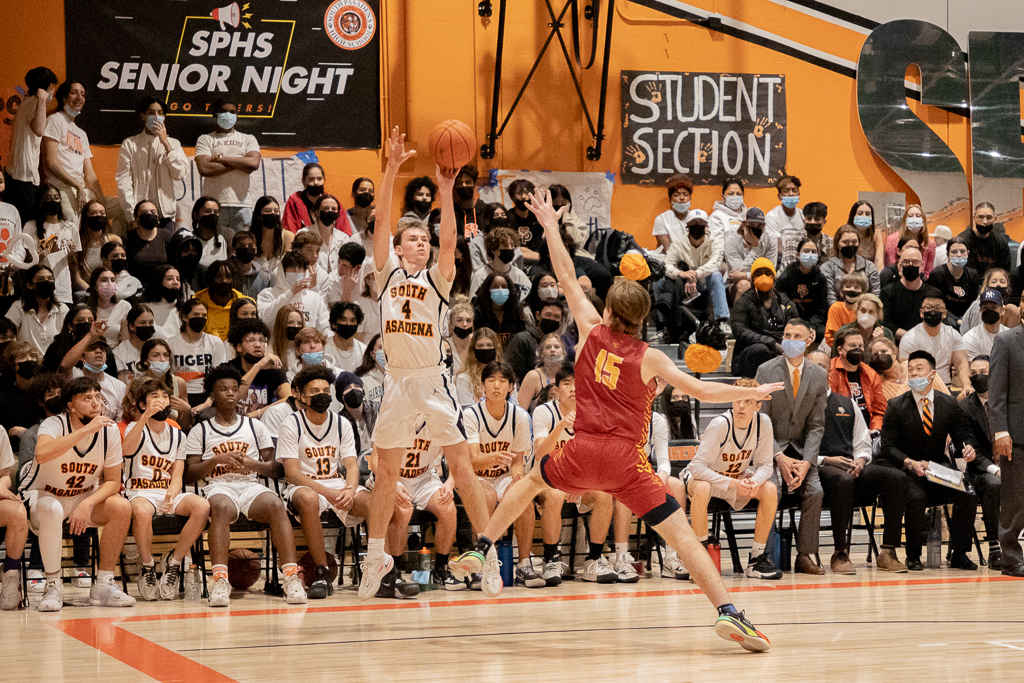 Senior Jonny Guy (4) stretched over a La Cañada guard to bring the Tigers to a 65-62 win.

Senior night and a critical league game for the South Pasadena Boys Basketball team converged for a loud gym, energized crowd, and electric play from the fourth-year stars of the program. In a game with significant CIF and league implications, opposing rival La Cañada needed the win, but the Tigers bested the Spartans 65-62. On the backs of seniors Niko Lawrence, Dillon Akers, Jonathan Guy, Sage Wayans, and Ezekiel Pannell, the Tigers used a dynamic offense and relentless defense to move into first place in the Rio Hondo League with two games left to play. With only Temple City and San Marino left on the schedule, basketball stands at 7-1 in league play and 16-7 overall.

Before the opening tip-off, the lights were dimmed and music was played as the starting lineup, all seniors were announced. The packed gym saw unwavering support from Tigers’ faithful.

South Pasadena took control of the opening tip and Akers immediately greeted La Cañada with a three-pointer. When the Tigers got the ball back, Guy connected with Akers who found Wayans alone under the basket, and he converted the two-pointer. Guy went on to score a high-arcing shot, and Wayans made a layup in transition all before the Spartans scored a point. Lawrence skipped to the bench in excitement after a La Cañada timeout, as South Pasadena roared to a 9-0 start.

La Cañada finally got on the board with a free throw before Guy extended South Pas’ lead with a three-pointer. While the Spartans struggled navigating the Tigers defense — finding an open man and executing passes in tight windows, the Tigers moved well without the ball and seemed to find the bottom of the net every time. 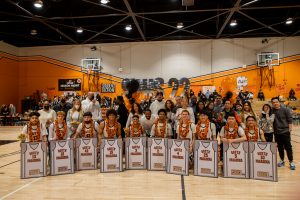 The Spartans would crawl back into the game, driving to the basket on one possession to score a two-pointer, then converting a corner three-pointer on the next. Pannell scored his first points of the evening on a midrange two-pointer, but La Cañada had found a way to balance out the score, trailing only 17-11 after a quarter.

La Cañada’s center then decided to quiet the crowd and lessen the deficit, stepping into consecutive three-pointers without hesitation and knocking both of them down to tie the game. The Tigers played strong defense; contesting each shot and pressuring each pass (even in the frontcourt), but couldn’t account for the Spartans’ big man.

Pannell then swung the lead back in the Tigers’ favor, scoring a three-pointer. After La Cañada misfired on their next shot attempt, Akers ripped down the rebound, sprinted to halfcourt and passed the ball perfectly between two defenders into the hands of his teammate. The 6 foot 7 Wayans did the rest, soaring to the basket and dunking. The electric basket brought the crowd to its feet.

A Guy three-pointer and Akers’ baseline floater extended the Tigers’ lead to 27-21. Akers’ once again showed a soft touch and strong ball control on the next offensive possession, adjusting midair to score a reverse layup. The Tigers continued a strong defensive effort – deflecting passes and securing rebounds, while their efficient offense found ways to score from every area of the hardwood. Furthermore, Wayans’ strong presence in the paint drew multiple defenders, often leaving a man unguarded beyond the arc.

With minutes left in the first half, the pace slowed and each team turned to the free throw line as their main source of points. Wayans made three of four shots and Akers drained a free throw of his own. An eventful first two quarters concluded with South Pas ahead 36-27. 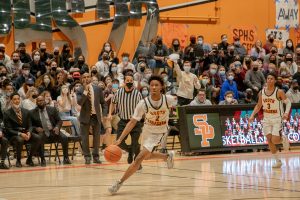 La Cañada went on a strong run to begin the second half, scoring eight unanswered points to bring the game within a point, 36-35. Wayans countered with a three-pointer, but the Spartans got to the free throw line and made both shots to stay on the Tigers’ heels. As La Cañada was beginning to take the momentum, a critical error, fouling Akers as he attempted a three-pointer, stunted it. Akers’ would knock down all three shots.

Akers then stole the ball to start the final frame and found Wayans, who pulled up and scored a midrange two-pointer. A deflected pass led to a South Pas steal; the defensive intensity remaining high, and Akers finished the possession with a layup. Wayans would score two consecutive buckets, propelling the Tigers as they began to pull ahead.

Next, with the score standing at 58-53, a slim South Pas advantage, freshman Sebastian Martinez drove to the basket, pump-faked, and somehow swung the ball to the corner where Guy stood ready to shoot. And shoot he did. With three minutes left, the Tigers lead had become six.

After La Cañada made both free throws, Wayans took off across the court. With polished footwork, Wayans easily blew past his defender and scored off the backboard. The Tigers’ led 63-57 with half a minute to play.

La Cañada heaved the ball to the basket in desperation and somehow the shot fell through the hoop. South Pas inbounded and were immediately fouled by a La Cañada defender. Pannell needed to make only one free throw to end the game, which he did. With the game out of reach, the Spartans added a two-pointer, but it was too little too late. The score was 65-62 South Pasadena when the final buzzer sounded and Akers pointed to the crowd in celebration. The Tigers are now alone atop the Rio Hondo League standings.

On Wednesday, February 2nd at 7:00 P.M., the Tigers will face off against Temple City on the road in another pressing league game.

Good Luck tonight TIGERS Dillon, Sage, Niko and all the rest. We are waiting for the WIN tonight. We support you guys to the end!! GO TIGERS. Let’s knock Temple out!!!