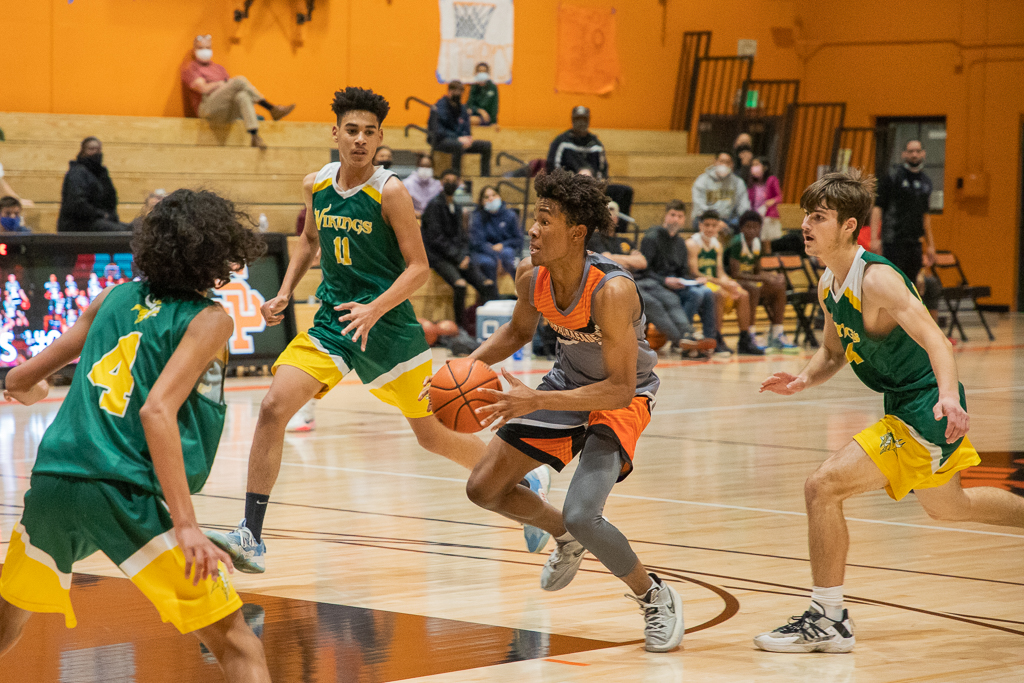 The Tigers still stand first in the Rio Hondo league and are primed for a CIF run.

Boys Basketball crushed the Blair Vikings 70-48 in an exciting league game on Friday, Jan. 28. The Tigers started their second-string players against an opponent they dominated previously this season, before giving their starters playing time.

Eager to get playing time, the second-string seniors started strong, winning the tipoff, and a senior guard Jaeqon Santos two-pointer. But the Vikings matched the playing style and speed, frequently intercepting passes and taking possession. Four minutes into the game, the Tigers had scored two points to the Vikings’ seven.

With this early deficit, South Pas rotated back in their first-string players and began to pick up speed. Blair’s baskets consistently hit the rim and South Pas was back to their normal scoring habits. Junior Nick Chabot scored a three-pointer followed by a senior Niko Lawrence two-pointer, tying the score seven apiece.

The Tigers continued to make headway, with seniors Sage Wayans and Dillon Akers landing a three-pointer and two-pointer, respectively. The Vikings tried to trick the Tigers with fancy footwork but Wayans broke away and scored on a dunk. Akers was the hot hand, landing another three-point shot for the Tigers.

By the end of the first quarter, Blair had only managed to land another two-point shot, bringing the score to 17-9.

The second quarter rolled in and the first string of players were now fully acclimated to their new teammates. South Pas towered over Blair with the seniors using their immense height to their advantage, not letting Blair develop plays. Although senior Jonathan Guy missed his foul shots, Wayans rebounded the ball, sprinted out beyond the arc, and converted a  three-pointer, so it didn’t sting too bad.

Wayans continued landing shots, scoring both of his fouls and an additional two-pointer. Additionally, junior Finny Ho garnered a two-pointer and made a defensive impact by intercepting Blair passes. Lawrence and Ho scored lay-ups, and landed two and three-point shots. The score slid to 35 points for South Pas. Blair was able to gain two-pointers off of South Pas missteps, eventually gaining 15 points. South Pas pulled ahead with a substantial, 20-point advantage.

By the end of the first half, the Tigers rode a 20-point lead, one they would maintain throughout the rest of the game. But given that the Tigers had previously beat the Vikings by upwards of 40 points, a 20 point lead was not satisfying for them.

The third quarter was relatively uneventful compared to the first half. Ten seconds into the eight-minute runtime, the Tigers called a timeout. Upon their return, Lawrence nabbed a two-point basket. Blair scored a three-pointer in response. Blair later committed a technical foul and Wayans capitalized off of it, completing one of his shots. Akers dominated the third quarter, landing shot after shot and levying the Tiger score to 45 points. 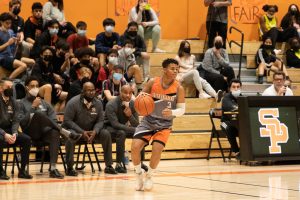 Already down double digits, Blair turned to another strategy: hoping that by shooting a large quantity of shots, some would land. Lawrence dribbled to half-court but Blair intercepted his pass and scored a two-pointer. Akers bagged a three-pointer and Lawrence completed his foul shots. The third quarter clock ran down with the Tigers at 51 points and Blair at 33.

The fourth quarter began with a comfortable South Pas lead. Wayans and Ho racked up three total points for two technical fouls. Guy converted a layup and swished a two-point shot. Similar to the Guy foul moments earlier, freshman Sebastian Martinez failed to make his foul shots, but Lawrence picked up the slack and nabbed a two-pointer.

As Guy made his foul shot and two-pointer, a new batch of Tigers began lining up on the side of the court, ready to be put in. A few underclassmen had already seeped in earlier, but the mass entrance of underclassmen talent brought newfound excitement to the game.

Freshman Miles Nowe sank all three of his foul shots, single-handedly scoring five points for the Tigers and bringing the tally to 69 points. The sophomores Nathan Kawasaki and Isaiah Hyun passed between each other, but ultimately Blair was able to regain control of the ball.

The Tigers remained with 69-points for the majority of quarter four, until freshman Oni Balogun swooped in and brought the total to 70. Inching towards the final seconds, Kawasaki waited the game out and let the clock run down. Blair had garnered 48 points by the final buzzer.

“We need to start off the jump, playing how we should be playing and not messing around with teams. It’s hard to get back into the game when you give teams confidence,” Lawrence said. “[We hope to make] a deep run in the playoffs and maybe get a ring this year.”

The Tigers will face off against the La Cañada Spartans in a league home game on Monday, Jan. 31. With three games left to play, the Tigers stand at 15-7 overall and 6-1 in league competition, putting them atop the Rio Hondo League standings and in a prime position to make CIF.