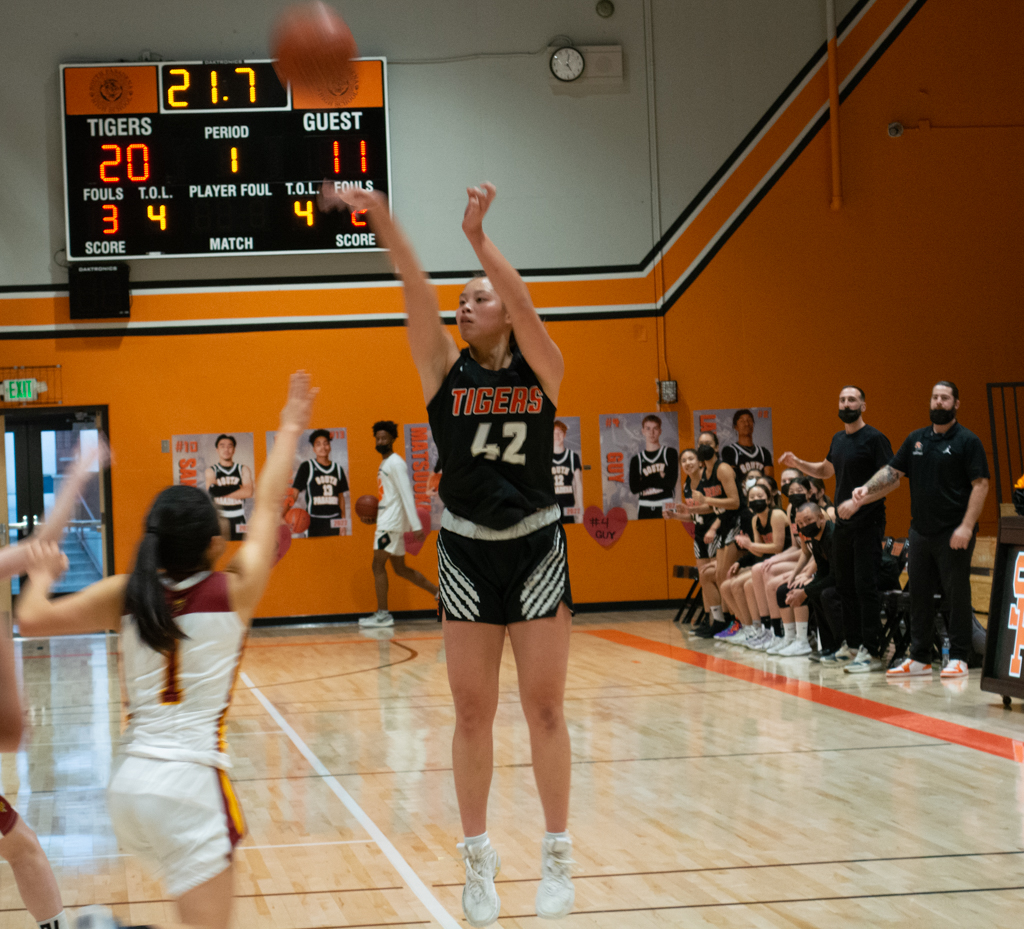 Senior Allysan Tse (42) is one of the four seniors celebrated in the after-game ceremony.

Girls basketball cruised to another league win, defeating the La Cañada Spartans 69-47 on Monday, Jan 31. The spectacular win raised the Tigers’ overall record to 22-1 and an 8-0 league record, keeping them in first place in the league.

From the tipoff, the Tigers and Spartans battled for the ball in multiple skirmishes. After several rounds across the court, sophomore point guard Dylan Tse swiped the ball from La Cañada before racing down the court and making a 2-pointer. Despite the Spartans’ respectable defense, the Tigers utilized a flurry of passes to draw them away from players with an advantageous shot. After a contentious battle in the last minute, D. Tse succeeded in breaking away and sinking a 3-pointer right before the buzzer, ending the quarter 23-11, and establishing a solid lead for the Tigers.

South Pasadena continued to bolster their defense in the second quarter, forcing La Cañada into bad shots and contesting their passing relentlessly. The back-and-forth play intensified, but an impressive 3-pointer nearly half a court away by senior power forward Allysan Tse followed by a 3-pointer from the corner by Dylan Tse helped the Tigers’ breakaway. South Pasadena ran down the clock in the last 30 seconds, preventing La Cañada from scoring and ending the first half with a 33-21 lead.

The Tigers swiped the ball at every opportunity and went after La Cañada’s defense in the third quarter, making it impossible for the Spartans to close the gap. Junior small forward Lotis Shoun took the ball down the court, raced ahead of Spartan defenders, and sank a 2-pointer, leaving them in the dust. The Spartans’ attempts to score were thwarted in the last minute of the game, as nearly every shot they attempted was blocked by the Tigers. The third quarter ended with a score of 45-34.

The Tigers squashed any hope for the Spartans to take the lead in the fourth quarter, scoring nearly 20 points by sinking shot after shot. The Tigers managed multiple impressive plays, as senior small forward Alyssa Chan, Allysan, and Dylan landed difficult 3-pointers from the corners. The Spartans were within range of a comeback but were soon overpowered by the Tigers. South Pasadena ended the game with a 69-47 victory.

After the game concluded, the graduating seniors were congratulated in a small ceremony honoring the hard work and dedication of center  Christina Salguero, point guard Isabella Alfonso, Allysan Tse, and Alyssa Chan. They offered words of wisdom for future players, as the underclassmen also shared emotional messages for their teammates, and thanked them for all they have done for the team.

There are two league games before the Tigers proceed to CIF. South Pasadena will next face San Marino in an away game on Friday, February 4 at 5:15 pm.