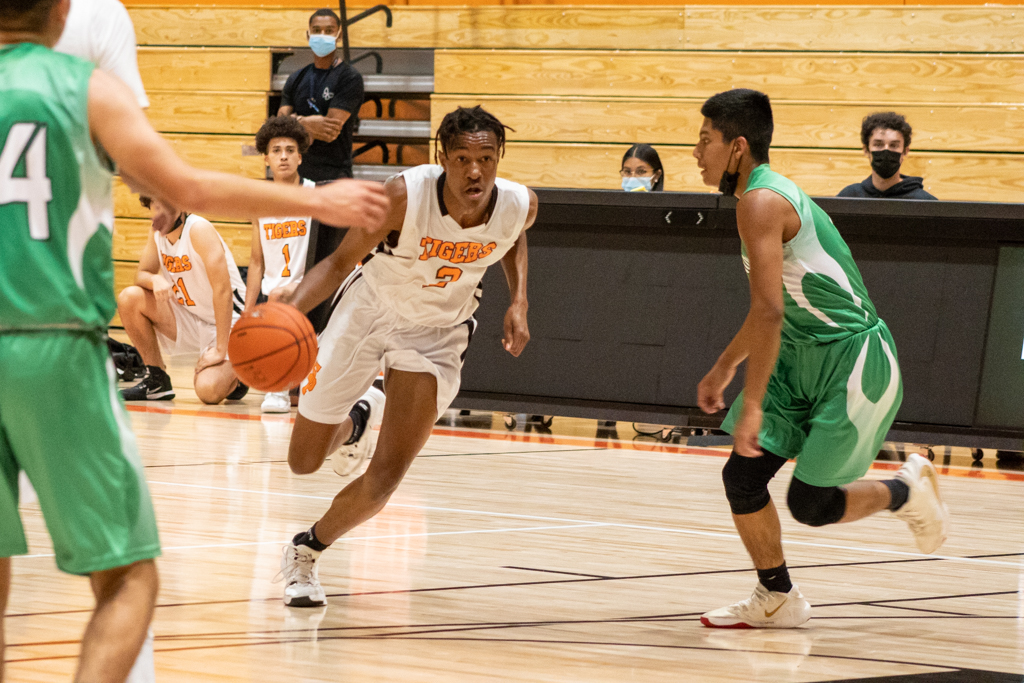 The Tigers have started their preseason off well, holding a 7-3 record.

Boys basketball slid past the Schurr Spartans 60-53 in a non-league match-up on Wednesday, Dec. 15. Although the Tigers won, there were still plenty of stolen moments throughout the game.

As the starting buzzer sounded, junior guard Nick Chabot sprinted down the court and quickly passed to senior forward Jonathan Guy who passed between his teammates, only to be intercepted by Schurr.

The Tigers quickly regained control with Guy shooting to senior guard and forward Niko Lawrence who scored the first two-pointer of the game. Minutes later, senior guard and forward Ezekiel Pannell poured in three more points off a pass from Lawrence. Getting to the basket was easy for the Tigers, but getting the ball in was more of a challenge. Both sides struggled in this field, as Schurr had four consecutive failed baskets.

Senior center Sage Wayans, halfway through the first period, reignited the game with power and drive. Wayans darted down the court, dodging incoming Schurr defenders to score a three-pointer and another point off a free throw.

South Pas kept up the momentum as the ball seamlessly moved between Chabot, Guy, Pannell, and Wayans. But Schurr was an even match, intercepting the ball and superseding control. Tiger’s defensive guards, primarily Chabot and Guy, stretched their bodies in attempts to thwart the other team.

Guy saved the ball via an in-bound pass and Wayans took control, evading the Spartans to secure three more points for the Tigers with an additional two free throws to bring the score to 11-10.

Towards the end of the first period, the competition stiffened. The Tigers tried to make headway down the court but Schurr intercepted and scored three more baskets. However, there were successful breakaways, like Pannell, with an assist from Chabot scoring his first set of points of the game.

With time ticking down, South Pas took control with another score from Lawrence bringing the Tigers up 4 points with a 18-14 lead.

Schurr earned a basket early on in the second quarter, and the Tigers regrouped by circulating new players. Freshman guard and wing Oni Balogun took over for Chabot who proved to be a formidable defender. Additionally, junior wing Finny Ho was rotated in and dominated the offense, scoring a three-pointer. Schurr attempted a resurgence but was stopped by guards Lawrence and Guy. The ball was eventually passed to Wayans who dunked and scored.

The second quarter was a transitional time for the Tigers, as new blood was rotated in, so were reliable players to help lift them from the constant interceptions. Chabot returned and quickly re-established his control of the game, refusing to let the Spartans touch the ball. By the end of the second quarter, the game was tied 23 apiece.

South Pas reunited with fire in their eyes and passion in their footwork for the third quarter, determined to win. Wayans scored a one-pointer, immediately followed by Pannell scoring a two-pointer, tallying the score to 26-23.

Schurr was determined to not give up their hold, challenging the Tigers with five more points. Wayans and Chabot continued to command the game, bringing the Tigers to 34-29. Tiger’s impressive footwork was no match for Schurr, who scored again. In a quick turnover, Schurr scored 43-39. Schurr ran out the clock and avoided any drastic moves.

Frustrated with the third quarter upset, the Tigers returned impassioned and ready to fight. Chabot gained control and scanned his options. Schurr raced to the ball and passed between their players, eventually scoring without much Tiger interference.

Throughout the game Schurr gained the upper hand through fouls, which led them to move their score to 40 points. During many of the passing moments, Wayans was cool and calculated, while Chabot continued to be a firecracker, darting his eyes between his fellow players. Guy wanted in on the fun and passed to Wayans who scored a two-pointer followed by a one-pointer.

As the spectators shouted “Defense” from the sidelines, South Pas took note. The Tigers continued their fierce aggression. Ho scored a three-pointer and Schurr followed close behind to take the lead 50-46. Chabot maintained aggression and ferocity while Wayans stayed calm and collected and scored again, tying up the game 50-50. With tremendous teamwork, Ho scored off an assist from Pannell, and a successful shot from Guy put the Tigers ahead 54-50.

Complex fourth-period passing between Pannell, Guy, Chabot, and Ho led to another basket by Guy who moved the Tigers to 56 while Schurr trailed at 50. Off of Schurr’s personal fouls, Wayans completed another free throw. Guy remained aggressive, eventually costing him a foul. The tensions were high in the final minutes of the game as both teams pushed for the lead.

Schurr continued to play a valiant game, gaining three more points. In response, Wayans and Chabot scored vital free throws that brought the final score to 60-53, in the Tiger’s favor.

“They were a really tough team and they made us better as a group,” Wayans said. “A couple of tough losses and this got us. I think we’ll have a better energy starting off the games now.”

The Tigers will play their next non-league game at La Serna on Saturday, Dec. 18.