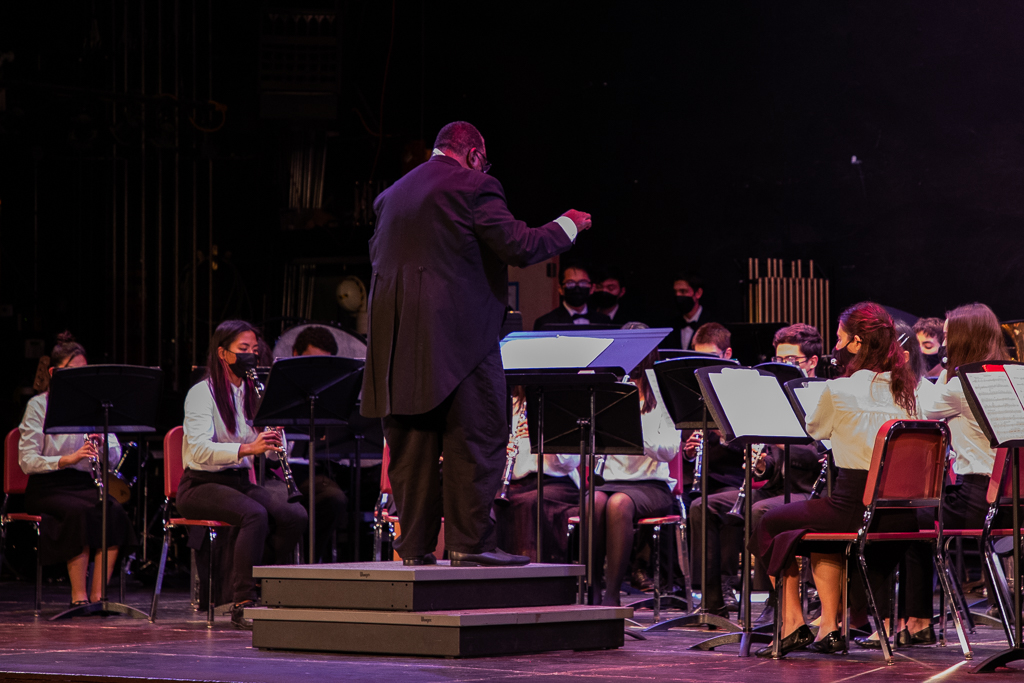 SPHS’ Concert Band, Orchestra, Symphonic Band, and Jazz Ensemble performed in their annual Winter Concert on Thursday, Dec. 9. The Winter Concert brought the community together for 90 minutes of music and was a culmination of the work all four groups put in this fall under the direction of music director Howard Crawford.

Principal John Eldred gave a brief introduction before the concert kicked off with Concert Band. The 37 members of Concert Band enriched the auditorium with their performance of Gary D. Ziek’s “Detonation,” a long and intense piece that set the tone for the rest of the show. The strong percussion presence helped capture the fierce mood. To follow up the song, Concert Band played selections from The Nightmare Before Christmas, arranged by Michael Brown.

Orchestra went for a more peaceful, light theme, playing “Everything” by Larry Clark and “The First Noel” by Dan Forrest. For two songs, senior Cassandra Huang’s harp playing was accompanied by a performance from the violins, cellos, and violas.

The next songs performed by Symphonic Band were composed mainly of juniors and seniors. Symphonic Band played three songs that featured a wide range of instruments including flutes, oboes, french horns, euphoniums, and piccolos. The ensemble played two lighthearted and energetic pieces: “Chase the Shouting Wind” and “March of the Toys.” They also played a unique variation of the “Dreidel Song,” causing numerous audience members to nod their head or stomp their feet along with the beat.

The concert then transitioned to Jazz Band, who played six songs. Solos from senior trumpet Holden Sokey, freshman trumpet Sebastian Thompson, senior trombone Aimee Yokomizo, and junior trombones Avik Guatman, Aria Argus, and Perrine Changkuon elicited resounding applause from a packed auditorium. Crawford played along on the saxophone as well. After the final song, every member took a bow and the concert came to a close.

“After not performing for two years in front of an audience I really enjoyed playing in a concert,” Thompson said. “Everyone did a really good job and given the limited amount of time we had to prepare, everyone rose to the challenge.”

Band will now begin work for their next concert which will take place in the spring.