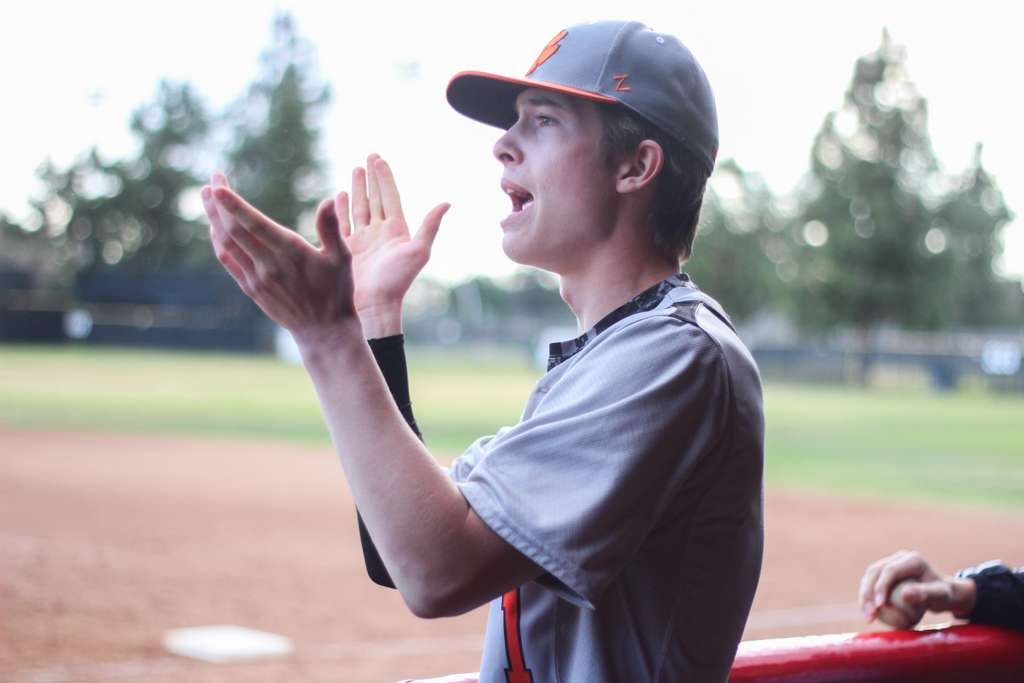 Junior Adam Schroeder applauds a teammate's effort from the bench.

Baseball was defeated 6-2 by rival San Marino in their opening league game on Friday, March 16. The loss was the result of superior batting by the Titans.

The Tigers took and maintained a lead early on, with senior Matt Walker and senior Edwin Garcia scoring two runs in the top of the first, after hitting singles and stealing. They were batted in by senior Sydney Luna.

For the first three innings, senior Jackson Totleben pitched admirably, netting five strikeouts and numerous fouls and fly balls. However, the Titans picked up traction during the bottom of the fourth, after a single and two steals placed a runner on third. An RBI single gave San Marino their first run, thus setting the stage for an impending onslaught.

In the fifth inning, the Tigers’ offense fell flat, with no base hits by the three batters. San Marino scored on an RBI double, while a fielding mistake by the Tigers allowed another run. The Titans played methodically by repeating a hit-and-steal pattern three times in the inning, thus ensuring that a runner could be placed quickly on third. A pitching error and failed catch on the fence gave two more runs to the Titans, with the score at 5-2.

Nearing the end of the disastrous fifth inning, junior Noah Parker was brought onto the mound for a change of pace. The inning was closed with a double play, but the damage had been done.

San Marino scored their final run on an RBI single during the sixth inning. The Tigers were unable to match their opponents’ offensive capabilities, as no runners advanced beyond second base. Three consecutive strikeouts sealed the final inning. In total, San Marino dealt out thirteen strikeouts over the course of the game.

The Tigers will play their next league game at La Cañada on March 20.