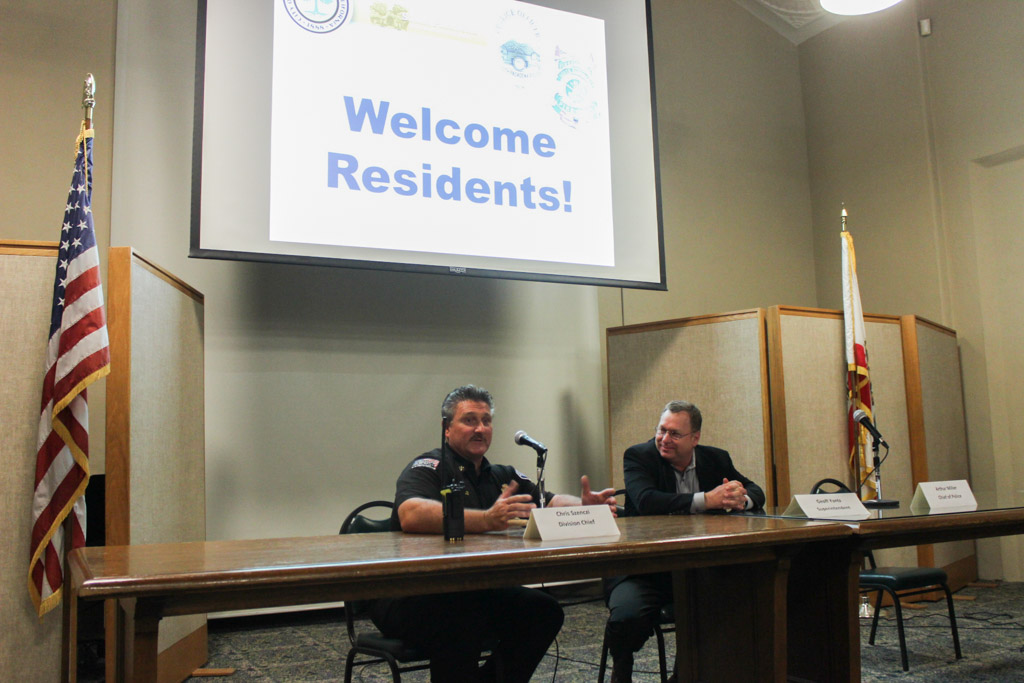 Parents and concerned community members attended the informational session, inquiring about plans for South Pasadena students in possible safety threats, particularly those brought to light with school shootings across the nation. Division Chief Chris Szenczi introduces himself to the community members in attendance.

South Pasadena officials are taking steps in preparedness for the possibility of a school shooting, following nationwide concern over the safety of students. In light of the recent Parkland, Florida high school shooting and a student walkout at South Pasadena High School, South Pasadena’s Police and Fire Departments (SPPD and SPFD) hosted a public meeting to lay out response plans for active shooter scenarios. 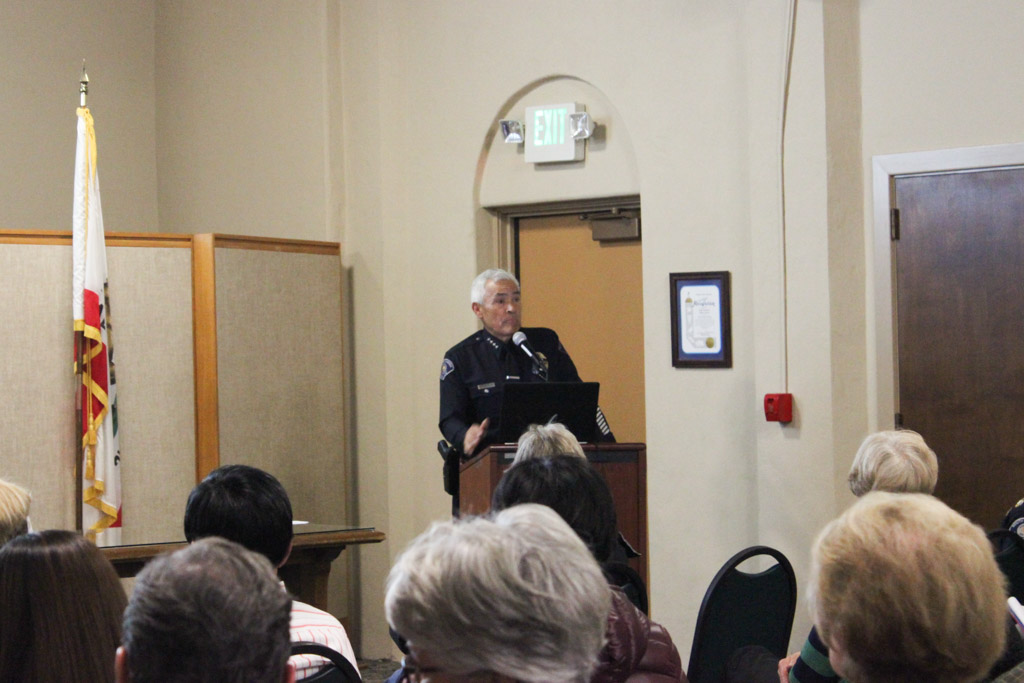 SPPD Police Chief Art Miller speaks about the various active shooter drills that have been performed.

Chief Arthur Miller of the Police Department, Division Chief Christopher Szenczi of the Fire Department, and Superintendent of Schools Geoff Yantz of SPUSD hosted an informational presentation. Afterward, the panel answered questions from those in attendance, pertaining to topics such as a unified communications system for all schools in the city and the role of parents in ensuring students’ safety. 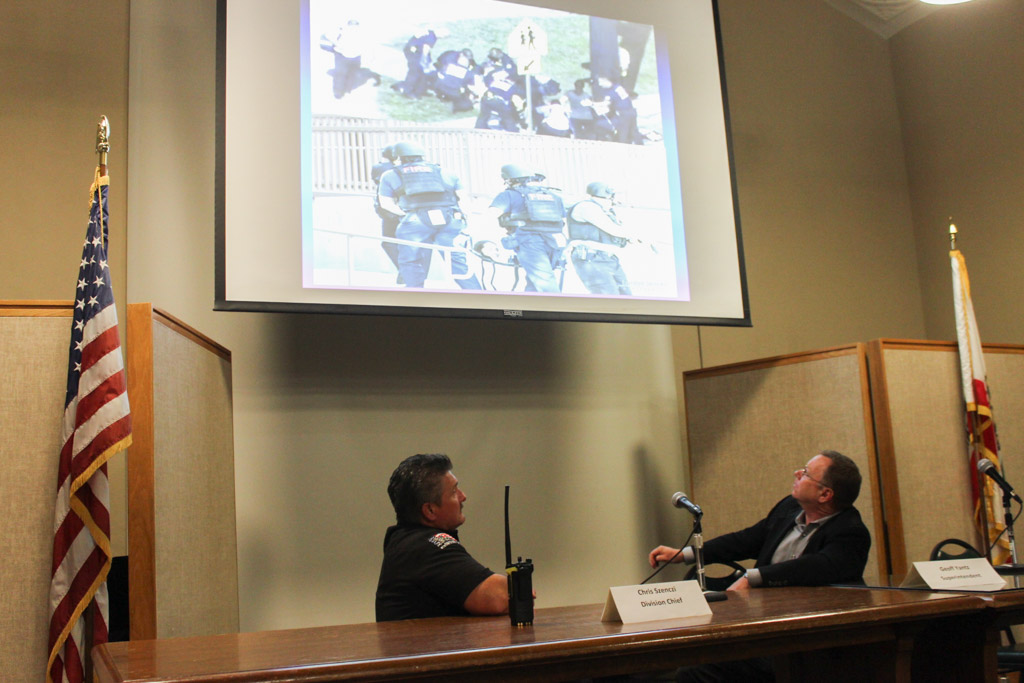 Division Chief Chris Szenczi and SPUSD Superintendent Geoff Yantz address their attention at the projection. Police Chief Art Miller spoke about the similarities between the image from the Parkland, FL school shooting and the image from an active shooter drill performed at SPMS.

Chief Miller outlined SPPD’s efforts in tackling shootings, especially new methods that were adopted following a threat directed at the SPHS in 2014. The most prominent of the new procedures are training sessions targeted towards active shooter situations. Officers, dispatchers, and EMTs receive training on a monthly basis so that the police are ready to deal with a hostile situation at a moment’s notice. Police are trained to move quickly in tight units, protect and evacuate civilians, and contain and neutralize aggressors.

South Pasadena Police have also created innovative solutions for the benefit of neighboring cities. Sgt. Tony Abdalla of the SPPD devised a medical training program as part of the Mutual Aid system. It provides officers across the San Gabriel Valley with first aid skills, which are extremely important in responding to violent crimes. So far, the training has saved seven lives.

The police also plan to work with the district to provide schools with active shooter drills, which will begin after administration and faculty have received thorough instruction. Superintendent Yantz thanked the police for their active cooperation in improving the city’s public safety.

“[The Police Department] is really a treasure, and we should be supportive of that,” he said.

Yantz then explained another facet of preventing shootings, which is aimed at recognizing troubling signs and providing the necessary counseling. When the school receives reports of a student struggling with mental health or crime issues, the administration will set up counseling sessions with behavioral and psychological specialists, which may also be attended by the police’s Student Resource Officer. The student will then be referred to outside services for long-term counseling.

Parents in the audience stated that they did not know of any mental health services in schools. Another common complaint was the small amount of mental health specialists, as most of the school’s counselors are specialized in academics. The general consensus among the audience was that more attention is needed towards psychological issues, and that parents need to communicate more with their children about emotional well-being.

While shooting threats are treated the same regardless of location, the police’s handling of students differ based on age. Students at the high school will be treated as potential suspects during a violent situation, as seen in the Parkland shooting, when officers approached students with guns drawn. In contrast, elementary school students are dealt more protection due to their young age and lack of supspicion.

Parents were urged to talk to their children about proper safety practices and mental health, and to inquire about the schools’ safety procedures. Another precaution recommended at the meeting was to report any dangerous sign to schools and police, including suspicious threats made on social media, as a study on mass shootings found that 80% of perpetrators disclose their intentions beforehand. A central theme at the discussion was “See something, say something,” which stresses the importance of being alert and proactive.