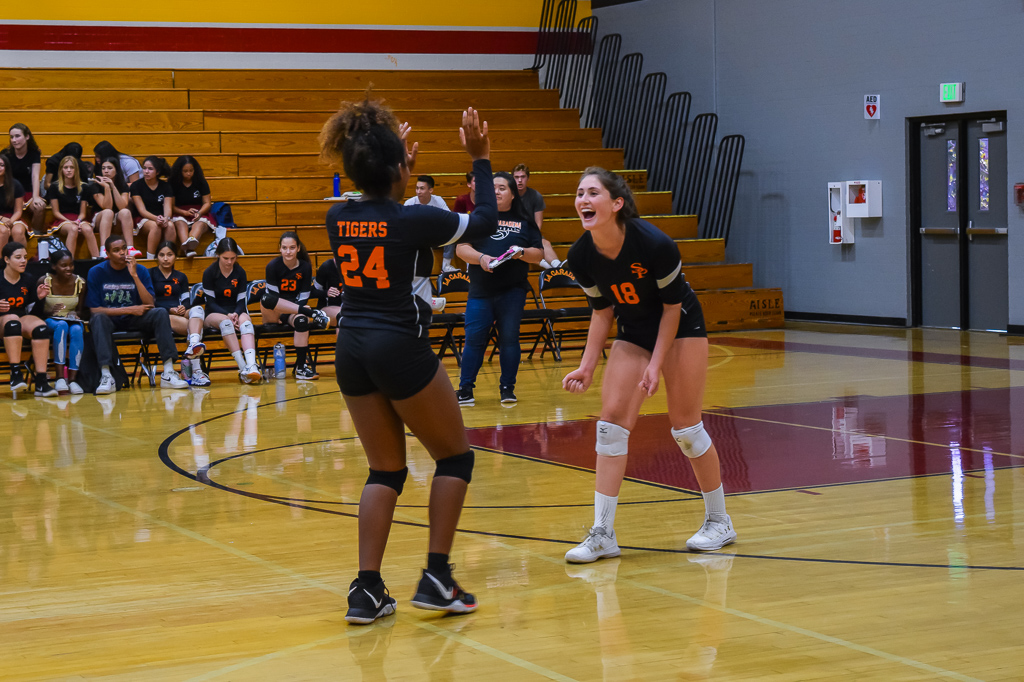 Both starters, Garner (18) and Reyes (24) play vital roles for the Tigers’ success.

South Pasadena’s girls varsity volleyball team is one of pure talent. With a diversity of skill and experience, winning comes easily for the Tigers. While the spotlight is on juniors Lola Foord and Lindsay Hirano for their violent spikes and defensive digs, the underclassmen depth is the Tigers’ key to success.

The talented sophomore trio of Alyssa Sokolow, Abby Garner, and Kennedy Taylor has returned for its second varsity year and is vital to the Tigers’ success. As a strong outside hitter, Sokolow excels at racking up kills and thundering blocks. Garner provides the Tigers with yet another dangerous hitter alongside Foord, while right side hitter Taylor furiously blocks incoming hits.

This year, the varsity team welcomed freshmen Ava Dorny and Sofia Reyes. Returning players had no trouble connecting with them and quickly formed a team bond, helping the Tigers to grow closer and stronger.

“I feel that they have all welcomed me to the team and we are all a family,” Reyes said. “Some benefits for having us on the team is that other teams in our league aren’t expecting us freshmen.”

Although many of the underclassmen lack experience playing with older players, they make up for it with the unique skills they bring to the team. Additionally, along with the opportunity to learn from their more adept new members and further develop their skills, the team has a bright outlook for the future.

“I think having underclassmen on our team has benefited us because it brought a fresh new talent that we really needed because of all the seniors that graduated last year,” junior Sydney Abundo said.

The Tigers rely heavily on the underclassmen — Garner, Sokolow, and Reyes are regular starters, while Taylor and Dorny are reliable rotation players — and they’ve delivered. South Pas has won the RHL title with an undefeated 10-0 record and are poised for a deep CIF run. But even beyond this season, the Tigers will continue to be a powerhouse. With the underclassmen accustomed to a winning culture, girls volleyball is set for a fearsome dynasty for years to come.