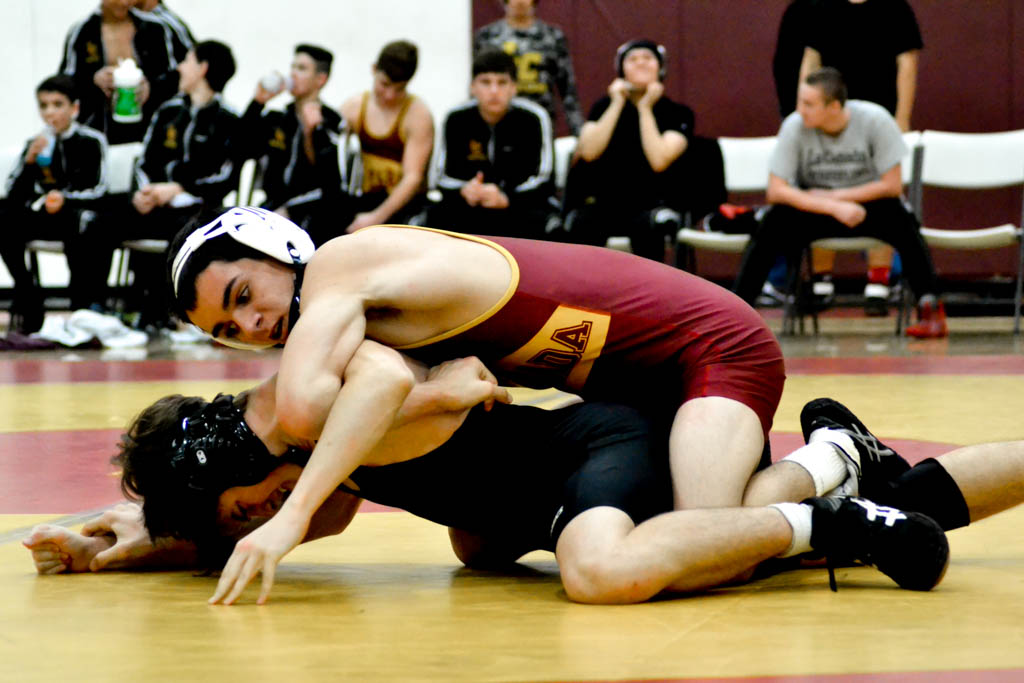 The Tigers lost their first league match at La Cañada High School on Thursday, January 5. The Spartans had a significantly higher number of fouls and dominated with a score of 61-18. Of the eight varsity matches that were held during the duel, South Pasadena lost five.

As soon as the buzzer blared, it was easy to predict who would win each set. Sophomores Sung Ham (106 lb) and Lauren Lopez (113 lb) wrestled all three sets but lacked the opportunity to score, bringing the match to 0-7. The team still had hope when junior Irvin Perez (120 lb) stepped on the mat. Perez struggled with his opponent during the first set, but managed to wrangle the lanky Spartan wrestler into a pin, bring the score to 7-6.

Sophomore David Szilagyi faces off against an opponent

Freshman Chris Kim (126 lb) was faced with a more experienced La Cañada opponent and was quickly pinned in the beginning of the second set. This was followed by junior Nate Martinez (136 lb) and sophomore David Szilagyi (145 lb) both being pinned in the first period, which brought the score to 31-6.

The Tigers desperately needed to make up points, and there was a glimmer of hope during junior Sebastian Chinen’s (152 lb) match. Chinen displayed superior technique and skill over his opponent and came to close the duel with a pin in the second period. Although his efforts helped the team, the Tigers were still behind with a score of 49-12. In the final match, senior Brayan Quintana (195 lb) and his opponent struggled for control but Quintana quickly took down his opponent in the first set with over a minute left on the clock.

Junior Ivan Perez is grapples with his opponent

In the end, the Tigers’ scramble to make up points towards the conclusion of the match did not  balance with their inability to score in the beginning. The La Cañada duel marked the Tiger’s second competition since their entry in the Downey Tournament on December 16. South Pas will prepare for their next league meet against Hoover next Thursday, on January 12.

Boys’ basketball defeated by Mark Keppel on the road