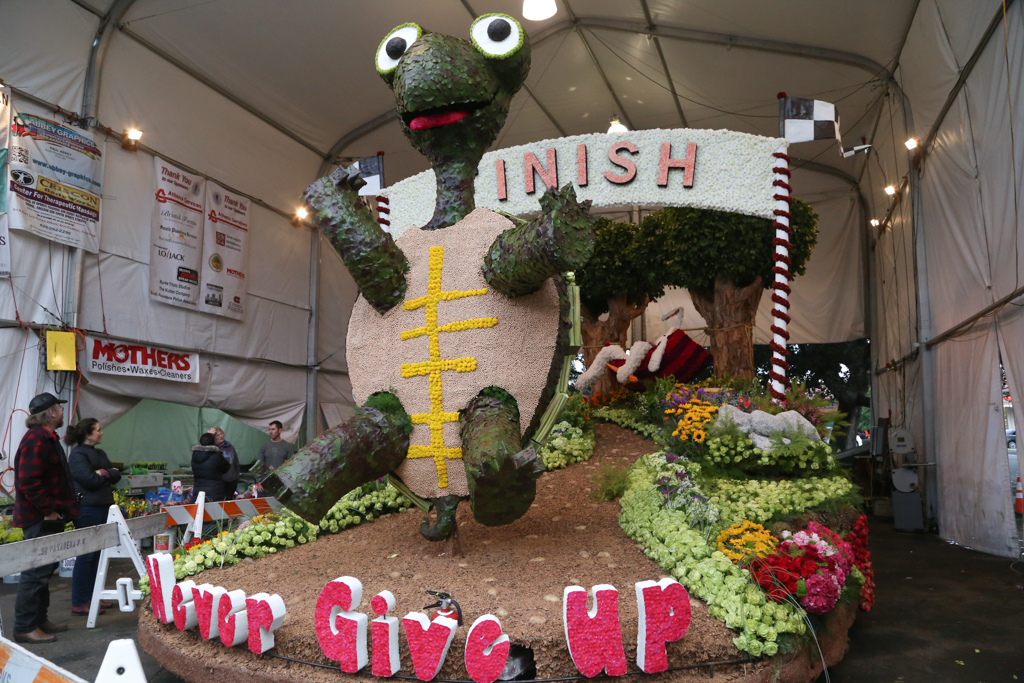 South Pasadena’s “Never Give Up” float showcased the city’s spirit along with thousands of locally grown materials for the 128th Rose Parade. As the oldest self-built float association, the South Pasadena Tournament of Roses portrayed the classic Aesop’s fable of “The Tortoise and the Hare.”

This year’s colorful float featured 43 different colors of roses, locally collected Eucalyptus bark, and a walnut shell from northern California. A towering tortoise of ivy and galax leaves headed the float, crossing the finish line and greeting 2017. Far behind, a hare made from raw cotton napped on a hammock of hot pink and magenta carnations. A path made of 200 pounds of russet potatoes ran through the center of the float between trees and thousands of roses.

The appropriately-named “Never Give Up” float motto described the series of difficulties that the SPTOR faced in the building process. Three instances of burglary occurred in the months leading up to the parade, in which thousands of dollars in parade souvenir items and two 20-foot steel rods were stolen from the building site at the War Memorial Building. The committee notified the South Pasadena Police Department, who furthered patrol on site to prevent additional instances. In spite of the thefts, South Pasadena residents and city councilmembers continuously contributed through donations and volunteering in the months leading up to the parade.

“A little over $5,000 was taken from our site, so we mentioned and reported it in our donation letter,” Decoration Chair and SPTOR president Janet Benjamin said. “The outpour from the community has been so amazing; everyone really stepped up for the float.”

“My job mostly consisted of covering long strips of bark with rubber cement and putting it aside so it could become tacky [for] the tree base, [and] I got some insight into the more technical aspects of float building,” sophomore Finley Mullen said. “After seeing the parade, it looks amazing with everything in place and the [entire] display looks way better than I could have imagined.”