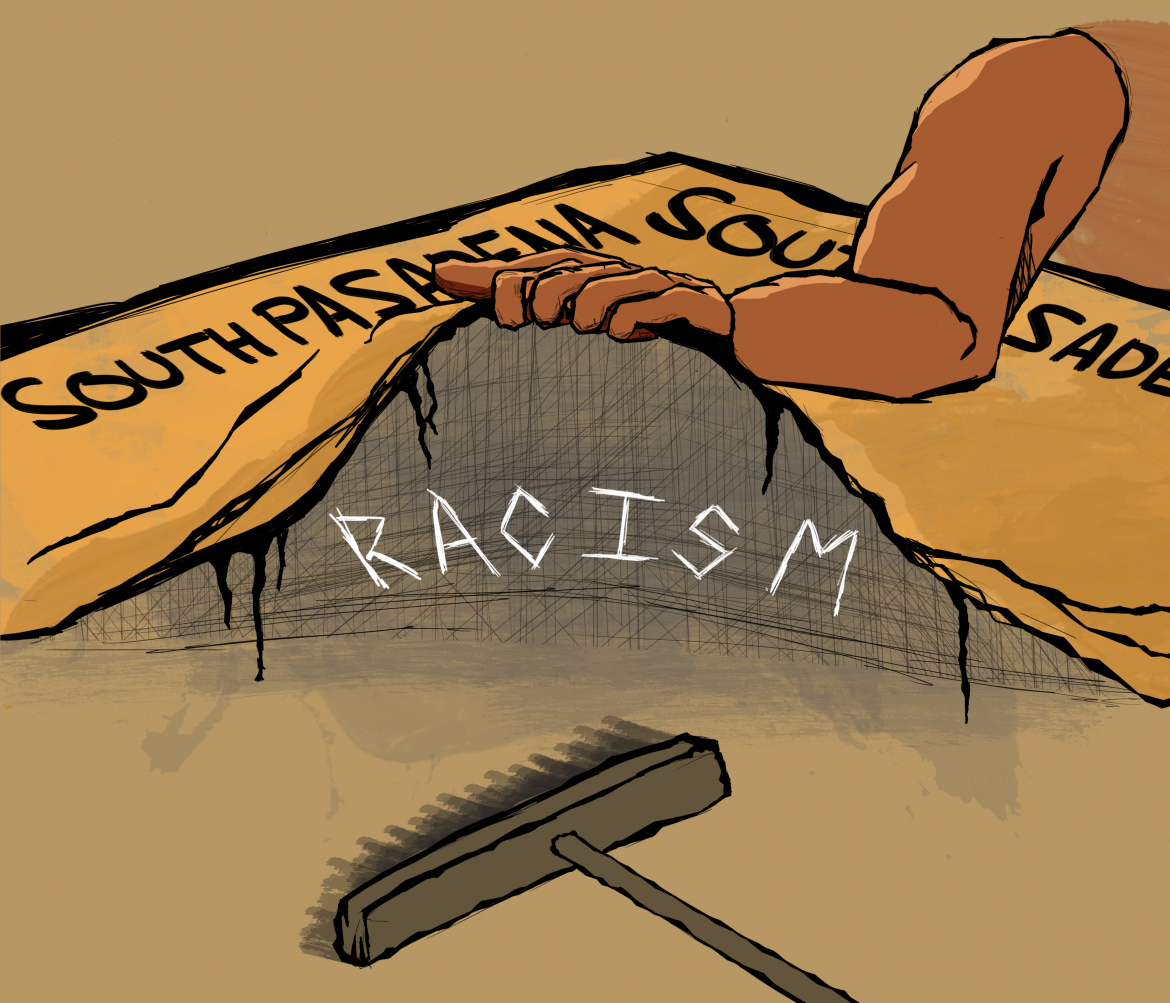 The South Pasadena Unified School District must be a catalyst in addressing and solving the issues of racism in America by implementing a curriculum of its very own racist history into classrooms.

Racism, segregation, and discrimination are all part of our country’s history. And they all undoubtedly still exist. White supremacy and the subjugation of minorities are entwined with the American narrative. Racism in the United States conjures up images of brutal slavery, Native American genocides, and immigration laws discriminating against Asians, among others. But the corrupting plague of racial domination extends much farther than that — into our very own South Pasadena.

I certainly had no idea of our city’s history of racism, not until my ninth grade English teacher, Ms. Kadri, gave us the article “When South Pasadena Was For Whites Only” (see link below). I was shocked. South Pasadena is a diverse and inclusive liberal bubble that completely disguises its dark, terrible past. We hardly teach or even acknowledge it.

South Pasadena was a whites-only town until 1964, a mere 55 years ago. Then city manager Frank Clough boasted about this “accomplishment” in 1946.

Clough declared, “We do not have any Negroes, nor do we have any other non-Caucasian people in South Pasadena” (The California Eagle).

South Pas was essentially a sundown town that bandwagoned on the discriminatory trend in our nation at that time. Minorities were allowed in by day to work, but they had to be gone by nightfall. There is even evidence of an air-raid warning system that could have signaled non-white visitors to vacate the city. Local swimming pools and other facilities were strictly segregated by race. The city council drew up restrictive covenants to bar any people of color from homeownership.

It is hypocritical to call our city a welcoming place for everyone if we don’t recognize and learn from our own history. We need to accept racism as part of our town’s past. The best way to do that is to teach it to the youth. South Pasadena’s history of racism should be incorporated into elementary school social studies curriculum.

South Pasadena is not immune to white supremacism, despite what we’d like to believe. Last year, on the night before Halloween, a masked intruder was caught on camera taping up fliers around the SPHS campus that read, “IT’S OKAY TO BE WHITE.”

And even now, racial prejudice is not an issue to discuss in the past tense. It is still alive and it is fighting to tear apart the diverse fabric of our community.

We need to go after the root of the problem if we want to eradicate the hate filling our community and world. The United States has never formally apologized for kidnapping, torturing, and enslaving millions of people. Our country has not taken significant action to repair the damage caused by Japanese internment or to ensure that it never happens again. Instead, those issues have evolved into more subtle, but still very dangerous, forms of discrimination, like mass incarceration and sterotyping. We can’t solve a problem if we refuse to acknowledge it. The only way this wound will ever truly heal is by facing the facts. The South Pasadena Unified School District can and should be a catalyst in that movement.

Our town has taken many steps to embrace differences. We have established a Multicultural English program in the high school, started teaching dual immersion in elementary school, and are working to foster an overall environment of inclusiveness. But how we teach our history doesn’t match this progressive identity.

The elementary schools should dedicate a sizable chunk of their social studies unit on South Pasadena history to teaching students about racism, both past and present. Curriculum should be aided by historical resources and articles, multiple media sources, class activities, and projects. The earlier we learn about these real-world issues, the more equipped we will be to defeat them. We can’t wait until high school to reveal South Pasadena’s racism. It needs to happen in elementary school.

I spent a lot of time learning about South Pasadena when I was a third grader at Arroyo Vista. We discussed the first native inhabitants, the missions, the Rialto, and other historic milestones. But the racism in our own community wasn’t mentioned at all. That is a serious problem.

Teachers and students alike need to be made aware of discrimination in their city’s past. Examining the prejudice in our own community 60 years ago will help our schools raise a generation of tolerant kids and reverse the growing tide of white supremacy in our own town and country.

“When South Pasadena Was For Whites Only” http://hometown-pasadena.com/history/when-south-pasadena-was-for-whites-only/88641