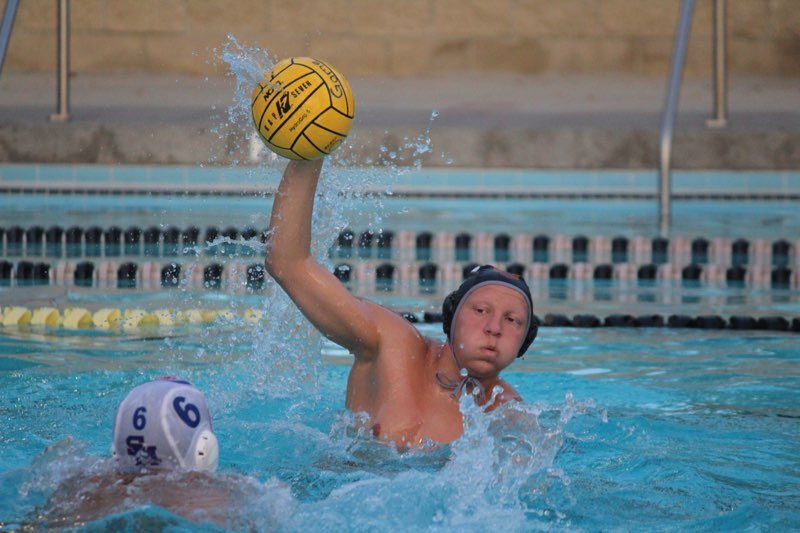 One of the 12 seniors, Lucas Abrahamian, led the Tigers offense but it wasn't enough for the Royals as they took the 14-9 win.

Boys water polo secured the Rio Hondo League title this season en route to a CIF qualification, finishing with a 17-11 record overall and a dominating 10-1 mark against league opponents. The team won 10 of its last 12 games heading into its Division II CIF matchup, hosting the San Marcos Royals of Santa Barbara. Despite riding a wave of momentum through the second half of the season and playing in front of an enthusiastic Tiger crowd, water polo fell 14-9 against San Marcos on Tuesday, Nov. 2.

San Marcos won the swim-off to begin the game, going on to score the first points. Senior Will Michels misfired on the Tiger’s first shot attempt, and the Royals responded with a goal to make it 2-0.

Seniors Lucas Abrahamian, Owen Imasaki, Egan Hadsell-Florin, and Blix Hadsell-Florin all showed San Marcos an early sense of aggression with well-timed passes and shots that just missed the back of the net. As the defense kept intercepting passes and forcing fouls, the Tigers finally broke through to get on the scoreboard. It was a goal by B. Hadsell-Florin that cut the Royals’ lead in half.

The first quarter quickly became the second quarter and San Marcos scored its third and fourth goals of the game on consecutive possessions to extend its lead. South Pas struggled to keep up with San Marcos’ offensive game plan. A Royals player drew a five-meter and converted the shot to take a 5-1 lead.

South Pas was determined to not cave in, however, and Imaskai lessened the deficit to three goals. Imasaki went on to score another goal before the half, but a relentless Royals’ offense added two. San Marcos was ahead 7-3 at halftime.

The Tigers were determined for a second-half comeback, looking to erase the four-point deficit. Abrahamian, with help from Coach Lindsey Garcia directing players from the deck, scored a goal 10 seconds into the third quarter. San Marcos got the goal back, scoring on a five-meter. Abrahamian carried the team’s offense in the third quarter, finding the back of the net once again to keep South Pas on San Marcos’s heels.

San Marcos continued to suppress any momentum South Pas tried to build and scored three straight goals to take an 11-5 lead. The game looked out of reach, but the Tigers climbed back yet again with goals from Imasaki and E. Hadsell-Florin. With only a quarter left to play, South Pas was still eyeing a victory.

Each team traded intercepted passes to begin the fourth quarter, and junior goalkeeper Zack Quezada added a spectacular save to keep the game at a manageable 11-7. Abrahamian once more delivered for South Pas, bringing a packed Tiger fans bleacher to their feet with back-to-back potent goals. The Tigers were able to trim the score down to 11-9.

Unfortunately, Abrahamian’s goal was the last of the season for South Pas. The game slipped away after San Marcos scored three more goals, and South Pas could not come up with the critical points or stops they needed late in the game. The final score was 14-9.

“This was an awesome run…I’m really thankful to have been a part of it,”  freshman Theo Hilger said. “There’s definitely a big gap to fill with 12 seniors [graduating] so we’re gonna have to step up our game and train this offseason. But as a younger team next year I really think we have something special and can continue to succeed.”

Despite the loss, the water polo team once again rose to high expectations with a league title and a CIF spot. In the first year under Coach Garcia, the Tigers proved they are capable of accomplishing everything they set out to do. Water polo now looks to next fall for a rebuilding season.