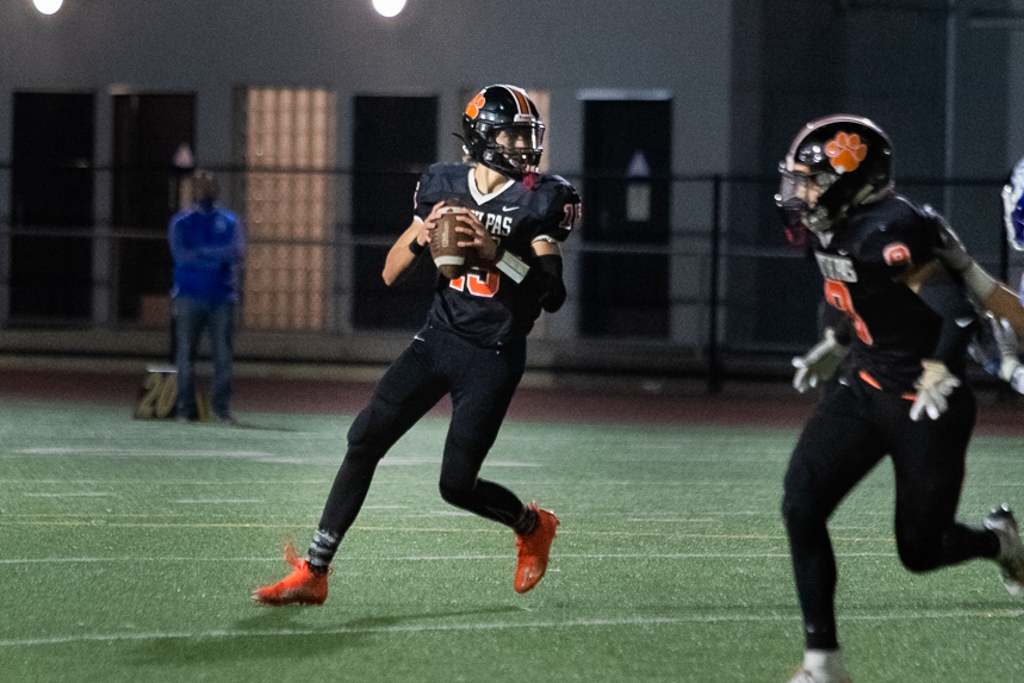 The Tigers failed to gain ground, only reaching the end zone once in the 56-7 game.

Coming off of three straight home games and a CIF-clinching win against San Marino last week, football traveled to Monrovia’s Wildcat Stadium and were greeted rudely. In the final game of the regular season, a contest that would decide the winner of the Rio Hondo league, Monrovia overwhelmed South Pas and emerged victorious at 56-7.

An explosive Wildcat offense led by Carlos Hernandez’ five touchdowns and a suffocating defense were too much for the Tigers. South Pas will finish its season at 5-5 and look to make a deep CIF run.

Junior Jackson Freking played in place of concussed senior Noah Aragon as quarterback and was thrown into the fire against Monrovia. South Pas punted the ball after a three-and-out on itrs first drive, and Monrovia needed only one play to get into the end zone with a 30-yard touchdown pass. Under two minutes into the game, the Wildcats led 7-0. Monrovia took an early lead and did not look back.

Next, Freking threw an interception deep in the Tiger’s territory and it was returned for a touchdown. South Pas’ deficit grew to 14 points.

South Pas punted again on its next drive, failing to provide Freking with any time to throw or any open receivers to connect with. The Wildcats, behind an athletic quarterback and a fast receiving core South Pas could not catch up with, scored yet another touchdown to take a 21-0 advantage only six minutes into the game.

The Tigers showed grit on their next drive as they tried to cut into the Wildcat lead. Senior Jack Riffle found lanes to run and gave the Tigers their first yards of the night. Senior Grant Huntley, coming off his game-winning touchdown performance last week against San Marino, was a favorite target of Freking and was able to establish a South Pas passing threat. Riffle plowed his way to the end zone for a Tiger touchdown that would end up being the only points of the night for South Pas.

The Tigers were unable to keep the momentum, however, as Monrovia would go on to score five unanswered touchdowns before the final whistle blew.

After the first half, the Wildcats lead 35-7. Two plays into the second half, the Wildcats’ led 49-7. Monrovia moved the ball at will and South Pas was unable to find any offensive spark with interceptions, dropped passes, and unproductive drives. With the score so lopsided early in the third quarter, the clock didn’t stop the entire second half which took just under 30 minutes.

The Wildcats added another touchdown to win the game 56-7, nearly tripling South Pas in total yards throughout the game. Monrovia’s speed, physicality, and size was a major factor in its win, a victory that gave them the Rio Hondo League crown. The Wildcats finished their season an undefeated 10-0 and blew past all league opponents.

“Our regular season is over, but now we are focusing on playoff season,” head coach Jeff Chi said. “Our team has done a great job of beating our rivalry team and qualifying to CIF. [But] we still have more work to do!”

South Pas wraps up a successful season at 5-5, putting them in third place in the league behind Polytechnic and Monrovia. Victories came against Marshall, Alhambra, Temple City, La Cañada, and San Marino, while they fell short against Lincoln, Boron, Heritage Christian, Polytechnic, and Monrovia. The team will play the Magnolia Sentinels in the first round of  CIF playoffs at home on Friday, Nov. 5.