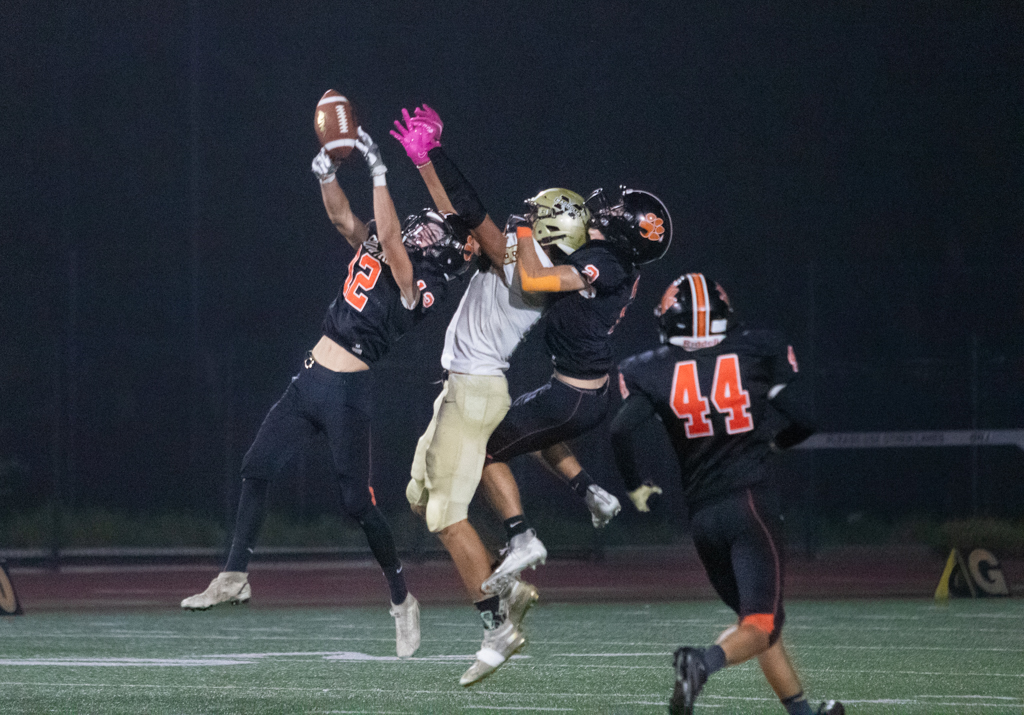 The Tigers advanced to CIF quarterfinals for the first time since 1977.

The last time SPHS football celebrated a CIF victory in front of its home crowd, the entirety of the current roster hadn’t been born. On Friday, Nov. 5, the quarter century CIF drought ended, winning for the first time since 1997. Hosting the Magnolia Sentinels of Anaheim in Round 1 of Division 13 CIF play, it was the seniors that put the team on its back to deliver a historic win.

Seniors Noah Aragon, Jack Riffle, Grant Huntley, and Alex Gonzales came up time and time again to propel South Pas to victory. Of course it didn’t hurt that the young stars of the program, freshman James Dowd and sophomores Luke Riffle and Thomas Carter, among others, showed why the future of Tiger football is in good hands.

An emphatic defensive statement from South Pas held Magnolia to 14 points and kept them off the scoreboard in the second half. The offense added more plays to its highlight tape and delivered momentum-swinging plays. In the first home CIF game since 1997, Tiger fans filled the bleachers to let the team know this would be a major moment in South Pas football history.

The Tigers offense wasn’t clicking early in the contest, punting the ball on each of its first quarter drives. An offensive holding call and a sack put a stop to the Tigers first drive, and they couldn’t take advantage of a 30-yard catch from Huntley on their second. Magnolia began a long and grueling eight-minute drive, using a strong running game and multiple fourth down conversions to move them closer to the end zone. The Sentinels scored the first touchdown of the game but missed the extra point. It was one of only two they’d score throughout the match.

“We went down early and we knew we had to kick it into high gear, we had to fight,” J. Riffle said.

South Pas decided to show Magnolia its elite running game, with J. Riffle wearing down the defense and finding a seam to explode through for 15 yards. Well into Sentinels territory, Aragon handed the ball off to Riffle once again and let him do the rest. Dodging defenders into the end zone, Riffle tied the game early in the second quarter at 6-6. Junior Aidan Kinney gave South Pas the lead on an extra point. 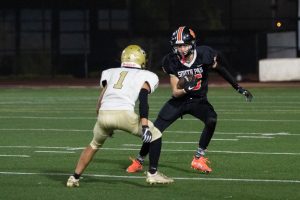 Magnolia was moving the ball on its next drive, but after two incompletions and a short run, it was fourth-and-five. They attempted the fourth down, setting up a critical situation midway through the second quarter. The Tigers go-to player in critical situations is Gonzales, and it was him on this fourth down that registered a game-altering sack.

The celebration was short-lived, however, as the Tigers turned it over on its next drive. Magnolia took over with a favorable field position but were once again overpowered by Gonzales and the Tigers high-flying defense. South Pas had one more chance to score in the first half with two minutes to play.

Aragon distributed the ball to J. Riffle and juniors Richard Conti and Nick Eshom. At their own 40 yard line, Aragon unleashed a mammoth pass, eyeing Huntley 50 yards downfield. Huntley caught the ball in stride, slipping through a tackle, and walked into the end zone with all but 30 seconds on the clock to extend the lead to 14-6. The score would hold going into the half.

The halftime show was an elaborate, near half hour production from band and color guard. Once the festivities subsided, the Sentinels started the second half with the ball. Riding the second quarter momentum, the Tigers defense forced a three-and-out. South Pas would go three-and-out as well, each team trading punts. 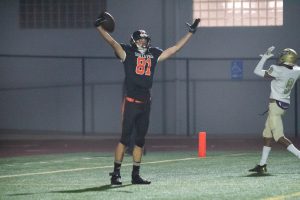 Magnolia had no offensive spark the entire second half. Whatever yards they gained were quickly negated by penalties or erased by sacks on the next play. On a Sentinels fourth-and-one Dowd got past his blocker and tackled the running back short of the first down marker.

On the very next play, Aragon connected with Dowd for a touchdown. The crowd erupted, knowing Magnolia was unlikely to recover from a two-score deficit given the Tigers defense.

“Grant’s touchdown was the real turning point of the game,” Dowd said. “Our defense made plays, it was a fantastic game, I was just there to clean things up a little bit.”

Dowd wasn’t satisfied with a fourth down stop and a touchdown on consecutive plays. He made an athletic tackle of the returner on a punt, completing an impressive sequence of events. Magnolia once more failed to move the ball and punted.

The third quarter came to a conclusion and fog set over the field as the fourth quarter arrived. Magnolia finally put together a scoring drive, set up by a 40 yard catch and capped off by a leaping grab in the back of the end zone. They attempted a two-point conversion and the quarterback bounced off a tackle and scored. With nine minutes left, it was a one score game at 21-14.

Magnolia attempted and recovered an onside kick, giving them an opportunity to tie or take the lead. Even with momentum against them, the Tigers defense delivered. Junior Quinn Sterling made one of ten tackles he’d have on the night, and senior Sage Wayans had a monumental sack of Magnolia’s quarterback. On fourth down, junior Matthew Takasugi brought the Tiger bleachers to their feet with a sack of his own.

The Sentinels had one more opportunity to tie the game after a Tiger punt, but Kinney quickly put an end to that with an interception on South Pas’ one-yard line. In the final minutes of the game, Riffle dragged defenders along with him and ran out the clock. Aragon kneeled on the final play of the game to secure the victory.

“This means the world to me,” Riffle said. “To get it done senior year, to advance to round 2 of CIF for the first time in, I don’t even know when it means everything.”

For the first time since 1997, the Tigers sideline stormed the field in celebration and fans watched their team enjoy a CIF Round 1 win.

The Tigers will look to continue the CIF heroics and hope to etch its name into the South Pasadena record books next Friday, Nov. 12, on the road against Western Christian.