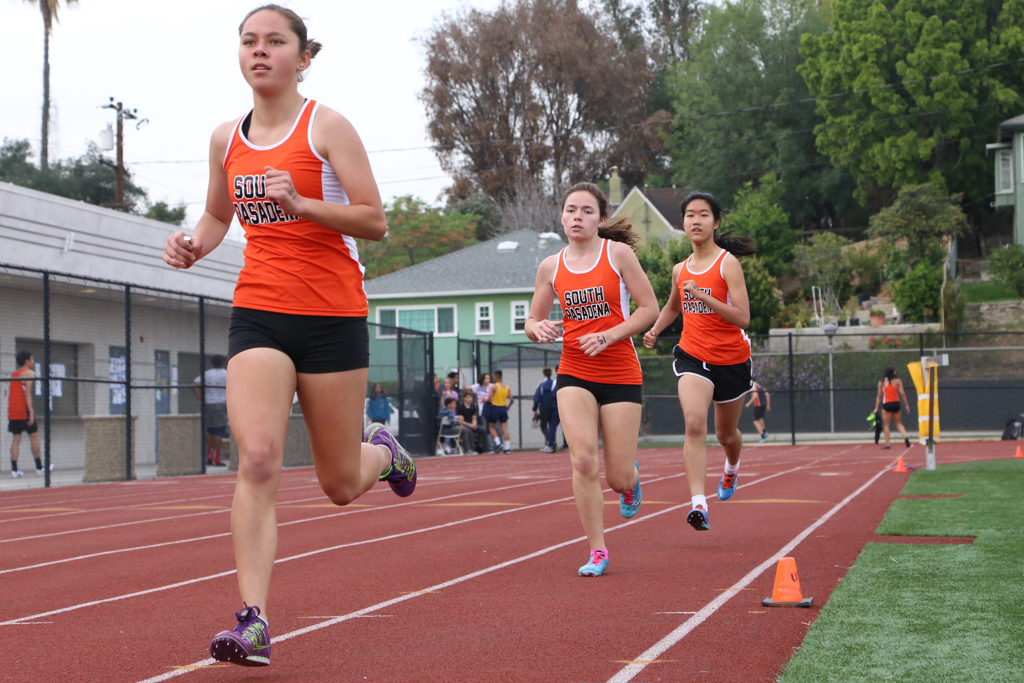 Boys’ and girls’ track opened their seasons with a sweep on all four levels in the first dual meet against Alhambra High School. The boys’ varsity team took a commanding win over the Moors 101-26 while girls’ varsity won 87-40. This continues a 20 dual meet winning streak for the boys and a 41 meet streak for the girls.

The Tigers immediately gained an early lead in the 4×100 meter relays. The boys also clinched the top three spots in the mile. Sophomore Cate Latting dominated in the 100 meter hurdles as well.

South Pasadena continued to command the meet in the 400 meter sprint where freshman Christina Taylor and sophomore Cayley Whitman garnered first and second place. Taylor also placed second behind senior Alexis Mora in the 200 meter, and she was the anchor for the 4×100. However, the Moors were able to capture the top spots in the 800, 1600, and 3200 meter runs in the girls’ races. The Tiger boys were able to clinch a majority of the wins in the distance races.

For both the boys and girls, South Pasadena won first and second place in the 300 meter hurdles. The Tigers also earned first in the shot put and in boys’ long and triple jump. In the final race of the meet, 4×400 meter relay anchor senior Amador Lagunas ran a stellar race. Lagunas caught up to the Moor runner, who had a hefty lead, in the first straightaway and managed to remain in front until he reached the finish line to garner first place for South Pasadena.

“We didn’t have the most confidence going into the relay, but we gave it our best shot and it really paid off. It’s still a little early in the season so there is room to grow but, we showed that even right now we’re a strong team in all of our events,” Lagunas said. “The mix of experience and talent that we have right now was definitely key in our success.”

The Tigers will next compete in an invitational at Oaks Christian on Saturday, March 5, where they hope to give another strong performance.