After a successful league closing, South Pas is preparing many athletes for CIF-SS D3 Preliminaries on Saturday, May 7.

Track and field hosted the Rio Hondo League Finals on Friday, April 29 at the Roosevelt Field. The festivities ended with many Tigers finishing on the podium with CIF Division 3 qualifications.

In the men’s 100m dash, junior Kainoa Jones and sophomore Zeke Gavlak finished fourth and sixth place, respectively with times of 11.33 and 11.76. The women’s 100m event was riddled with Tigers, junior Annalea Pearson, and sophomore Lyla Keller leading the way in first and second place. Seniors Skye Harris, Zoe Schlaak, and Stephanie Li were not far behind.

Sophomore Lionelle Limequeco Jr. ran the men’s 200m in 24 seconds flat, earning him sixth place. The women’s 200m event, just like the 100m event, was won by a South Pasadena Tiger. This time it was Keller taking home first in  25.97 seconds, and freshmen Jacqueline Sides and Perri Koo finished in third and fourth place, respectively.

Senior Brady Nakamura finished second in the men’s 1600m event with a personal best time of 4:25.75, earning him a spot at CIF Prelims. The women’s 1600m event saw seven of the ten runners finish in a personal best time. One of those being second place finisher freshman Abigail Errington who ran an impressive 5:04.12. Senior Sydney Morrow and freshman Amelie Geoffron were right behind her, finishing third and fourth respectively. 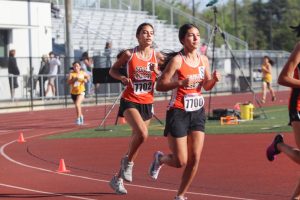 Nakamura won first in the 3200m event with a time of 9:55.59. Seniors Joshua Ramirez, Philson Ho, and Jennoh Rhee, as well as Kuhn, all finished in under 12 minutes to earn a spot on the leaderboard. The women’s 3200 meters event was also dominated by Tigers, but unlike the men’s event which was controlled by seniors, freshmen Errington and Geoffron, finished first and second, respectively.

Senior Henry Thompson finished in second place in the men’s 110m Hurdles event, with junior Aiden Villasenor placing in sixth and freshman Peter Dickinson earning fourth place. Sophomore Mia Holden was the only Tiger in the top five of the women’s 100m hurdles event. These same Tigers cracked the leaderboard in the 300m  hurdles event, with Thompson and Dickinson representing the men, and Holden representing the women.

South Pasadena earned third place in the 4×400 relay, with Limqueco Jr., Jones, Vargas, and Thompson replicating their success to the tune of a 3:51.52 time. The men’s 4×400 relay team, consisting of Koo, Riley, Sides, and Holden, earned second place.

The podium was filled with Tigers in the men’s shot put event, with seniors Nikolas Iwankiw and Noah Leider, along with junior Isaiah Cooper, sweeping in first, second, and third place. Iwankiw reached a distance of 62 feet, more than 10 feet more than the next competitor. The women’s shot put was also won by senior Violet Main who threw 31 feet. Seniors Zoe Hollingsworth and Carolina Garavito, and juniors Luna Encinas and Amanda Ruiz all garnered a top ten finish.

The men’s pole vault was another dominant event for the Tigers, with senior Averell Chen winning first place. Senior Zoe Tibbo finished in second place in the women’s pole vault. 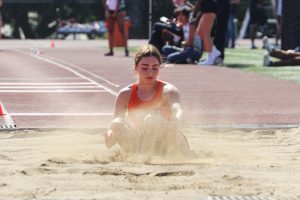 South Pasadena finished in first place in 16 different events and earned a spot on the podium in 42 events. The Tigers capped off the league season with an impressive showing. For athletes that qualified here, the season is not over yet as they train to compete in the CIF-SS Division 3 Prelims on Saturday, May 7.