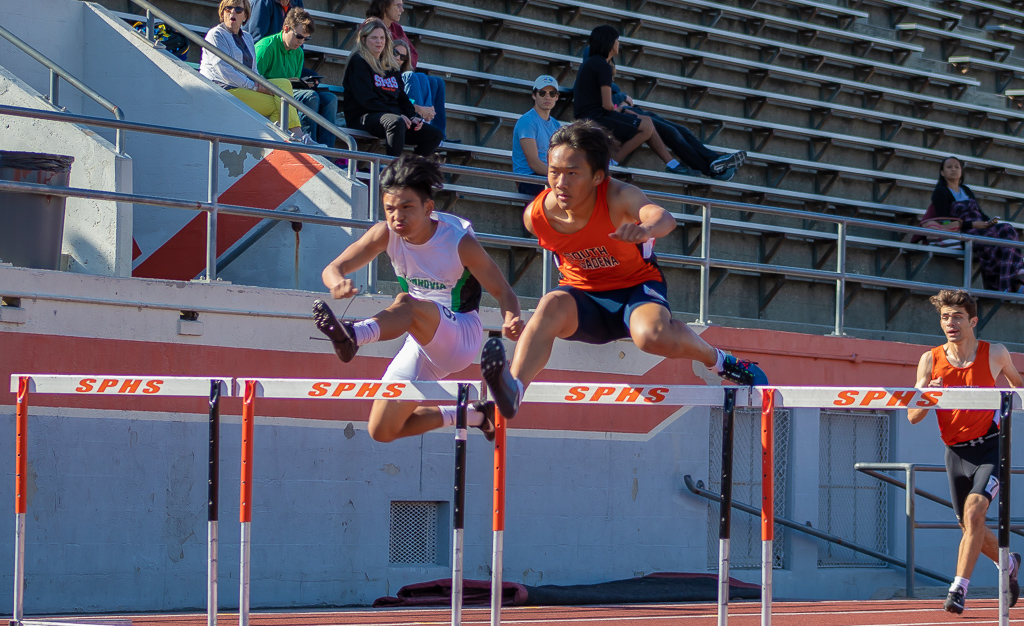 The SPHS track and field team shined under the bright lights at Arcadia high school on Saturday evening.

One day after hosting 130 schools to compete in the Tiger Invitational on the SPHS track, coach C.B. Richards sent a handful of the Tigers’ best athletes to compete in one of nation’s most prestigious meets, the Arcadia Invitational. In addition to being sponsored by Nike, the Arcadia Invitational has hosted 179 US olympians, and has had over 30 national records set. Led by junior Tianhao Wei and senior Kai Dettman, the Tigers did more than just hold their own in the highest “invitational” division against the some of the nation’s most talented athletes.

Wei set a personal record with a 47’11.75’’ leap in the boys’ triple jump, earning him third place against the stacked field at Arcadia. His near 48 foot jump was a six inch improvement from his previous best, and is the third best jump by anyone in the state of California so far this season.

“I was nervous because this was my first competitive meet of the season, and I’ve only jumped at three meets before this one,” Wei said. “But after my first jump, I was relieved and just kept with it. I’m not completely satisfied with my jump, because I know a 48 or 49 foot jump is within reach.”

In the boys’ invitational 800m race, Dettman placed fifth with a time of 1:53.77. Dettman also teamed up with sophomores Terrel Mansano and Ferrel Mansano as well as junior Ivan Estrada to compete in the open division 4x400m relay. The team set their personal record with a 3:25.46 time, earning them 12th place.

Also in the open division relays, the girls’ distance medley team earned a fourth place finish with a time of 12:33.49. Comprised of seniors Christina Taylor and Rainey Tilley, junior Gianna Beasley, and freshman Sydney Morrow, the relay team was able to stave off the competition of the nearly 40 other teams who entered the event.

The Tigers will return to their normal, less talented, Rio Hondo League competition Thursday, April 11th against the rival San Marino Titans in a dual meet at home.

Boys’ volleyball holds on for win against San Marino