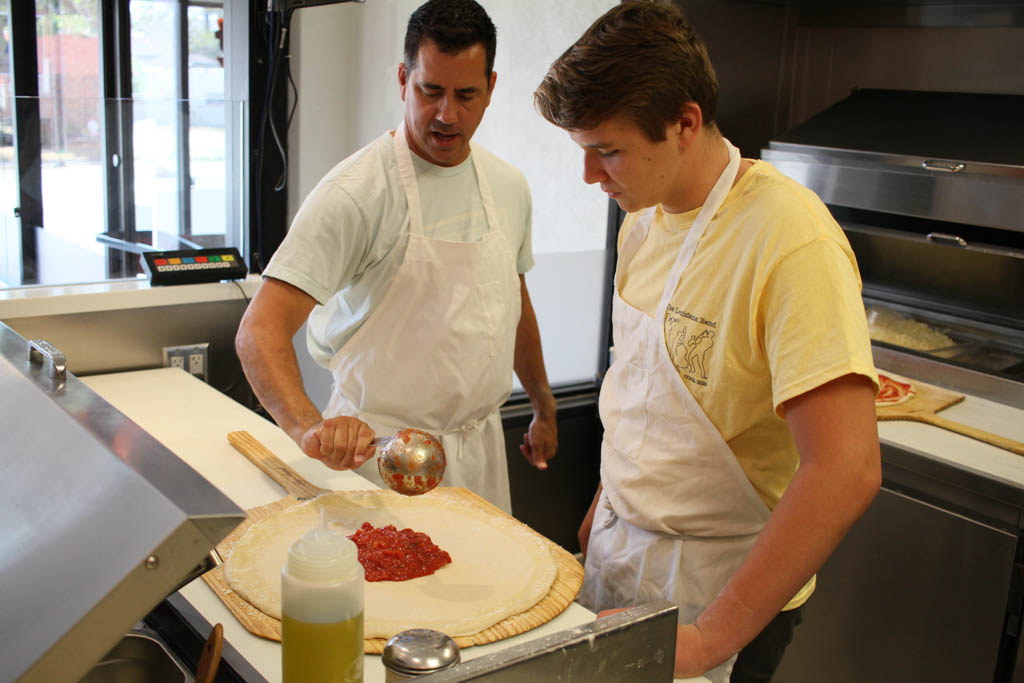 A David Bowie song plays as the smell of fresh garlic and dough wafts through the air. Brightly colored wall decals and sparkling-clean floors create a modern, yet comforting environment. The atmosphere at Tomato Pie Pizza Joint is no accident — proprietor Garrett Policastro meticulously crafted the ambiance of his restaurant with an attention to detail that translates to his award-winning pizza.

Garrett grew up in New York City eating cuts of the city’s signature pizza. When he came to Southern California to study architecture, he could not find the thin crust slices he knew and loved. Policastro decided to leave school and go back to the East coast to learn the art of pizza making from his uncles. After two years of working behind the scenes in New York pizzerias, he moved back to California and opened his first restaurant, a modest 500 square foot space called Tomato Pie Pizza Joint. When GQ food writer Alan Rickman named Tomato Pie Pizza Joint one of the ten best pizzas in America in 2009, the hole in the wall had lines out the door.

We were given the opportunity to take a look at the inner workings of the South Pasadena eatery and receive a pizza-making lesson from Policastro himself. Neither of us had any experience in the art of pizza cooking outside of heating up frozen pies, so we had a lot to learn.

Garrett gave us a demonstration of the process his chefs go through with each pizza. The sauce on each pizza is measured and spread to an exact proportion to maintain consistency between slices. The dough is made using water processed in-house that closely mimics the pH levels in New York City to emulate authentic crust. These small touches add up to an unpretentious, dependable pizza that is often impossible to find in Los Angeles.

Tomato Pie’s assembly process efficiently creates a quality product. The dough is delicately spread by hand, tossed it in the air and thrown gracefully from one hand to the other. The two of us were not quite experienced enough for this portion and a pie was lost through our attempt. After the dough is stretched, cheese is applied and toppings are added. We learned that this process is a constant balancing act of moisture — too much tomato or pineapple will make the pizza too moist. The pizza is then put in a high quality “Marcel” oven where it bakes for 6-10 minutes.

The result is a perfectly formulated pizza with just the right amount of everything. Thin, airy, and crunchy crust, sweet and flavorful sauce, and just-gooey-enough cheese. It’s a product of passion for a craft, the consequence of painstaking attention to detail and authenticity. LA is not a city known for its pizza, which is exactly what makes Tomato Pie Pizza Joint so great: it brings the flavors, methods, and philosophies of New York pizza to the West Coast.