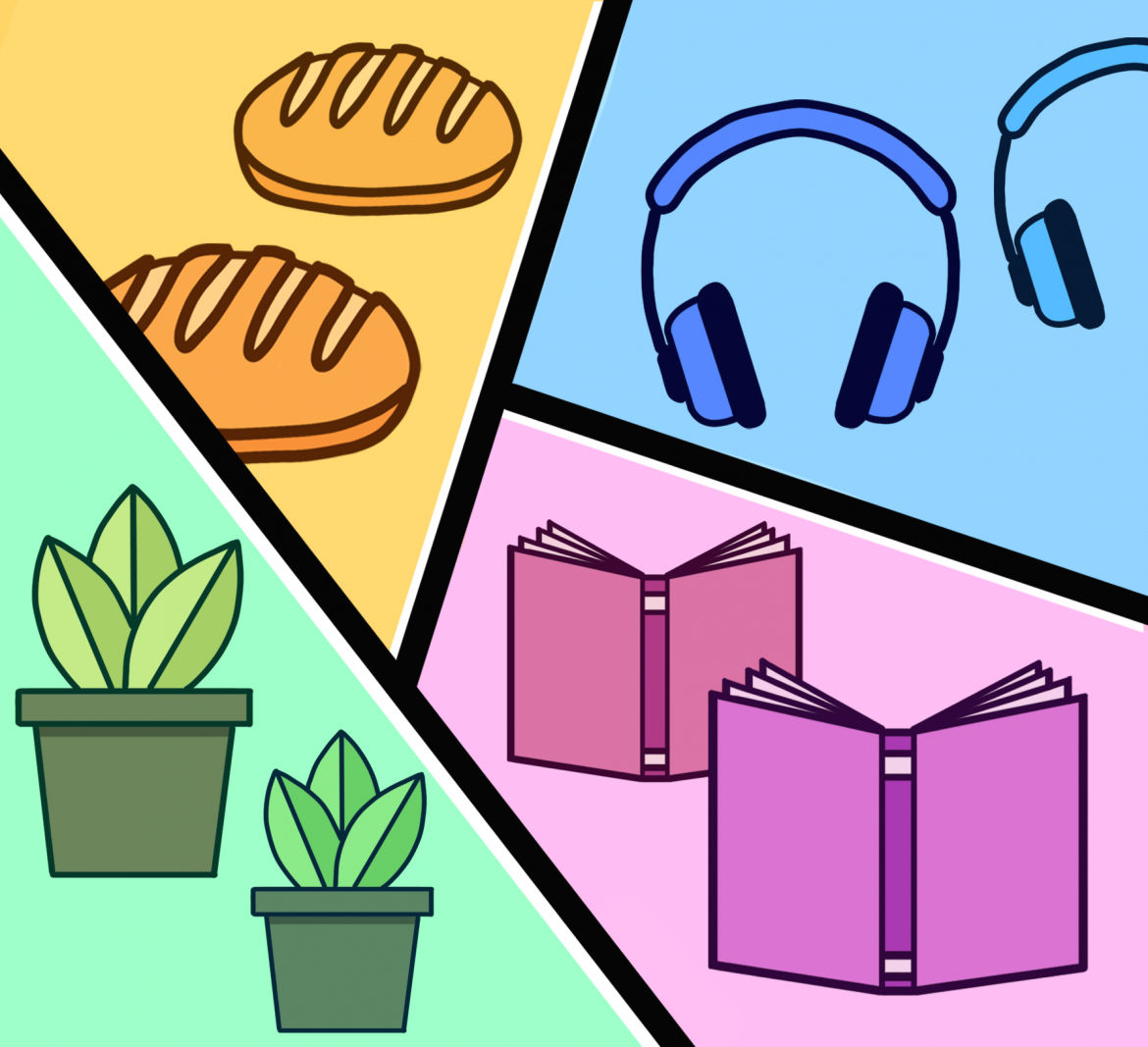 With the stay at home orders in place, people have taken to adopting creative ways to spend their time. Here are some ways Tiger's staff has been staying busy.

With the stay at home orders in place, people have taken to adopting creative ways to spend their time. Here are some ways Tiger‘s staff has been staying busy.

Gardening
Gardening is a task people should take advantage of, especially during this time of panic. Before the coronavirus outbreak, most students were preoccupied with their academics while parents worried about work. For many people, the backyard was the last thing on their mind; the soil began to dry up, the flowers wilted, and the aesthetic of people’s houses — judged by their gardens, lawns, and appearance — diminished.

But now that everyone is locked up, many yearn for the outdoors. Now is the perfect time to plant flowers, vegetables, and trees to bring back the functionalities of a backyard; it can once again blossom with flowers and become supplemented with a variety of food.

South Pas’ local grocery shop, Trader Joe’s, has been on a dwindling supply of food. As the clock hits noon, the counters are emptied with only one can of soup left. Many stores have followed suit, as customers swarm in and hoard items into their carts.

To avoid this, gardening edible plants is a perfect solution that incorporates nature, home, and food. Instead of wandering out to buy celery or carrots, one can simply head out to gather the desired plants. Put on some gloves and take a look outside. It’s the right time to enjoy the revitalizing sun and the smell of soil.

Cooking
Cooking is an essential life skill that can benefit anyone. Whether it is to prepare for those bleak days ahead in college or to save costs on food on a weekly basis, this quarantined period is the perfect time to sharpen those knives and dust those wooden cutting boards. Anybody can either take existing recipes to cook or improvise, making sure in the meantime to use up all the ingredients around the kitchen with close expiration dates!

Sourdough bread baking in particular is one excellent cooking adventure. Since grocery shopping is currently difficult and there are numerous shortages in available ingredients, sourdough recipes are perfect because they only require a few ingredients like flour and salt. One has to first begin a sourdough starter — a fermented batter that is equal parts of flour and water — which is later added in the baking process to act as a leavener and provide the distinct “sour” flavor of the bread.

With practice, these loaves will come out of the ovens looking more perfect each time. Once the flavor and texture is consistent, one could also begin to experiment with scoring. Sourdough breads require a shallow slash to be made at the center before baking, which allows for steam to escape and the dough to expand in the oven. But these scores can truly be slashed in any pattern one wishes. Unique patterns like leaves, stars, and swirls have been attempted by bakers everywhere, producing an end result that is as visually pleasing as it is delicious.

Of course, success is not always a guarantee; despite consistent effort, failure can come aplenty with these culinary endeavors. So while honing your baking skills, make sure to order takeout as well!  Local restaurants and businesses have taken hard hits amid this pandemic and are facing dire financial straits. As a result, it is imperative that the community supports and extends a hand toward the restaurant industry.

Desert Island Discs
BBC Radio’s interview show Desert Island Discs has a simple premise: the week’s guest, or castaway, shares eight recordings, one book, and one luxury item to bring with them if they were stranded on a desert island. Celebrities share their favorite tracks and the nostalgia behind each one. The show has been running since 1942 and has been hailed as one of the greatest and most cherished radio programs ever.

For most listeners, the program is a place for good music suggestions, as well as a glimpse into the lives of some of their favorite celebrities. In a recent episode aired on Mar. 15, Daniel Radcliffe went on Desert Island Discs to talk about his legacy as Harry Potter and its resulting effect on his Broadway and West End careers. Some of his chosen discs included “Bring Me Sunshine” by Morecambe and Wise, “Where Is My Mind” by the Pixies, and “Into My Arms” by Nick Cave. As listeners scroll through the thousands of available episodes, they’ll see more familiar names such as Lin Manuel-Miranda, Billie Jean King, Tom Hanks, and Ed Sheeran.

The show has since evolved from a program about music to a program about life. Its theme of isolation is more prevalent now than ever, but Desert Island Discs reminds its audience that music can carry the warmth of others. In social distancing and self-quarantining, music is a comfort that we are lucky to still have.

Art of Fictions
Let’s set a scene. You put on a record, sophisticated jazz of course. A mug of very bitter black coffee is by your side. You lean back in your leather winged armchair to ponder life, death and entropy. There’s one question that you just can’t answer. What should I read? What could possibly match the level of pretentiousness I’ve already achieved? Well, quarantined reader, Tiger has an answer for you: The Paris Review’s Art of Fictions.

Art of Fictions is a bit of a Paris Review (a literary magazine founded in 1953) tradition. Writers sit other prolific writers down for intimate conversations about their craft, the likes of which include poet William Carlos Williams, journalist and essayist Joan Didion, and novelist Elena Ferrante. The product is an unscripted glimpse into the minds of brilliant working writers.

Whether you’re a writer, a reader, or just curious, the Art of Fictions are remarkably insightful. They can be tougher, denser reads, but are well worth the effort. So, perch your horn-rimmed glasses on the tip of your nose, and get reading.

Tigertail
Not to be confused with the hit reality show Tiger King, Writer/Director Alan Yang’s Tigertail  tells a much different story about Pin-Jui (Tzi Ma), an immigrant who journeys to the U.S. from Taiwan, and his relationship with his daughter, Angela (Christine Ko). The movie is told through frequent flashbacks of Pin-Jui as a young, passionate adult (played by Hong-Chi Lee) which contrast the stoic, detached character of Ma as the older Pin-Jui.

Tigertail paints an immigrant’s American Dream in a very honest picture. Pin-Jui is forced to make physical and emotional sacrifices to pursue his dream across the Pacific. He begins the movie as a romantic, charismatic adult in Taiwan but grows to be a father that has trouble carrying a conversation with his daughter as his older, present day self.

Everything in Tigertail is depicted in a very authentic and subtle way, from the simple camera shots and transitions to the very authentic plot that has no big hollywood ending or dramatic twists. Despite this, the small, simple scenes with little dialogue between Pin-Jui and Angela speak volumes to their broken relationship and also provide full multiple touching scenes that will leave you shedding a tear.

Unlike many other movies being released on streaming platforms during the coronavirus lockdown, Tigertail was released for no additional fee on Netflix on Apr. 10.

The New Abnormal
The Strokes’ newest release, The New Abnormal, is a triumphant addition to the band’s discography. “Hit or miss” is what best describes The Strokes’ 19 year musical career. So, The New Abnormal’s consistency is no less than remarkable. The nine track album is short but sweet. An earlier garage punk revival approach and their newer mellow instrumental-heavy sound blend seamlessly in an album that sustains itself from strong beginning to strong finish.

A fun bassline and peppy drum beat open the first and best track “The Adults are Talking.” Julian Casablancas sings the rebellious, corruption condemning lyrics in both a low mutter and a wild falsetto. The right amount of dissonant static allows an otherwise angry and frustrated song a warmer, more intimate dimension.

The last song on The New Abnormal slows it way down. An almost haunting keyboard and synth pattern guides “Ode to the Mets,” a tribute to New York, where the band got their start. Casablancas says “drums please” and the song swells. It is not only a literal reflection of The Strokes’ career, it’s a stylistic one. The song is effortlessly cool and larger than life all at once. It affirms the quiet hope that has been building since the first track. The Strokes haven’t lost what they had 20 years ago in their stunning debut Is This It?. We have not seen the last of them.