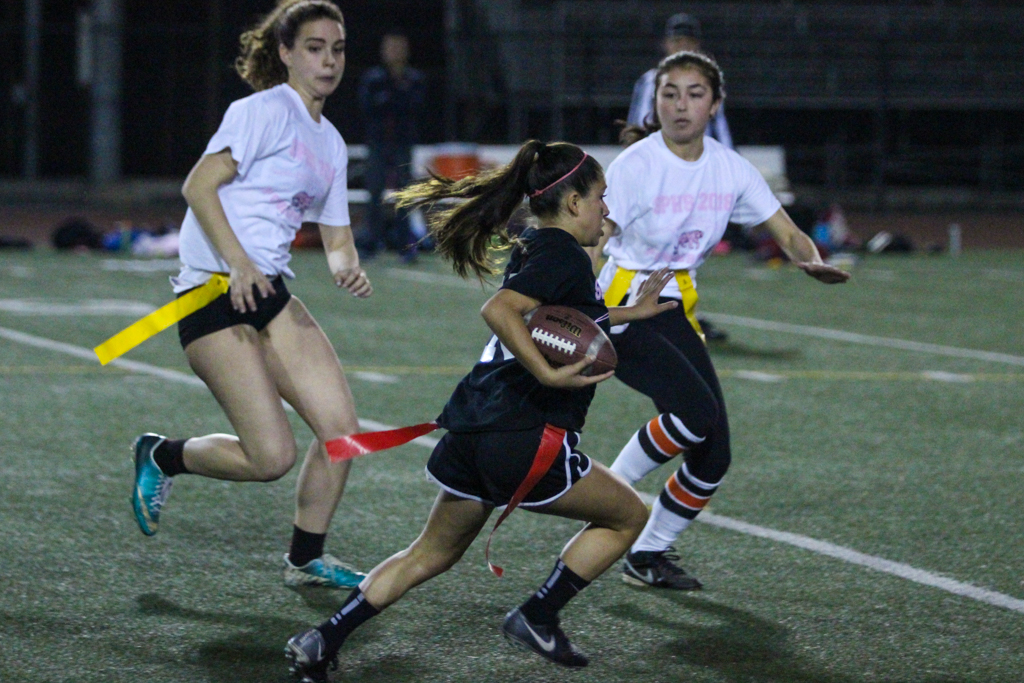 The senior class triumphed 44-12 in the annual PowderPuff game on Friday, March 9, as senior Riley Segal led her team with four touchdowns. With the yearly festivities underway, the senior and junior classes took to the Roosevelt field vying to win the title for their grade.

The two teams took little time acclimating to the tense game conditions, as Segal led her team down the field, running the ball into the endzone for an early 6-0 lead. The juniors responded soon after, when junior Rainey Tilley darted into the endzone following an excellently designed outside run play. The teams often relied on trickery, with dizzying reverses which yielded big plays.

With momentum in the balance, the two teams exchanged blows as Tilley and junior Uma Hornish attempted to keep their class in striking distance. Senior Maya Martinez helped to create separation with a long touchdown that increased the lead for the seniors. With the juniors threatening to develop momentum, senior Ashley Rusch held down the her team’s opportunistic defense with a clutch interception to turn over possession. After a high scoring first half, the team’s went to halftime with the senior class leading 26-12.

As per tradition, the “man-leaders” started out the halftime show with a medley performance consisting of flag tricks and lively dance moves. Fan favorite man-leader senior Nolan Kim closed out the performance with a series of flips and tricks, sending the crowd into a frenzy. The sophomores and freshmen were also included in the festivities. As a continuation from the morning’s assembly, sophomores Evan Kowal and Jewel Nguyen and freshmen Macie Lukavsky and Erin Soo participated in a spoon and egg race.

As the second half opened, the seniors continued to build on their seemingly untouchable lead. Junior defensive standouts Kimi Brown, Ashley King and Abbie Luvasky provided persistent pressure on the seniors, despite struggling to contain Segal in the pocket. Ultimately, the Class of 2018’s defense was superior, keeping their adversary scoreless in the second half. Segal scored twice more, as her class rolled to a victory.

For more coverage on PowderPuff check out Tiger Newspaper’s March Issue, which will be distributed on Tuesday March 13.