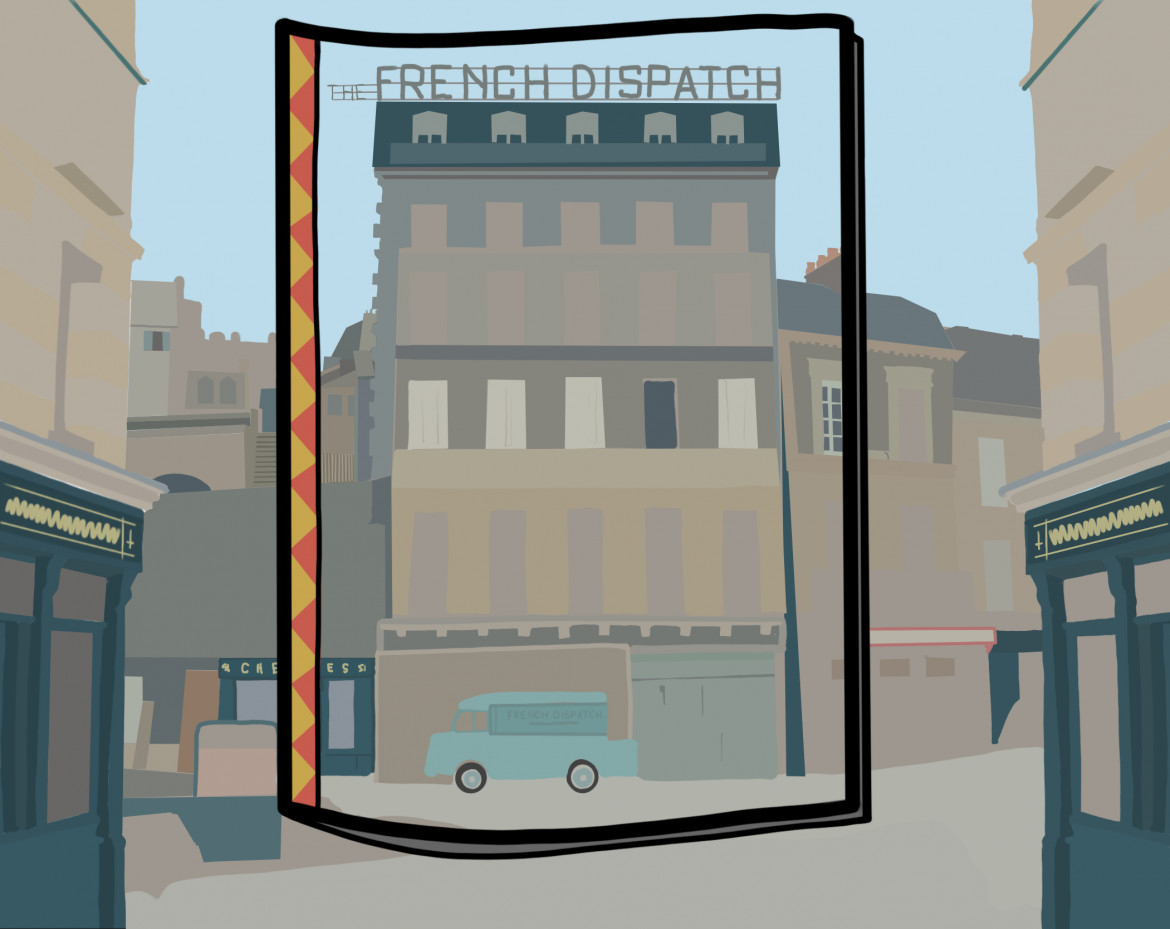 Director Wes Anderson presents an ode to journalism in a series of self-contained vignettes.

Since 1996, director Wes Anderson’s singular style has skyrocketed him to the king of eccentric and fascinating films. His tenth venture, The French Dispatch, is no exception. The production fulfilled Wes’s signature flair with wit and style, but the lack of a coherent plot led to the film’s fragmented feel. Altogether, Wes Anderson’s The French Dispatch is disjointed, but still charming.

Arthur Howitzer Jr. (Bill Murray) was the editor of the French Dispatch newspaper, a supplement to his hometown Liberty, Kansas’ paper, before he died of a heart attack. In accordance with his will, the Dispatch publication will suspend following a farewell issue where the newspaper republishes three past articles.

The three republished stories of the intrepid journalists in Ennui, France, unfold in an anthological series of vignettes in a three-act structure. These vignettes include three unrelated stories only connected by the setting and the newspaper for which they write. Anthology works on television usually function due to multi-episode arcs to flesh out the characters; a film does not have this luxury. This creates the film’s disjointed nature.

A brief vignette from a travel editor (Owen Wilson) begins the tale, but this 20-minute scene is pure exposition and background. In brief, Ennui, France, is a small town filled with streetwalkers and neighborhood boys stirring up trouble. The phrase ‘ennui’ means a lack of excitement, and it is quite ironic that the action transpires here because the film is anything but boring, although occasionally uninspired.

After the travel editor’s spiel, the first official act commences. A title card appears onscreen with the words “Concrete Masterpiece.” The name is quite apropos because this was the wittiest of the three sections. JKL Berenson (Tilda Swinton and her magnificent transatlantic accent) gives a detailed account of the life of the convicted criminal Moses Rosenthaler (Benicio Del Toro). In addition to being a convicted murderer, Rosenthaler is also an avid painter whose muse is his correctional officer (Lea Seydoux). A fellow prisoner convicted of tax evasion, Julien Cadazio (Adrien Brody), likes Rosenthaler’s modern art and becomes the financier.

This section works so well due to the perfect combination of heart and wit. Anderson’s flowery language is at its most understated and poignant. Brody’s Cadazio gives the best performance in the film with perfect deadpan and clever wisecracks about the absurdity of modern art.

When the first part ended, it quickly switched to ‘Revisions to a Manifesto.’ As the title suggests, this section contains an uprising, copy editing, and a manifesto.

The plot of this section is arguably the most amusing but quickly gets muddled due to extraneous information. Lucinda Krementz (Frances McDormand) profiles a ragtag group of French revolutionaries led by Zefferelli (Timothee Chalamet). The revolution predicated on boys wanting to go into the girl’s dormitory. That premise is funny, but it’s never expanded. Instead, drawn-out chess games with foreign leaders abound. Additionally, a romance between Zefferelli and Krementz provides an odd comedic moment. Unfortunately, Timothee Chalamet seems filled with ennui himself and not on par with the Wes Anderson absurdist comedy.

Part Three’s “Private Dining Room of the Police Commissioner” was a fast-paced acting masterclass from Jeffrey Wright. Similar to Part One, this section included both humanity and a comic chase sequence. Roebuck Wright (Jeffrey Wright) recounts his experience having dinner with The Commissaire of the Ennui police force, prepared by legendary police officer-slash-chef multihyphenate Lt. Nescaffier (Stephen Park) during a 1970s aesthetic television interview. When the son of the commissioner of the police force gets kidnapped, a high-octane search commences.

Jeffrey Wright’s committed performance imbued his flowery language with heart and humanity, especially his discussions of feeling like an outsider. Roebuck is a gay, Black man in a time when discussions of queer topics were still taboo. He bonds with Lt. Nescaffier,an Asian chef who constantly feels the need to prove himself.

All of the sections are self-contained stories that do not interweave to form a cohesive structure. This inconsistency contributes to both the strength and problems with the film. The accounts provide for individual character development and provide color but contribute little to the overarching story of a small-town newspaper. Nevertheless, the charm and Wes Anderson’s attention to detail almost makes up for the irregular storytelling.