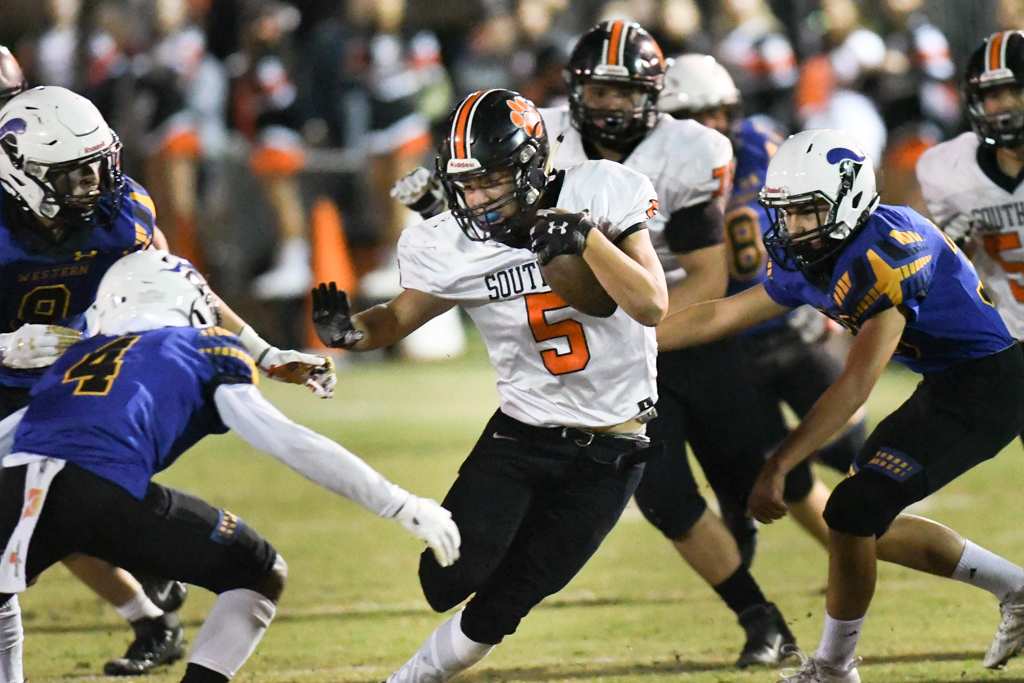 Football took its momentous CIF run to Western Christian’s Field on Friday, Nov. 12 in hopes of advancing to Division 13 semifinals, and they did just that. In a game that senior Jack Riffle described as “our best [game] yet,” the Tigers put up 49 points while surrendering only 6.

South Pas’ defense built off its commanding effort last week against Magnolia, and the offense led by senior quarterback Noah Aragon was elevated by a college offer this past week. For the first time since 1977, football advanced to CIF semifinals.

On the opening kickoff, a train barreled past the field and the Tiger faithful embraced it as a good omen. The Tigers scored on their first drive and would never look back. J. Riffle and senior Alex Gonzales set the tone with a strong running game, taking the Tigers down to the one-yard line. Aragon dived into the end zone a play later, giving South Pas the 7-0 edge.

On the first drive of the game for Western Christian and the very next play, junior Quinn Sterling forced a Lancers fumble and sophomore Devin Robinson recovered the ball. In what would be a microcosm of the game, the Tigers scored a touchdown and forced a fumble on consecutive plays.

Backed up at third & 15 deep in Lancer territory on their next drive, the Tigers utilized Aragon’s legs. He split defenders to scramble for 20 yards and a first down. A few plays later, J. Riffle scored the second Tiger touchdown of the game. The score stood at 14-0. 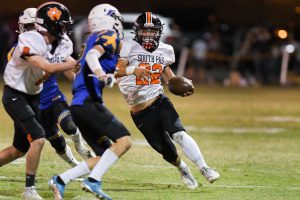 The Tiger’s defense bent but didn’t break once the Lancers got the ball back. After Western Christian connected on multiple fourth down conversions, senior Sage Wayans and sophomore Luke Riffle put an end to any comeback attempt with lockdown defense. The Lancers would turn the ball over on downs.

South Pas wasn’t satisfied with a two-touchdown lead, once more leaning on its unstoppable running game for another touchdown. Gonzales set it up with a 40-yard effort, and J. Riffle took it to the pylon to extend the lead to 21-0 midway through the second quarter.

L. Riffle picked off a Lancers pass in the end zone, leaping above the receiver to intercept the ball and setting up his brother J. Riffle on another Tiger drive. Senior Grant Huntley was on the receiving end of a 40-yard Aragon spiral, and South Pas let J. Riffle complete his hat trick of touchdowns on the next play. Dodging defenders into the end zone, J. Riffle had single-handedly accumulated the same number of touchdowns in the first half than the Lancers had first downs.

Western Christian got their first points of the game on a deep touchdown before the half, but the Tigers responded with a deep touchdown of their own by showing off the Aragon/Huntley connection. A dominating first-half performance by South Pas had the scoreboard at 35-6.

“Everything was clicking tonight,” J. Riffle said. “Our defense racked up four interceptions, our offense scored pretty much every time, this is the best game we’ve ever played and I still think we can improve.”

Western Christian tried to instill a little uneasiness in the Tiger fans to start the third quarter, completing multiple 30+ yard passes, but L. Riffle had other ideas and decided to pick off his second pass of the game. Sophomore Isaiah Hyun got in on the action with an interception of his own in the third quarter, and senior Jaden Castellon added another just for good measure. 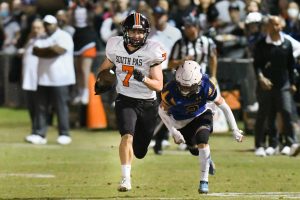 J. Riffle scored his fourth touchdown of the game in the waning minutes of the third, and sophomore Jason Hong showcased his talents with a rushing touchdown. With the score so unbalanced, the clock wouldn’t stop the entire second half and the team didn’t have to wait long to dump water on head coach Jeff Chi in celebration.

The Alma Mater sounded just that much sweeter being played for the first time after a CIF quarterfinals win in 44 years.

From freshman James Dowd to sophomore Luke Riffle to junior Quinn Sterling and seniors Noah Aragon and Jack Riffle, everybody contributed to a spectacular victory.

“We’re peaking at the right time,” head coach Jeff Chi said. “We’re gonna continue to emphasize that, continue to work hard towards next game, and hopefully we’ll come out with a win and bring the championship game back to South Pasadena.”

The South Pasadena Football record books need to be updated, once again. Next on the schedule for South Pas is a CIF semifinal game on the road against the Montclair Cavaliers on Friday, Nov. 19.