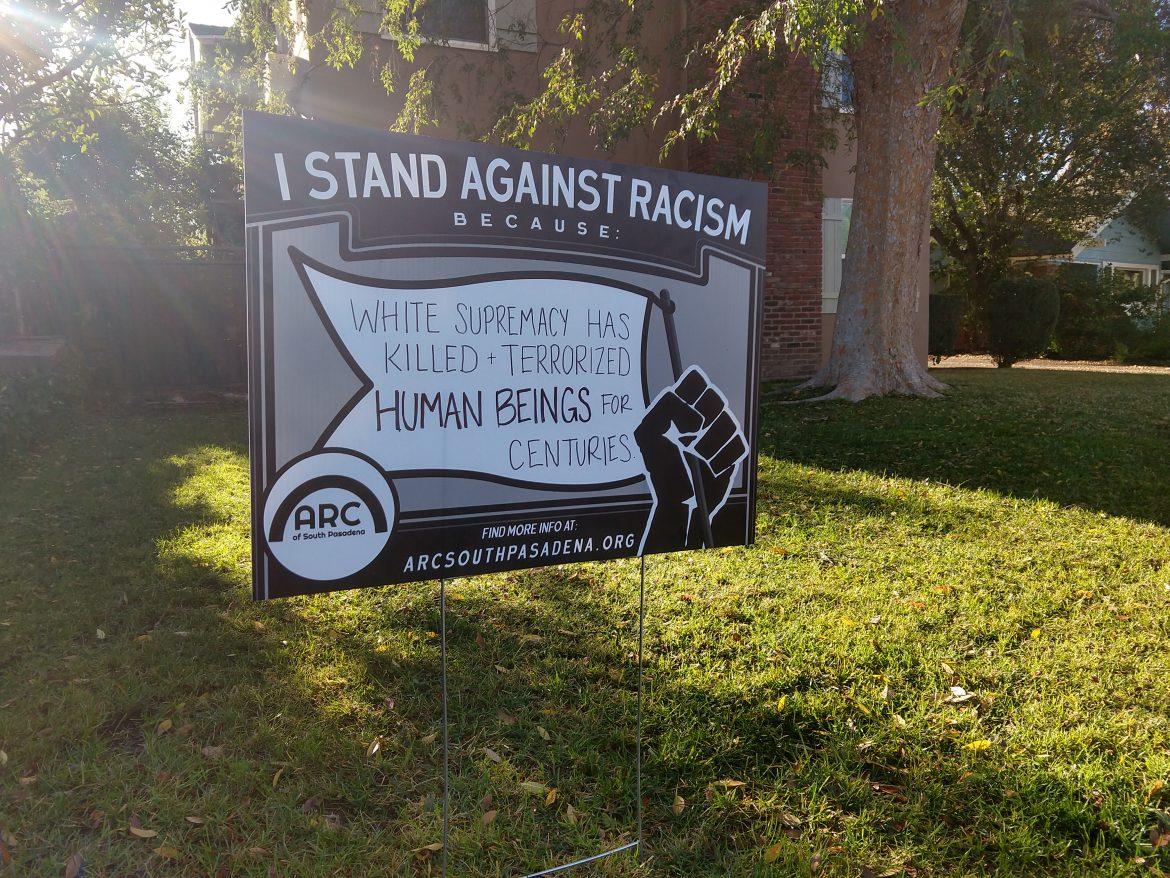 Interactive anti-racist lawn signs were distributed to the community by the ARC in time for Inauguration Day.

Photo by Will Hoadley-Brill
Contributor

Since its inception, the South Pasadena Anti-Racism Committee (ARC) has dedicated itself to dismantling racism within the city through grassroots organizing in government, education, public safety, and the arts.

This past year, the ARC worked with Care First and Black Lives Matter (BLM) South Pasadena to host holiday donation drives for unhoused community members. Recent activities include the Yard Sign Project, where ARC members distributed special yard signs prior to Inauguration Day for community members to fill in the statement, “I Stand Against Racism Because…”

Residents formed the ARC in June 2020 amidst national and local BLM protests in order to enact anti-racist change in South Pasadena.

“Many of us, after the killings of George Floyd, Ahmaud Arbery, and Breonna Taylor, were galvanized to confront structural racism,” ARC founding member Phung Huynh said. “I’ve always known about South Pasadena’s racist past, and this felt like the perfect opportunity to confront it head-on.”

The approximately 60-member organization fights against racism with a multi-pronged approach by dividing itself into four task forces, bringing together people with varied backgrounds and skills.

“We all had different ways we wanted to attack [racism], but we found that the best way is to do it collaboratively. That’s the structure of the organization,” Huynh said. “It’s deeply listening to our members and community and working together — not being monolithic about it.”

The Education Task Force, led by Stefani Williams, works with groups like SPHS’ Anti-Bias Club to encourage inclusivity training on campus. Under the leadership of Will Hoadley-Brill, the Storytelling Task Force compiled research on South Pasadena’s racist history for public viewing on the ARC’s website.

The fourth task force — led by Huynh — is focused on Public Safety, advocating for implicit-bias training in the SPPD and for the next police chief to be a woman or person of color. Community members had criticized former Chief Joe Ortiz and his department for discrimination against marginalized groups.

The group welcomes new members, and those interested in joining can do so on the ARC website. There are also weekly Welcome Mat Meetups where community members can learn more about the ARC and connect with other anti-racist residents.

The ARC is collaborating with the non-profit Peace Over Violence to host an educational workshop on domestic violence on Thursday, Feb. 11.