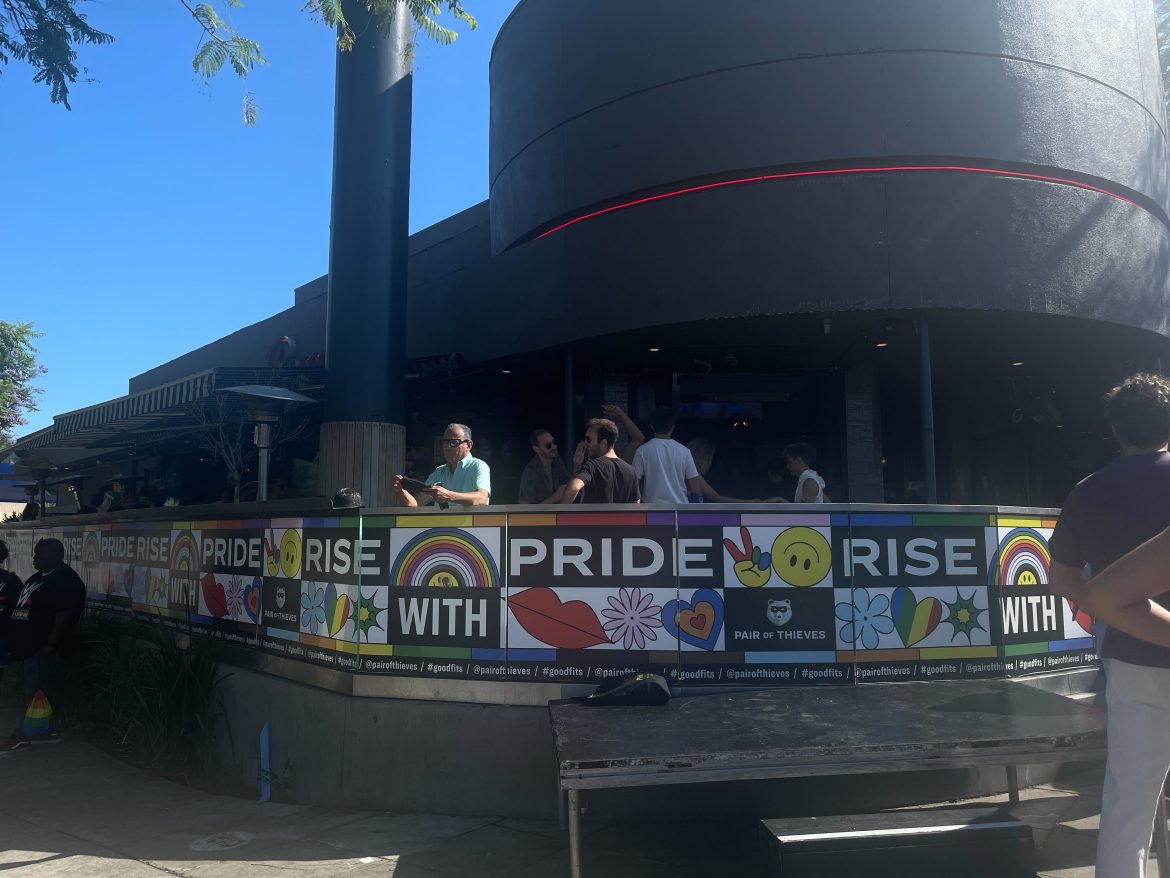 The Los Angeles LGBTQ+ community flocked to West Hollywood to celebrate the 50th anniversary of the first Pride parade.

Pastel colored flags, floats and people crowded the streets of Los Angeles in celebration of Pride month. The Los Angeles’ Pride Parade occurred throughout the weekend of June 11, with attendees congregating after two years of the pandemic to celebrate the 50th anniversary of the first pride parade. While the day before featured a paid event called “LA Pride in the Park” with headliners such as Christina Aguilera and Bob the Drag Queen, I decided to only partake in the parade the following day.

My friend and I made the long and hectic drive through Los Angeles traffic to West Hollywood greeted by waving pride flags . With pedestrians gathering and lining the streets to enjoy the parade, we took our place alongside a group of young men in booty shorts holding fans.

This year the parade was adorned with many eye-catching floats from incongruous corporations to local organizations following the central theme of “#LoveYourPride.” I was taken aback by the many local organizations that came together to create floats and parade throughout the streets. Much of the audience seemed to be in large support for the many Los Angeles-based floats. My favorite float of the parade was the Gay Men’s Chorus of Los Angeles, featuring a chorus of men in coordinating white and baby blue outfits skipping through the streets and singing.

TikTok, which was a shockingly large contributor and donor to the parade, had a featured float adorned with bright colors of the rainbow, an exasperating amount of fringe, ABBA, and multiple LGBTQ+ TikTokers waving at the spectators. It was quite jarring to see such a large corporation, especially one that has had controversies regarding shadowbanning and banning LGBTQ+ creators in the past, being a sponsor for the event. It seemed that no matter where you looked, from floats to advertisements, TikTok was branded. However, TikTok was able to successfully promote the event, through hosting the event by supporting local businesses and properly representing the community.

The parade went on with more floats taking up the streets of West Hollywood. There was a unique sense of flamboyancy cultivated by a community uniting for decades under activist ideals and in celebration of that community’s history. The celebration is a reminder of both the oppression and unity that the LGBTQ+ community has undergone. From the Black Cat Tavern raid, in which the community resisted a local police raid in Silver Lake, to the first Supreme Court case, One Inc. v. Olsen, establishing that homosexuality in media was not considered obscene, both of which occurred within the Los Angeles area. While most people know of the Stonewall Riots as the catalyst in the fight for the rights of the community, it is nice to see the community in Los Angeles come together and celebrate activism that has been occurring in our streets since the 50s.

Decorated with rainbows, flowers, and gay icons such as Paula Abdul, the identity of Pride came together to showcase individualism, breaking the status quo, and represent the stance of LGBTQ+ Americans in society today. These ideas that represent the identity and foundation of Pride were presented through the many bright and colorful outfits, heavy eyeliner plus eyeshadow makeup looks, and accessories adorned by each attendee; simple items when they are alone but able to become a part of someone’s unique identity when combined. Others were similarly able to express their own identities by curating outfits tailored to their own perspectives and likeliness.

After the festivities of the Pride Parade, we roamed the streets of West Hollywood in search of “after-Pride” festivities. Besides the planned events such as a Pride Farmer’s Market and dancing, many people wanted to continue the bright and prideful atmosphere from the parade. Eventually, we settled on a restaurant, Kitchen24, after hearing the beginning beats to P!NK’s iconic “Raise Your Glass”. The hostess guided us to our table as a playlist of iconic drag brunch songs blared while the lively energy from the end of the parade still emanated. We sat in between two groups: a couple that had finished dining and were taking pictures that were definitely for Instagram and a group of three men who were cheering every time Chris Pratt showed up on the television screen during Jurassic World. The restaurant, serving mainly brunch foods, overflowed with the sounds of squealing and conversation.

We walked through the historic West Hollywood district, noticing that acclaimed LGBTQ+ buildings such as Hamburger Mary’s, Rocco’s, and The Abbey featured people dancing to remixes of Dua Lipa and Doja Cat with the audience cheering to several performances from dancers and local drag queens. These buildings hold fragments of LGBTQ+ history through their prior activism and have since become famous communal spots for LGBTQ+ Californians to converge and socialize. Being some of the first few buildings and businesses that catered directly to the community, a majority of these buildings have been revamped from the original to be brighter and more inviting while still maintaining elements of their history.

My senses felt overloaded as the 4:00 p.m. heat beat down on us and loud music blasted alongside jeers and cheers from audiences. With local businesses selling handmade pride merchandise with everything from flags and t-shirts to men in speedos dancing on platforms, the local community seemed to go all out for the weekend. The many cars driving by and honking in support only further solidified the engaging environment that was present for Pride. While passing several bars, we took in the music and watched on the sidewalk as a shark in a wig (aptly named Sharkquisha), for a lack of a better word, humped a drag queen to the cheers of the audience. Unique performances and events showcase the individuality and barrier breaking that the community has exemplified in the past, now in modern forms.

I found myself understanding more and more of the LGBTQ+ community and its culture. Attention and volume were necessary in the past to bring awareness and activism to our struggles, and this energy is still present today. The origins of Pride — the ability to come together and celebrate identity — are still at the forefront of the parade. Individuality is significant in opening the doors to the closet and showing the world that we, as a community, love our pride in new ways.