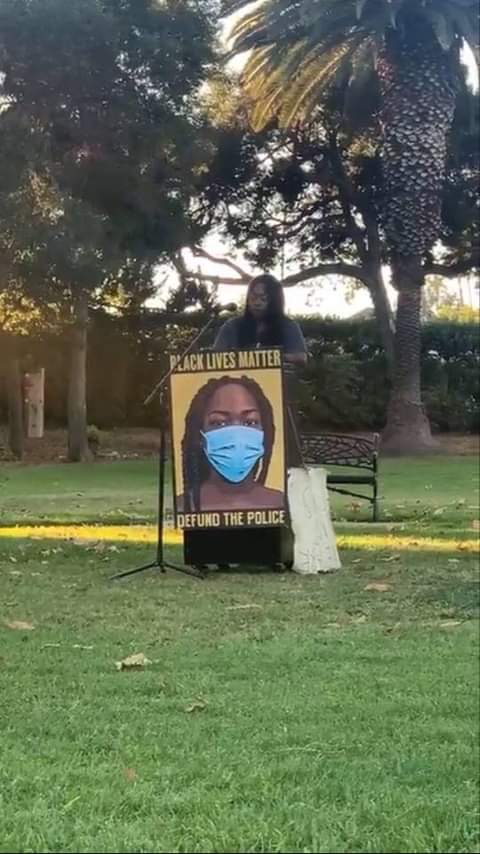 SPY4PR called attention to Richcreek’s assault of two protestors and how the SPPD mishandled the situation.

SPY4PR leader London Lang spoke first and explained that the protests were not anti-police, rather, they were advocating for anti-racist policing. Lang called for the SPPD to discipline Corporal Randy Wise for his behavior as the arresting officer in the Richcreek case.

SPY4PR and other community members criticized the SPPD at a virtual community forum on policing for releasing Richcreek from police custody too quickly after he spat on two BLM protestors and later threw a rock at one of them. Residents also expressed outrage at inflammatory and biased language in the police report and the SPPD’s poor treatment of the victims.

“This was a disgusting hate crime committed towards two women in the midst of a pandemic, and it was caught on video,” Fahren James, one of the people Richcreek assaulted, said in a speech at the protest. “And you mean to tell me that no voluntary police report was filed?”

Jim DeSimone, James’ lawyer, called for Richcreek to be tried for a hate crime and stated that spitting on someone during a pandemic should be considered an act of domestic terror.

“We would like to see the city be far more responsive to cases like this, in which a hate crime was clearly committed and captured on video,” DeSimone said. “What is more disturbing is that even when Fahren offered to share her video evidence, she was just told to stand back.”

After James finished her speech at the park, the group of about 30 protesters marched to city hall, where Lang led the crowd in a series of chants for justice and called for more civilian oversight of the SPPD. Protestors demanded that the city council adopt an amendment to the charter for the South Pasadena Public Safety Commission, which would allow the commission to investigate acts of officer misconduct without the prior approval of the city manager. SPY4PR has also called for the full release of the SPPD’s arrest records from 2016 on, as they believe it may reveal a pattern of racially profiled arrests.

SPY4PR plans to continue protesting at noon on Tuesdays and Thursdays at the corner of Fair Oaks and Mission.