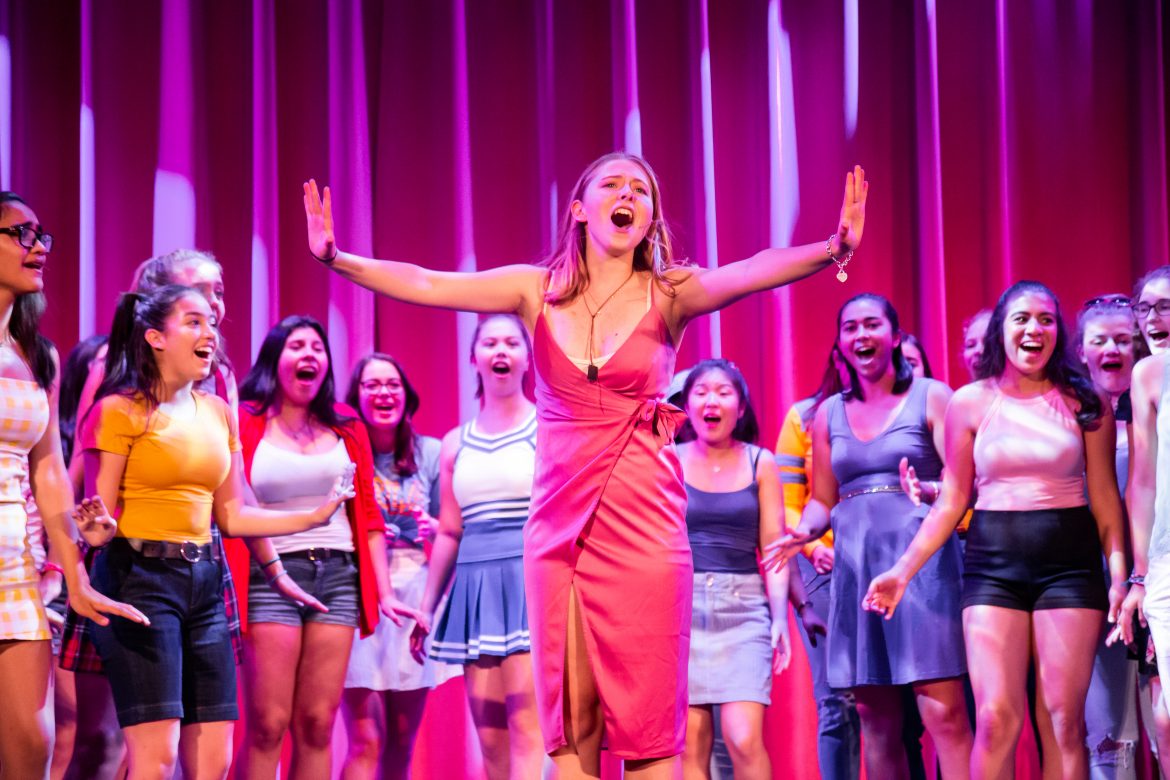 Senior Lindsey Calva thrives on performing. After four years in South Pasadena’s drama department, she has participated in numerous productions, covering roles in The Addams Family, Peter Pan, and Hairspray. However, even as a veteran actor, the demanding and high-energy role as Elle Woods in SPHS’ spring musical, Legally Blonde, has pushed Calva out of her comfort zone in both rehearsal and onstage.

“I [was] really nervous about doing this musical. I’ve never had a part this big in my life and I’ve never had a part so girly and young; I always play someone older or ‘the mother’ in the show,” Calva said. “I [was] also stressing about the vocals, I went from playing Morticia Addams to playing Elle Woods, who sings about an octave higher.”

The pressure of preparing for the show was no easier on the rest of the cast, who started rehearsals in early February each day after school. Director Mr. Nick Hoffa, Musical Director Ms Lia Jones, and Choreographer Ms Courtney Cheyne invested countless hours into practices to blend the acting, vocals, and choreography of each cast member together into a seamless narrative.

“It takes a lot of concentration and focus to pull it off,” Hoffa said. “For example, we have over 200 costume changes and some of them are extremely fast— it require[s] coordination from everyone to pull off.”

The stage crew was especially critical in SPHS’ Legally Blonde, where the limited number of sets available for the cast to use made it essential for the crew to make the most of lighting to bring more excitement into the musical. The high school’s sound equipment presented another challenge; the school’s poor set of microphones and last-minute technical errors caused the audio from the microphones to be unresponsive and crackly.

Meanwhile, the musical’s producers were challenged to find costumes and props for the show, which had to reflect the quirks and flair in each character, and be appropriate to the scene. Running on the musical’s tighter budget, the musical’s five producers were forced to be creative and resourceful with their materials. Many costumes came straight from the actors’ closets, while others were purchased on online stores after careful financial consideration.

The shows were the culmination of months of hard work. Despite the difficulties during their performances and earlier rehearsals, the students involved, whether first timers and veterans, were able to gain insight about their love for working on and around the stage.

“I learned about being myself on stage, there’s this quote ‘you are more interesting than the best actor you could ever be.’ I was authentically me while being Elle Woods on stage,” Calva said after her weekend performances. “Also, the efforts of everyone were astonishing: everything really came together in the end in ways we didn’t think would happen, it was a very surprising and magical experience.”