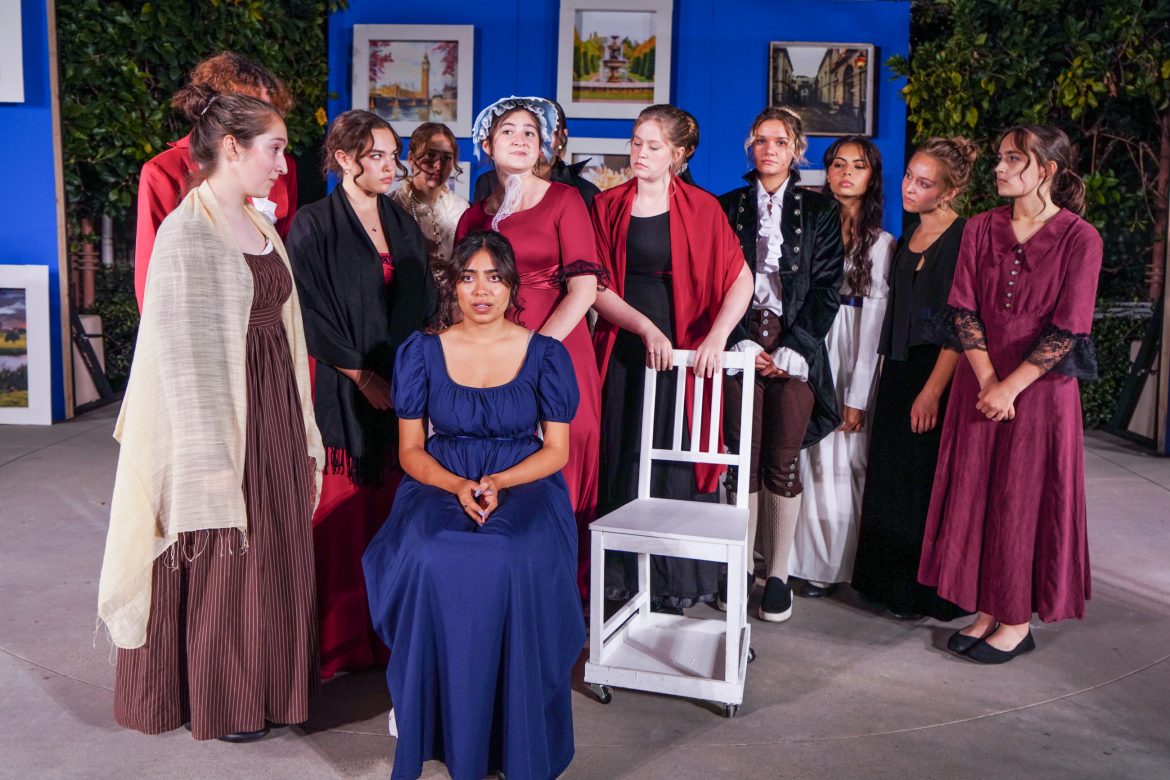 Under the direction of drama director Nick Hoffa, SPHS Drama’s rendition of Sense and Sensibility put a new twist on Jane Austen’s literary classic in its run from Friday, Nov. 12 to Sunday, Nov. 14 under the stars on the Tiger Patio. The smaller audience and concession stand that offered baked goods and blankets created a cozy atmosphere for the drama program’s first live performance in two years.

Set in the 1790s, Sense and Sensibility follows the Dashwood sisters Elinor, Marianne, and Margaret after the sudden loss of their father. Due to the laws of the time, their father’s inheritance is passed down to John, the son from Mr. Dashwood’s first marriage. The Dashwood women must find a new home and navigate a world of unfair norms and rules after they lose their home, their financial means, and risk losing their reputations.

The play, which was about two hours long, paid homage to the timeless Jane Austen novel while simultaneously providing an entirely new perspective. The addition of disco lights and George Michael’s “Careless Whisper” added modern humor and wit that separated the production from traditional renditions. Most actors were onstage throughout the play, even if they weren’t actively in the scene. Each cast member played a crucial role in bringing the story together, some by holding up a bed sheet to create a carriage, and some playing the horses that guided it.

In addition to the play’s humorous performances, the stage set-up was particularly inventive. With an entire set on wheels and constantly moving parts, the production does not have a single dull moment. Due to COVID restrictions, the stage was moved outside onto the Tiger patio, which caused a couple of obstacles to maneuver, including interruptions from the street and unpredictable weather. However, the stage crew did not disappoint. In the backdrop, framed sketches lit up to subtly but cleverly illustrate the setting of the scene. On top of this, each cast member constantly moved set pieces and chairs, which made each scene incredibly interactive and engaging for the audience.

“[Outside], you’re a part of the audience. You really feel connected to the whole production and the audience.” Senior Ava Page said. “It hasn’t been since Metamorphoses, my sophomore play, that I [have] performed in front of an audience for a school play, so this [was] absolutely incredible. It was a completely different experience, but the second I stepped on stage, I remembered exactly how it goes.”

The cast’s dynamic made this production of Sense and Sensibility incredibly special. Seniors Rena Pau and Ava Page outshone even Emma Thompson and Kate Winslet as Elinor and Marianne Dashwood. Senior Quinn Manzo stole the scene as both Fanny Dashwood and Colonel Brandon while Junior Veronica Koutsky balanced her role as a gossip and Lucy Steele. Each actor was completely immersed in their role and, in turn, so was the audience.

The unique depth of this SPHS production set it apart from previous shows. The ambient lights and the student-produced musical arrangement accompanied acting, singing, and a stunning set display. The professionalism on stage, the actors’ determination, and the exceptional setting outside left a lasting impression on the audience. Sense and Sensibility was truly one for the books.