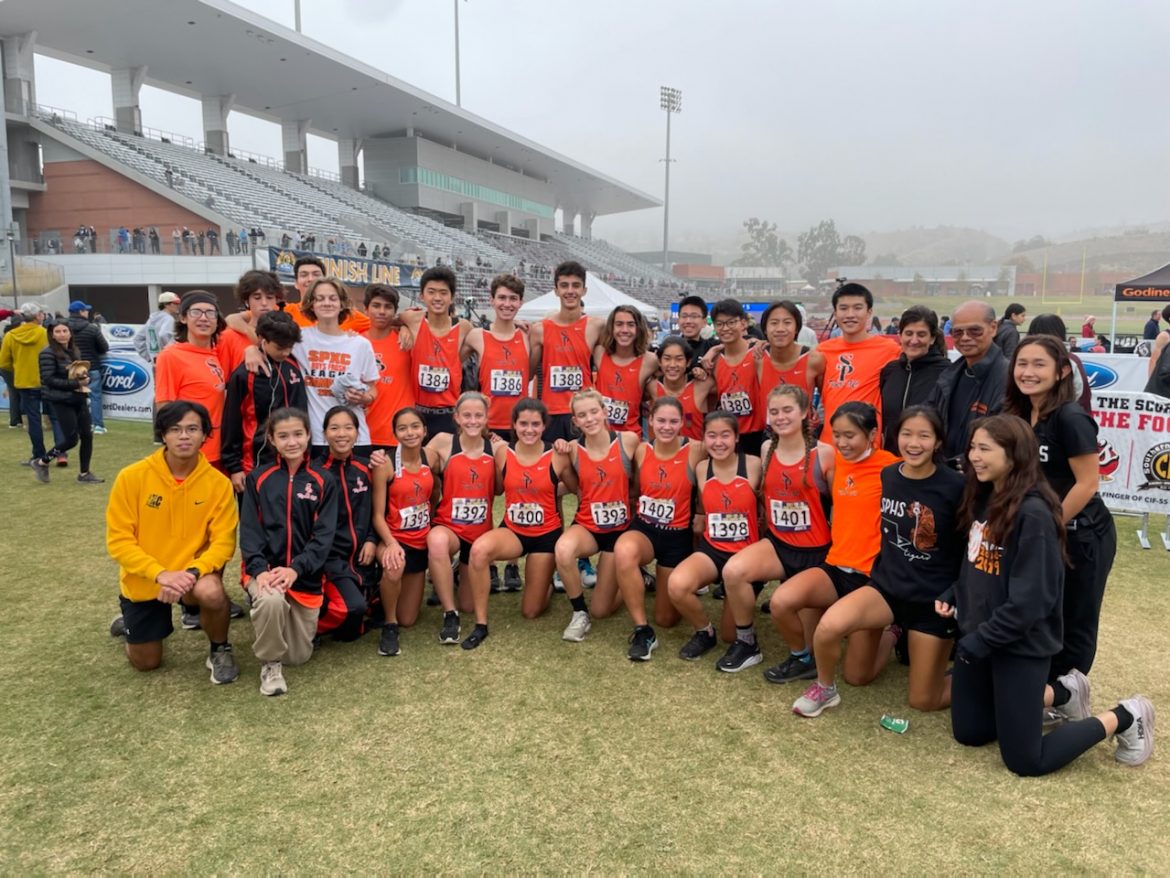 Unlike the hilly trails and obstacles they run, SPHS’ boys and girls cross country teams have sailed smoothly through the season into CIF. At CIF Finals on Saturday, Nov. 20, which the Tigers solidly qualified for after excelling at preliminaries on Friday, Nov. 12, the boys team placed seventh and the girls team placed fifth out of all the schools competing in the Division 4 race, which secured them both a spot at the State Championships for the fourth and first time ever, respectively.

Senior Brady Nakamura led his team with a time of 15:44, placing ninth. Following behind was fellow senior Liam De Villa, who placed 18th in 16:06. Juniors Jason Baek and Jack Ishibashi finished next in 16:35 and 17:23 and 38th and 76th, respectively. Sophomore Keeran Murray obtained 85th place finishing in 17:33. Right alongside him was senior Noah Kuhn who completed the race in 17:34, placing 86th.

“We were the last team to make State. The difference maker was our fifth man Keeran Murray who stepped up and filled in for one of our top scorers who was having a bad day,” Nakamura said. “It’s amazing to see how our work has paid off, and the depth we have on both of our Varsity squads.”

Per usual, senior Sydney Morrow led the girls team, completing the race in 18:22 and eighth place. Freshman Amelie Geofffron placed 31st, achieving a time of 19:17. Fellow freshmen Abigail Errington and Saidbh Byrne placed 42nd in 19:35 and 48th in 19:45, respectively. Seniors Gabriela Rodriguez and Kerrigan Riley placed 56th and 65th, with a time of 20:05 and  20:18, respectively.

Every round of CIF could be the teams’ last, but the Tigers have continued to prove themselves and make all the hard work they have put in this season pay off.

“If we didn’t qualify for state championships here, our season would be over. It could have been the last cross country race ever for some people. So, this was the race that every one of us had to give our all, and that’s exactly what we did,” Baek said. “We had to place within top seven places to make it to state as a team, and we clenched the last spot by a mere three points.”

“At the moment I found out we made it to state, I just let out what my coach would call a ‘primal scream.’ That was the best way to express my emotion,” Baek said. “Starting out this season, we weren’t even ranked to qualify for state, but as the season progressed, we proved ourselves to be at that level by putting in the work together. It’s really gratifying to see all our hard work pay off.”

The Tigers will travel up to Clovis, CA to run at the CIF State Championship meet on Saturday, Nov. 27, at Woodward Park.