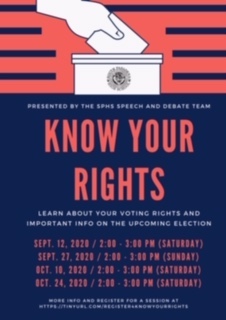 Each "Know Your Rights" session will highlight a different guest speaker experienced in government.

The SPHS Speech and Debate team held its first “Know Your Rights” session on Saturday, Sept. 12 to inform participants about their voting rights. The program covered voter suppression, the electoral college, how to vote, and also featured guest speaker Samuel Liu, Chief of Staff for California State Senator Ben Allen.

Seniors Haelee Kim and Nicole Lu designed the free sessions in collaboration with the Speech and Debate team to help people of all ages gain a deeper understanding of the importance of voting with emphasis on the upcoming election on Tuesday, Nov. 3. According to the New York Times, 37 percent of eligible voters in 2020 are Millennials or Gen Z, so Lu and Kim hoped to encourage more civic participation among young people through education.

“We wanted to make sure that information as important as this was not blocked by bearings such as costs,” Lu said. “Our entire program not only serves as a learning opportunity, but a resource readily available for the community at large.”

The Speech and Debate Team presented information on the systemic disenfranchising of Black voters and had participants take a shortened version of Alabama’s literacy test. The test was used to suppress political engagement using the Grandfather Clause to ensure that more Black voters had to take the test than white voters from 1895 to 1915.

Lu and fellow senior Thea McCallie then explained the Electoral College process, pointing out that to win the presidency, a candidate must win at least 270 out of 538 electoral votes. They also stated that with the exception of two states, the candidate who wins the popular statewide vote wins all of its electoral votes.

“I think the Electoral College is simply just a confusing system,” Lu said. “But it is crucial to understand the way our democracy works, especially since it determines the outcome of the Presidential Election this upcoming November.”

The presenters continued by teaching the participants how to preregister to vote online, in person, or by mail. Lu proceeded to communicate that all registered Californians will receive a mail-in ballot 31 days before the election and that it can be returned by mail or dropped off at a county elections office, polling place, or designated drop-off location. Those ineligible to vote can work as a poll worker or plan a voter registration drive instead.

Guest speaker Liu closed out the session by answering questions on how  youth can become more politically engaged, invoking some of his personal experience in government. Liu encouraged students to participate in more local levels of the political scale, emphasizing the large influence city and county governments have on society.

“I think that it is important that [the youth] starts paying attention [to politics] because there are so many things that are coming up on the ballot that are not just about voting rights,” Liu said. “[There are] things that will impact your future, that you guys should be paying attention to.”

The “Know Your Rights” workshop will repeat on Sunday, Sept. 27 and two more Saturdays in October. Those interested in participating can register online up until the day before each session.