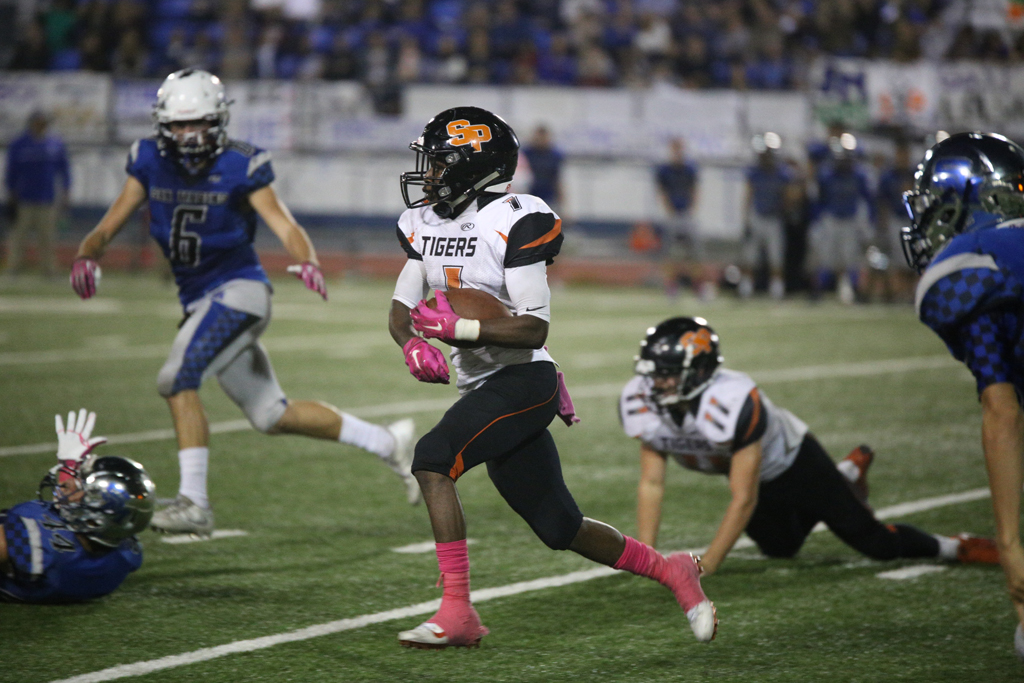 South Pasadena fell to the Monrovia Wildcats with a final score of 46-16 on Friday, November 4.

The Tigers exited the locker room under the Homecoming and Senior Night atmosphere around them. Despite this, Monrovia was the first team to cross the endzone after less than seven snaps of the football, scoring off of a quarterback sneak once reaching the Tigers two yard line. The Wildcats would miss the PAT to make the score 6-0, 9:31 in the quarter.

South Pas was slow to respond on offense after a Wildcat sack pushed the line of scrimmage back 13 yards into Tiger territory. After grinding their way to Monrovia’s side of the field, senior receiver Ben Quirk fired up the Tiger offense in the form of an 11 yard reception, following another 11 yard catch to help South Pas reach the Wildcats redzone. This would be as far as the Tigers got in the first quarter, after a fumble by South Pas was recovered by Monrovia at the 25 yard line.

Trying to slow Monrovia’s advance, Quirk, now lined up at linebacker, slammed the Wildcat quarterback on the ground on third down and eight yards to go. Monrovia managed to find an open, man regardless of the defense’s efforts, and eventually scored off of a 36 yard touchdown pass late in the first quarter.

Senior receiver Jalen Ross tried to build momentum for the Tigers’ offense in the form of a 12 yard pickup. However, South Pas would ground out to the Wildcats at their 44 yard line and punt away. The Tigers were determined to halt the Monrovia offense, after junior defensive end Sebastian Centrone-Castro converted a sack on the Wildcats quarterback. Monrovia, however, managed to convert a first down to keep their offense on the field. Senior linebacker Anthony Seguin fired back with a sack on the QB to force a Wildcat punt. The Tigers slowly moved into Monrovia’s red zone a few plays later. Ross produced effective numbers in the team’s running game, helping the Tigers reach the 5 yard line, but failing to score on third down and resulting in a field goal.

Monrovia fired back in with a 55 yard passing frenzy to the five yard line, where they punched a third touchdown in the endzone to make the score 20-3. The Wildcat onslaught would continue in the first half after Monrovia scored two more touchdowns, with the last touchdown scored 2 seconds before the half ended for a score of 39-3.

Coming back into the second half, South Pas chiseled away at the Wildcats defense, reaching Monrovia’s 30 yard line. From here, senior quarterback Adam Arellano connected with Ross to score the Tigers’ first touchdown of the night, 10:08 into the quarter. Monrovia countered back with a touchdown of their own the following possession for a score of 46-10.

Both teams cleared their benches for the duration of the second half, subbing players in and out of the game. The Tigers only other touchdown came off of a trick play with Luna-Long at quarterback, who threw it to Ross downfield for a 42 yard touchdown late in the fourth quarter. Monrovia took a knee the next play to run down the clock for a final score of 46-16.

With this loss, the Tigers conclude the regular season with a 3-2 record and tie for second place with La Cañada and San Marino High Schools. South Pas football continues its 2016 season next week with their next opponent scheduled to be announced on Sunday, November 6.