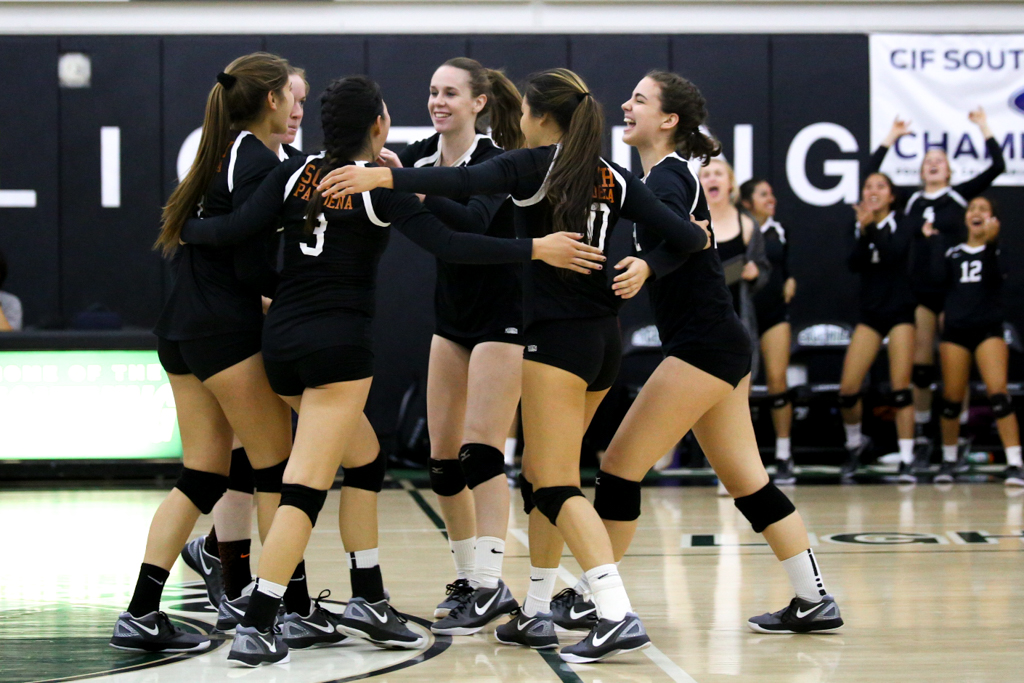 The girls’ volleyball team concluded its season and CIF run after being defeated by the top seed Sage Hill in the second round of CIF. The Tigers’ hopes of continuing into CIF were quelled as they fell in three hardfought sets with scores of 19-25, 23-25, and 17-25, at the Lightning’s home. While South Pas remained fairly even during the first two sets, it fell behind in the third and were unable to stretch the game further.

Blockers Harper Fox and Kimi Brown tip a hit by the Lightning.

The Tigers were able to earn and maintain a lead for a majority of the first set. This was largely due to the offensive prowess of senior Molly Feldmeth and many attacks on the Lighting defense from juniors Harper Fox and Maddie Saito. Senior Maddy Hirano also able to give the Tigers defensive support to try to secure the lead, and also aced the Lighting. However, Sage Hill managed to pull in front of South Pas as the set progressed. Eventually, despite putting up a strong fight, the Tigers fell 19-25 in the first set.

South Pas took an early lead, though only by a two-point margin, at the start of the second set. However, Sage Hill soon tied the game and slowly pulled ahead off of kills. Undeterred, the Tigers fought to remain close and the two teams stayed within a couple points of each other until the set finished. Feldmeth continued to provide much of South Pas’ offensive power, and senior Kate Kutzer also dominated for the Tigers. Hirano continued to be the core of South Pas’ defense with digs and strong serve-receive, and also had another ace. The Lightning, however, were still able to earn several kills and blocked many of the Tigers’ spikes, leading to rallies throughout the match. Fox also had kills, and senior Megan Wong earned points off of two consecutive aces. Despite this strong effort, Sage Hill concluded the set at 23-25 with a kill past the Tiger defense.

Feldmeth immediately garnered the first point of the third set with a block, though an out of bounds block from South Pas tied the set at 1-1. After tying at 4-4, the Lightning began to break away, scoring four points before Kutzer responded with a block to give the Tigers a point. However, Sage Hill held on to the momentum and widened the gap in points between itself and South Pas. The Tigers struggled to put spikes past the Lightning defense and also had trouble keeping Sage Hill’s hits in play. A string of errors from South Pas such as touching the net and touching the ball twice on sets cost the Tigers key points as the third set wound down. Feldmeth was able to earn South Pas’ final point before a Tiger accidentally grazed the net while trying to keep a dig in play to finish the game at 17-25, a disappointing end to the Tigers’ overall successful season.

Harper Fox spikes the ball in the third set against the Lightning.

“[Losing] was a bittersweet feeling,” Hirano said. “I’m glad that we’ve come so far and I’m really proud of all that we’ve accomplished, but I’m also sad to see that the season is over. I’m going to miss this team. We really went for every ball and truly tried to touch everything [today]. We fought hard against a really tough team.”

This loss closes out the Tigers’ 2016 season. Despite a rocky start in preseason, South Pas fought to win second in Rio Hondo and upset Poly in the first round of CIF. While unsuccessful in moving forward in CIF, the Tigers are proud of their performance this season.

Finish Ticket returns to LA at the El Rey