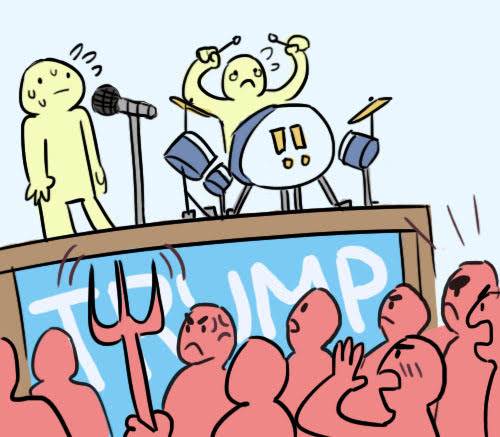 At first glance, President Trump’s difficulty finding musicians to perform at his inauguration seemed simple; no artist wanted to be associated with a figure whose words and policies have alienated so many. Many performers knew that they would be ridiculed or looked down upon by much of the public if they were mentioned in the same breath as the incoming president. This, however, is terribly unfair to the artists who choose to perform at the inauguration. While the event will bestow the highest office in the land upon a highly controversial figure, it still carries with it many meaningful traditions that emphasize the importance of American democracy and performing on such a day has nothing to do with the politics of the musician.

Whenever someone new is elected to the presidency, there’s a peaceful transition of power. The previous president leaves a handwritten note on the desk in the Oval Office, and shakes hands with the new president as they head out. There is no desperate grab for power, no final gambit to maintain control, simply one person leaving and another taking his place. The inauguration celebrates this transition and our democratic system as a whole. It is American symbolism at its best: celebratory and showy, flashy and grandiose. To perform at one of these events, no matter how divisive the president being inaugurated is, should be treated as a great honor and a historic opportunity.

Inaugural festivities have featured prolific musical guests since the 1940s, with the largest names including Frank Sinatra, Bob Dylan, Aretha Franklin, Beyonce, and James Taylor. For some, performing at the inauguration is about career building; the ability for a musician to place themselves on the same list as cultural icons is invaluable. It’s an incredible way for lesser-known musicians, such as the historically black Talladega College marching band, to expand their audiences.

Furthermore, an artist does not have to endorse the beliefs of a president to perform during the ceremony. Artists state what they believe in through their music and the songs which they perform. For example, English singer and X-Factor runner-up Rebecca Ferguson was willing to perform if she could sing ‘Strange Fruit’, a song regarding the lynching of black people in the South. And while she eventually declined, she was willing to sing on her terms and to use music as a means to educate the masses that tuned in to the inauguration this morning.

Some artists are performing in spite of Trump’s policies. Jackie Evancho, the 16-year old singer who is expected to perform the National Anthem, is doing so despite having a transgender sister, Juliet, who is undergoing sex confirmation surgery today and has publically supported Jackie’s decision to perform. Jackie should not be demonized for believing that it’s an honor to perform music for people across America and to be asked to follow in the footsteps of artists like Beyonce or the great Aretha Franklin.

An artist’s performance during the inauguration shouldn’t be about politics or disagreements, because the inauguration is about something much more important than any one president. It is about the peaceful transition of power and the tradition of the handwritten note on the desk. It is about showcasing essential aspects of our democracy. We shouldn’t vilify musicians for choosing to perform during an event of such national importance, and we shouldn’t discourage them from it either. Sometimes performing is not a political statement nor an endorsement. Sometimes a gig is just a gig.