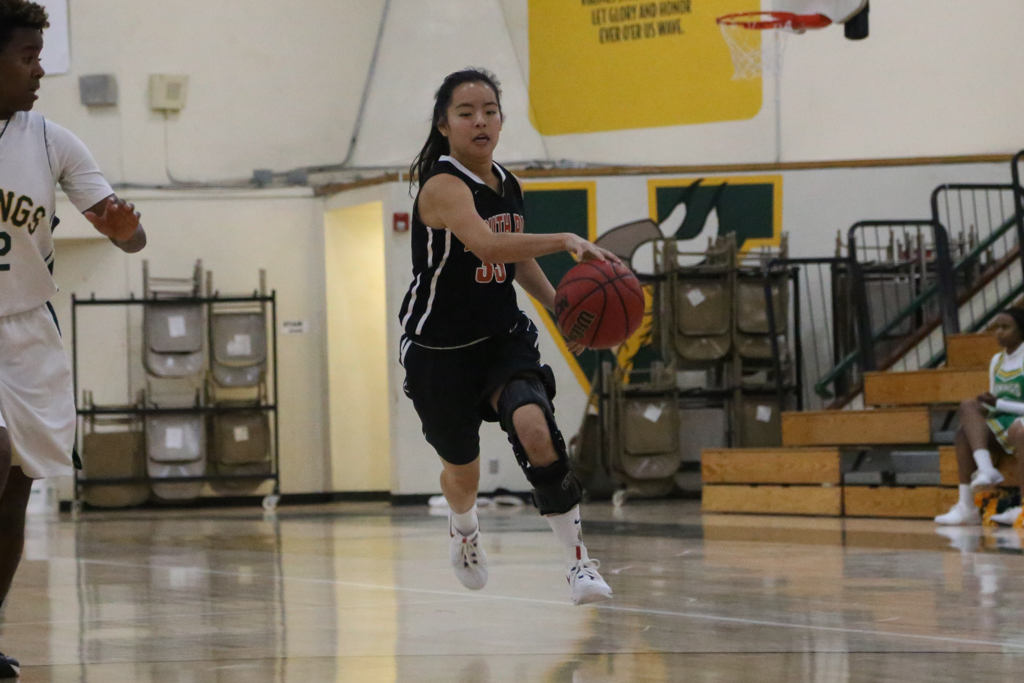 The girls’ basketball team destroyed Blair 66-13 on the road on Friday, January 30. The Tigers’ dominance on the court was unrivaled by the Vikings, and this victory puts South Pas’ league record at 4-0 and overall record at 10-6. Even though the team was clearly the better of the two, the Tigers struggled to put away many of their opportunities throughout the game.

South Pas immediately gained possession of the ball but was unable to make its first few shots. Soon after the girls scored their first basket of the game, a three pointer, they unrelentingly pressured the Vikings to earn a 19-0 lead. Senior captains Jalynne Li, Jade Lin, and Juliana Tom contributed largely to this effort, as did junior captain Tiffany Holmes. Sophomore Lauren Kafkaloff was most noticeable, however, as she scored many of the Tigers’ points and intercepted a majority of Blair’s passes the few times the Vikings were on the attack. Despite this lead, South Pas was not playing up to its full potential. Its passing appeared slower than usual, and a vast number of shots did not fall. Even so, this did not hinder the Tigers, who ended the first quarter with a 26-2 lead.

Early in the second quarter, sophomore Flannery Clark sank a three after several missed shots from various Tiger players. The Vikings managed to put another point on the scoreboard after their best player was awarded a free throw. Defensively, South Pas rarely allowed Blair access to the basket with interceptions and steals. The Vikings’ lack of ball control aided to this effort, as one player was doing a majority of the opposing team’s work. The Tigers continued to pound away and widen the gap in score between the teams. Junior Phoebe Kim scored to put South Pas up 36-5 and soon followed with an impressive block. A few minutes later, Holmes grabbed a rebound from a Blair shot and sprinted down the court for a layup. Kim sank another shot, the Tigers’ last of the quarter, before an awry Blair shot went out of bounds right as the quarter ended. South Pas went into halftime leading 46-5.

Kafkaloff quickly scored at the start of the third quarter and Li swiftly followed suit. After earning a 56-7 lead, the bench players were rotated in. While these players were able to control the game, Blair did find more opportunities to score than it had previously. The Vikings rarely took advantage of this, only making shots a couple times. The Tigers also were unable to capitalize on their many opportunities, as shots would just barely bounce away from the net. Despite the large number of chances, South Pas could not score for the rest of the quarter, which finished at 56-11.

The starters did not come back in during the fourth quarter, and the Tigers had better luck making shots during this period. Junior Naomi Kruzic and sophomore Kayla Zhang scored most of these points. South Pas also stepped up defensively, limiting the Vikings to only one basket during the fourth. The girls pounded the hoop with shot after shot, but only a few would fall. As time ran out, Kruzic attempted a final layup that was swatted out of bounds by a Viking player. The Tigers won by a wide margin of 53 points, ending the game at 66-13.

South Pas plays La Cañada at home on Wednesday, January 25. Previously, the Tigers fell to the Spartans twice in league.