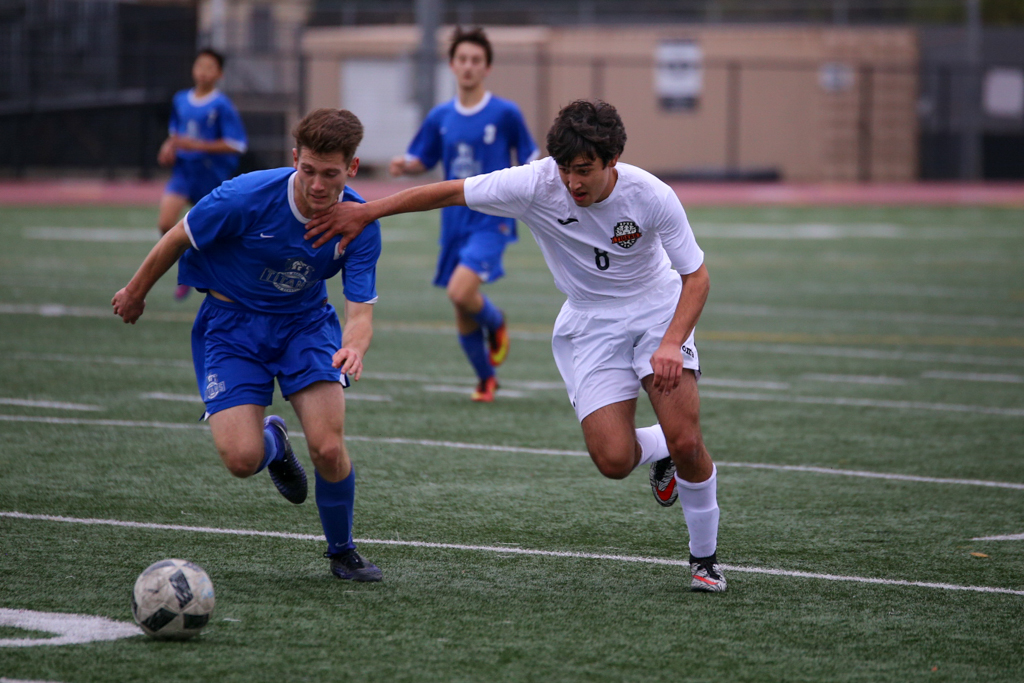 Boys’ soccer secured its second victory of Rio Hondo League after sending the visiting Titans home with a final score of 2-1 on Wednesday, January 18. South Pasadena now stands with a 2-1 league record and a 5-3-2 overall record.

Opening the match, the Tigers were determined to show their home field dominance with junior Niko Tripodis firing away at the Titan goalie early in the game. However, it was not until senior Brian McKenzie took advantage of a San Marino defensive miscue that the Tigers would score. After beating his initial defender, McKenzie continued to drive down the right side of the field and proceed to take the go ahead shot while most of the Titan players were out of range to help.

After this goal, both teams went cold offensively. The rivals exchanged possession of the ball throughout the first half with the Tigers severely depleted on defense as junior captain Hank Rainey was hurt in the half, while senior captain Max Amido was unable to play do to a prolonged groin injury. In place for the two lockdown players, the South Pas’ second string managed to shut down the Titans for the duration of the half and hold the lead at 1-0.

Coming back into the second half, the Tigers’ second string began to show its flaws as a very early San Marino drive allowed the Titans to score a goal and tie the game 1-1. South Pas failed to pick up on an open man who kicked the 11 yard goal before the Tigers could react San Marino continued to capitalize on its newfound momentum with repeated strikes at the Tigers’ defense. Despite this onslaught, the Tigers held out against the Titans. The home team was able to answer back shortly after with sophomore Ryan Wong breaking away with the ball up the left side of the field, only to lose possession on a bad pass near the goal. Although Wong failed to capitalize on the opportunity, junior captain Jack Renken fired back minutes later with a game winning goal 20 minutes into regulation.

Neither team would generate any further momentum from this point on as bad passing and shots from both sides drew the game out to a close and a 2-1 victory for the Tigers.

“It feels good to get the win against San Marino,” McKenzie said. “[Moving forward] I think we need to build on our chemistry and I think this win will give us confidence and we have the skill to go to playoffs.”

South Pasadena will face off against Blair High School on the Vikings’ field on Friday, January 20.