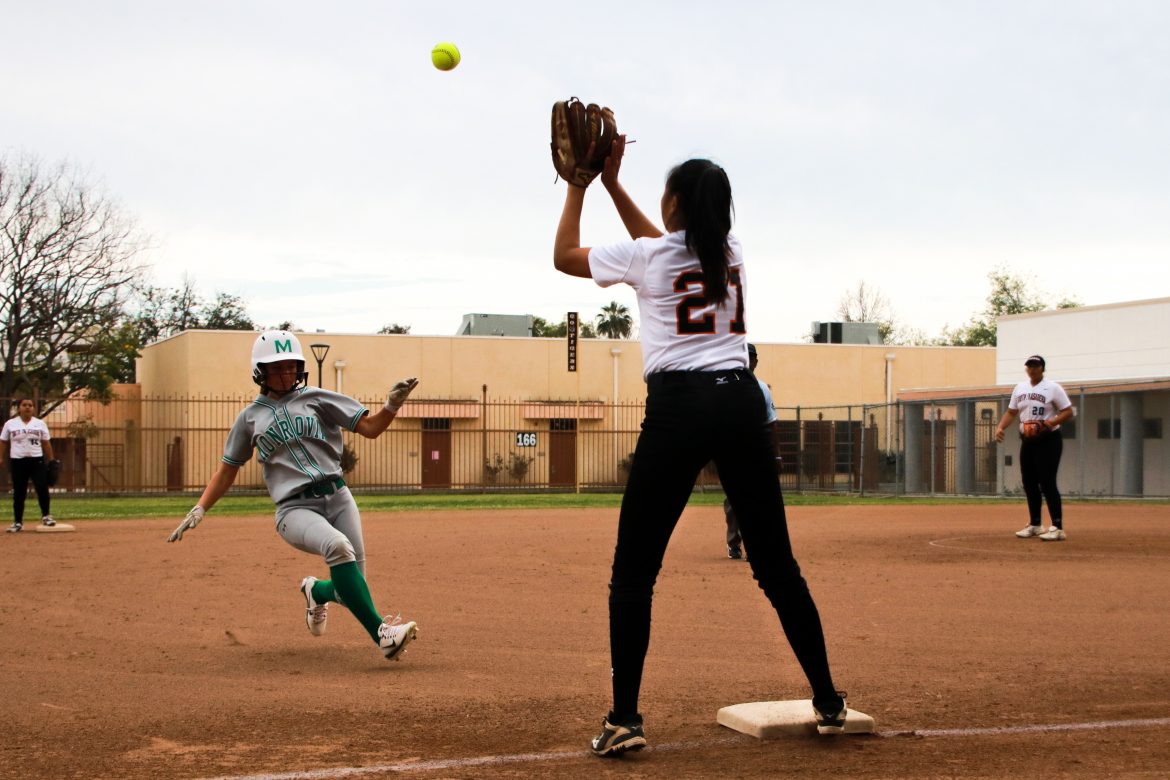 Sophomore Carissa Park attempts to tag out a Monrovia runner at third.

The Tigers fell behind in the first inning, ultimately setting them back for the rest of the game. The Wildcats scored the first run of the game due to a South Pas pitching error. SPHS subbed in their pitcher for junior Stella Benton, who made an effort to turn the game around in favor of the Tigers. However, Monrovia was still able to score two runs with two triples. The bottom of the inning didn’t serve the Tigers well either, as the Tigers went three up, three down.

SPHS started to gain momentum in the bottom of the second inning, scoring two runs and tying the score at two. The game began to look up for the Tigers due to weak pitching from Monrovia, allowing South Pas to gain free bases. Sophomore Carissa Park scored a run after a base hit by junior Kat Castro. Senior Katie Wooton was able to steal home on a passed ball.

The score remained tied 2-2 for the entirety of the third inning; Monrovia scored a run in the top of the fourth. South Pas began to falter, and with the Wildcats scoring six runs in the fifth, a defeat was imminent. In the bottom of fifth, sophomore Camryn Pearson ran out a double on an outstanding hit. However, the effort was too little too late.

Although the remainder of the game was bleak for the Tigers, sophomore Gillian Terhune performed admirably in her first varsity game, scoring a run in the bottom half of the sixth. The game ended when senior Justene Fernandez was tagged out at home, with Monrovia securing the 13-3 win.

SPHS softball will have the chance to beat La Cañada in a road game on Friday, Mar. 22, at 3:30. They previously lost to the Spartans by a score of 9-0.