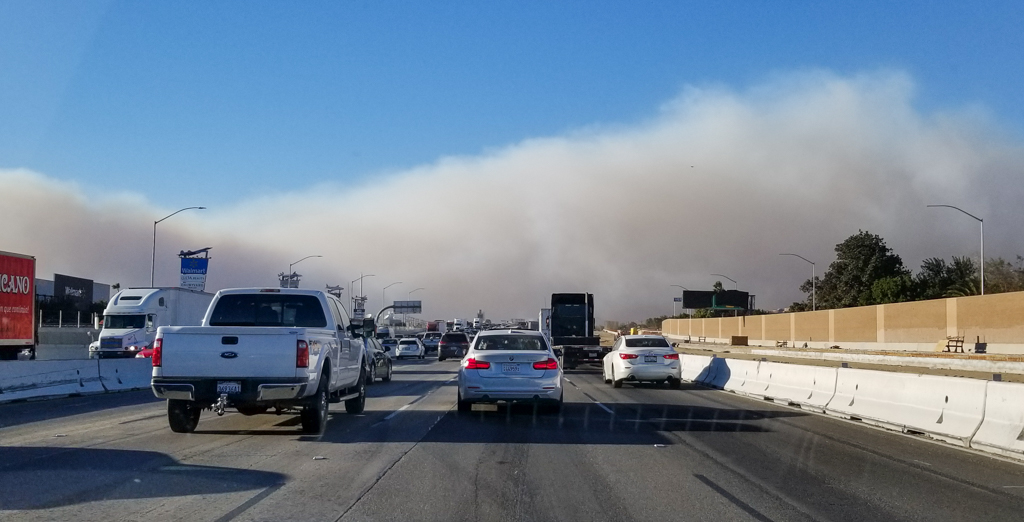 The Creek Fire is one of many intense fires burning in the Los Angeles area. After charring 15,323 acres, many nearby evacuated residents have recently began to return, among them some SPHS faculty members.

Fires blaze throughout Southern California during early and mid December, burning countless acres and forcing thousands of evacuations. The impact of the Creek Fire on the west side of Los Angeles has extended its impact to SPHS, where some members of staff are receiving ash instead of rain this December.

Among the most affected by the fires at SPHS are Career Technical Education Instructor & SkillsUSA advisor Sandra Matson-Fennell and computer science teacher Garrett Shorr. Both Matson-Fennell’s and Shorr’s houses are threatened by the Creek Fire, near Tujunga, with fire crews expecting to have the blaze fully contained by December 23 due to a drawn out battle against stubborn Santa Ana winds.

Along with her neighbors, Matson-Fennell watched the wildfire crawl along the mountain above the Tujunga wash, a tributary of the Los Angeles River. Matson-Fennell has watched three fires from her home, yet she calls the Creek Fire “unnerving”.

While her neighbors were packing their bags and getting their children ready to go, Matson-Fennell was keenly watching the mountains after a night of powerful 70 mph wind gusts. Despite seeing smoke from the top of a nearby mountain on Tuesday morning, Matson-Fennell chose to go to work like it was a normal day but also to take her dogs with her.

“I didn’t know what [the fire] was going to do,” Matson-Fennell said, “I actually brought them in the first day to the dog boarding place.”

Despite her uncertainty about the movement of the fire, Matson-Fennell declined to evacuate.

“It was [mandatory but] the fire was burning the other direction,” Matson-Fennell said. “It was far enough away from the house that we just sort of watched it for several hours and then we ended up staying at our houses that night.”

Shorr, from Arleta, was in the direct path of the smoke cloud of the Creek Fire.

“When I woke up that Tuesday morning I was directly in the path of the smoke cloud,” Shorr said, “It was like if you were in a fog cloud but it was all smoke. I couldn’t tell if the fire was right across the street.”

Even though he was more than eight miles from the evacuation zone, not knowing where the fire was made Shorr nervous.

Shorr teaches all levels of computer science at SPHS, also serving as advisor for SkillsUSA and the Coding Club.

“I had to spend some time researching where the fire was before I felt comfortable leaving home,” Shorr said.

After realizing that the fire had to jump two freeways and burn its way through a large residential zone, he became more comfortable leaving his house for the day. Before leaving, he made sure all the windows were sealed, but despite his efforts the entire house smelled like smoke for the greater part of a week.

While both teachers would take different items with them in a hurried evacuation, both shared the idea that stuff is stuff and can be replaced, but as Matson-Fennell mentioned, “your life can’t be replaced”.

The fire broke out early last Tuesday morning and rapidly approached residential areas, forcing officials to declare widespread mandatory evacuations. The evacuations affected over 150,000 households. Of the 150,000 households asked to evacuate, many –– including Matson-Fennell ––  made the decision to take a chance and remain in their home.